An Outlander tour of Scotland

I’ve been an Outlander fan since I was 17, when my best friend Caitlin handed me a paperback copy of the series. We’ve bonded over the series, first over the books and now the television show, and we both have this year’s premier date, 4th November, circled on our calendars.

For many fans, a trip to Scotland is a way to get closer to the characters. Not only can you visit the places that play such a pivotal role in the stories, you can also see the filming locations and travel with a driver-guide who’s knowledgeable about the series and may even have personal anecdotes to share about its filming.

Frank and Claire’s relationship in Glasgow 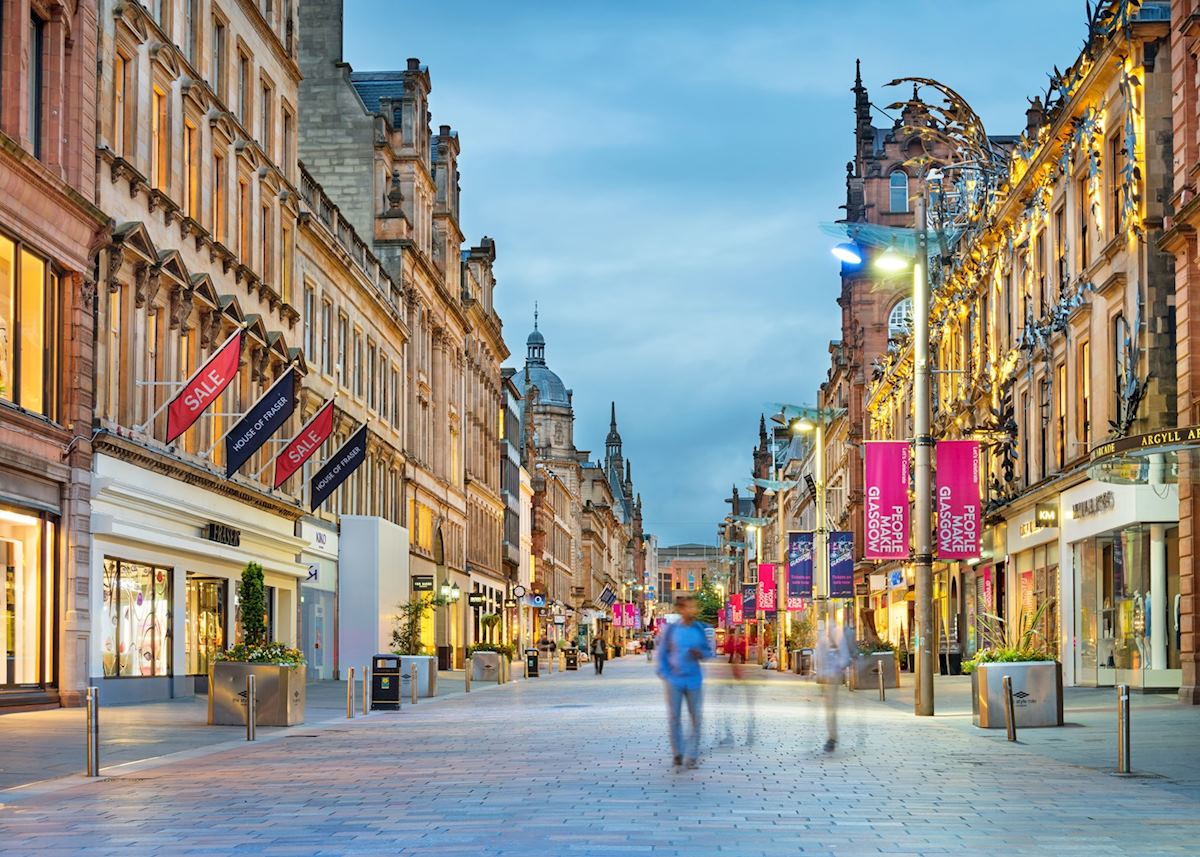 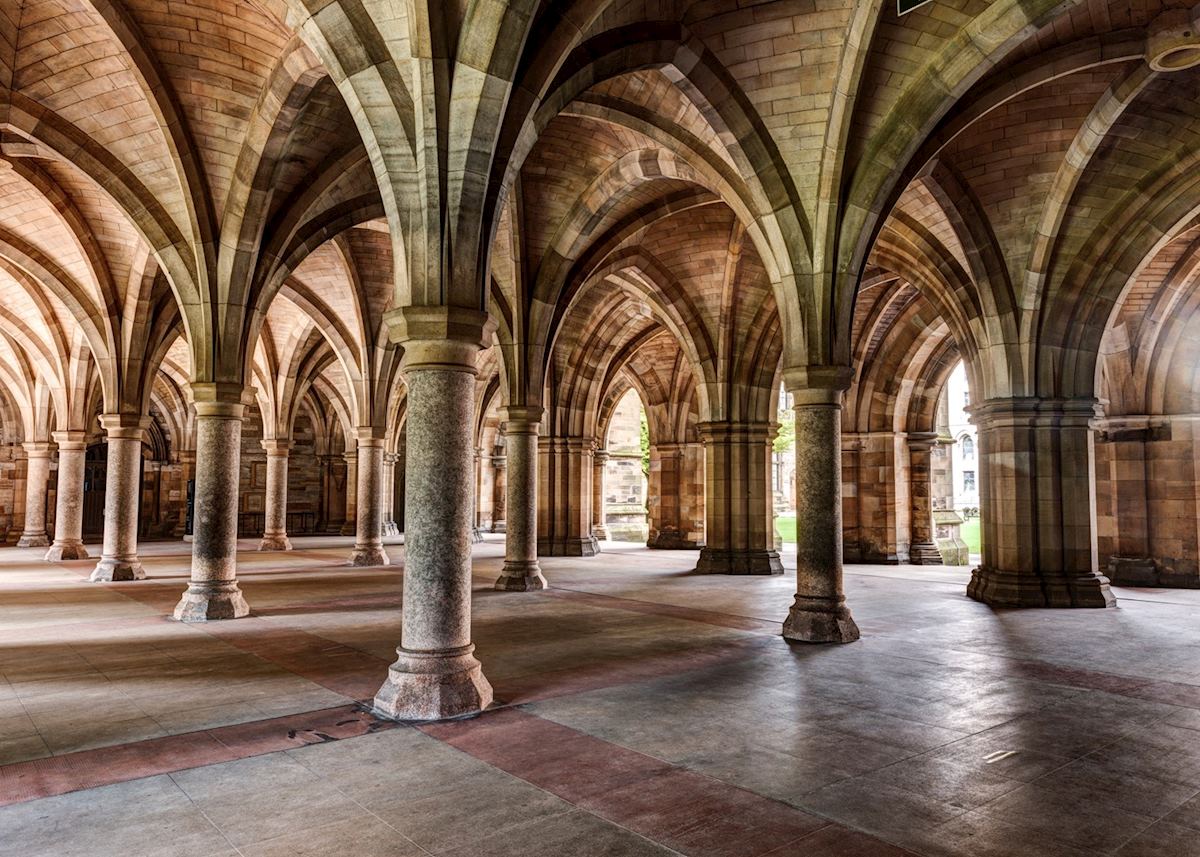 Glasgow isn’t mentioned in either the show or the book, but parts of the city’s gritty streetscape have served as filming locations, mostly for the 20th-century story parts. That, combined with the small international airport, makes it a good place to start your trip.

In the second season, Claire volunteers at L’Hopital Des Anges outside of Paris. Those scenes were shot in the severe, rib-vaulted crypt of the Glasgow Cathedral, an imposing Gothic edifice that dates back to 1136 and is one of the few Scottish churches that survived the Reformation.

A short walk away, the Glasgow City Chambers are where Frank spontaneously proposed to Claire. And, across the city, the University of Glasgow doubled (unconvincingly) as Harvard University, where he taught.

Tranquil wilderness and brutal history in the western Highlands 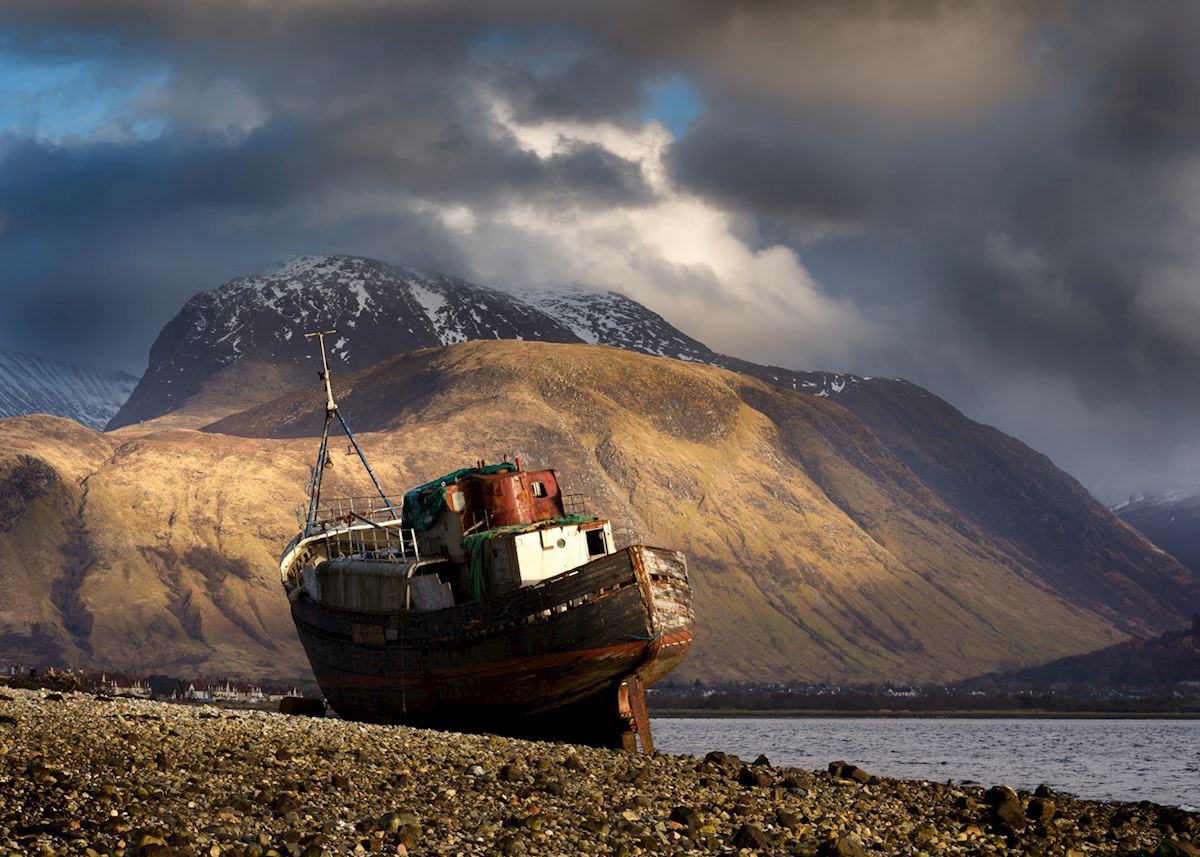 Heading north, you’ll drive through western Highlands. Here you’ll find pristine valleys hemmed by steep, steel-grey mountains, where the valleys turn a gentle purple when the heather blooms. The landscape is unspoiled, much as it would have been during the 18th century, and it features in the show’s opening credits, as well as Skyfall and several Harry Potter movies.

Along the way, you can explore the wilds of Glen Etive. Here, herds of red deer scamper across the road and deep lochs reflect the changeable sky, which can be deep blue one moment and a moody mass of clouds the next.

You can also visit Glencoe, the site of a pivotal moment in the pre-Outlander Jacobite uprising of 1689-92. This is where the MacDonald clan was brutally massacred when Chief Alastair Maclain signed the loyalty pledge a few days after the deadline.

Though Fort William plays a key role in the series, there’s no longer a fort in this sleepy, residential town, and nothing was filmed here. However, this is an excellent place to explore the West Highland Museum. Though it’s small, this museum has a comprehensive exhibit on the rising of ’45, with exhibits including Rob Roy’s sporran and Bonnie Prince Charlie’s embroidered silk waistcoat.

The Battle of Culloden at Inverness

The biggest city in the Highlands, Inverness is where the clans were finally and brutally crushed at the Battle of Culloden. Once known as Drummossie, Culloden Moor is a wide and windswept place littered with stone headstones that mark where different clans died under the onslaught of the Red Coats’ muskets. A stone cairn stands in tribute to the fallen.

The Battlefield Visitor Centre offers a complete and sensitive introduction to the rebellion, in general, and the battle specifically. Because the site is legally protected as a war grave, the big battle scene wasn’t shot here, but in a field near Glasgow. For me, it was much more moving to walk among the grasses and find the stone that marked the mass grave of Clan Fraser.

A short drive from the battlefield, Clava Cairns is a Bronze Age burial site that has special resonance for fans. Though no scenes were filmed here, the cairns and standing stones are thought to have inspired the fictional stone circle, Craigh na Dun, which flings Claire backwards in time. Experts estimate the site is about 4,000 years old and was used by locals for at least a millennium.

While you’re in Inverness, you can also take a private cruise of Loch Ness to cross the mysterious body of water and have the chance to explore the dilapidated remains of Urquhart Castle. The castle played a small role in the Jacobite rebellion of the 1600s, when William and Mary’s small force fought off a much larger number of Jacobites. The English garrison destroyed the castle to prevent it from falling into Scottish hands, and today the broken walls and shattered towers are a peaceful place to admire the loch’s still, deep waters.

Culloden House is the best option for Outlander fans. A gracious Georgian mansion covered in ivy and set on well-groomed estate, this is the house where Bonnie Prince Charlie himself stayed before the great battle. Scenes from the show were shot here and you can stay in one of the elegant rooms.

Closes and castles in Edinburgh 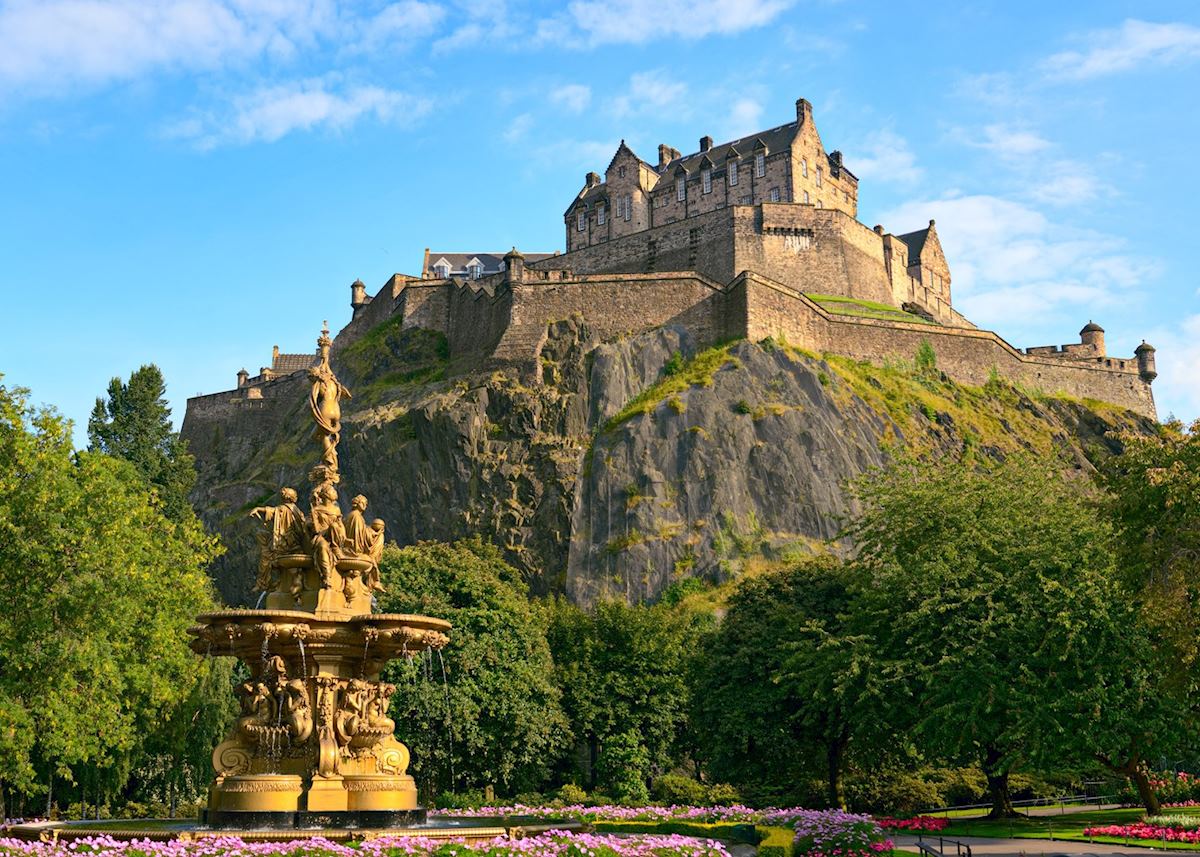 With Edinburgh’s grey Gothic buildings, cobblestone closes and grand castles, it’s no wonder that the show’s location scouts choose to shoot many of the historical scenes here. The narrow Bakehouse Close stands in for the exterior shots of Carfax Close and Jamie’s print shop, where Claire and Jamie reunite. This is one of the city’s best-preserved closes and you’ll find the Museum of Edinburgh next door. Nearby, Tweeddale Court was the setting for the market where Claire is reunited with Fergus.

Both the closes are just off the Royal Mile, the street that stretches from Edinburgh Castle, high on the hill, down to Holyrood Palace. The palace is where, for six weeks in 1745, Bonnie Prince Charlie set up his royal court. He threw extravagant balls in the Great Gallery, dined in front of an adoring public in the Queens Ante-Chamber and slept in the sumptuous bed that you can still see in the Queen’s Bedchamber.

The palace is still a working royal residence and closed to visitors when a member of the family is staying there. Be sure to check for the royal flag before you visit —Queen Elizabeth always visits for Holyrood Week, which is usually late June to early July.

Holyrood sits on a vast park, which includes Arthur’s Seat, a hill that’s shrouded in myth and offers views across the city. On the other side of the park, the grey, grim ruins of Craigmillar Castle played the role of grey, grim Ardsmuir Prison, where Jamie was jailed after Culloden.

You can easily spend half a day rambling through the grounds and exploring the many nooks and crannies inside the castle walls. The top floor of the tower offers views across the park and the bottom floor is said to have hosted Mary Queen of Scots when she took refuge here in 1566.

While you’re in the city, there are several excellent hotels. The Balmoral offers a grand and graceful option, but devoted fans may want to sacrifice elegance for the chance to stay at B+B Edinburgh, a small guesthouse where extras stay during filming. 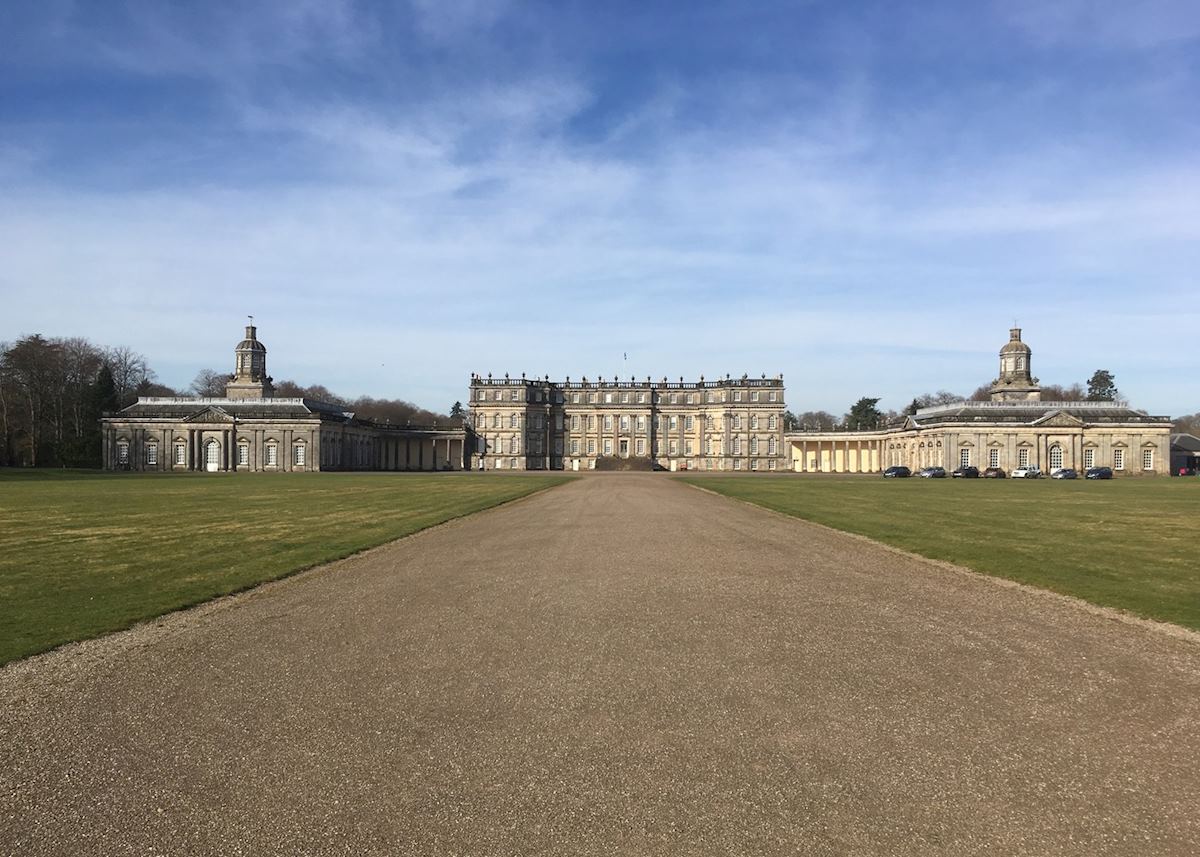 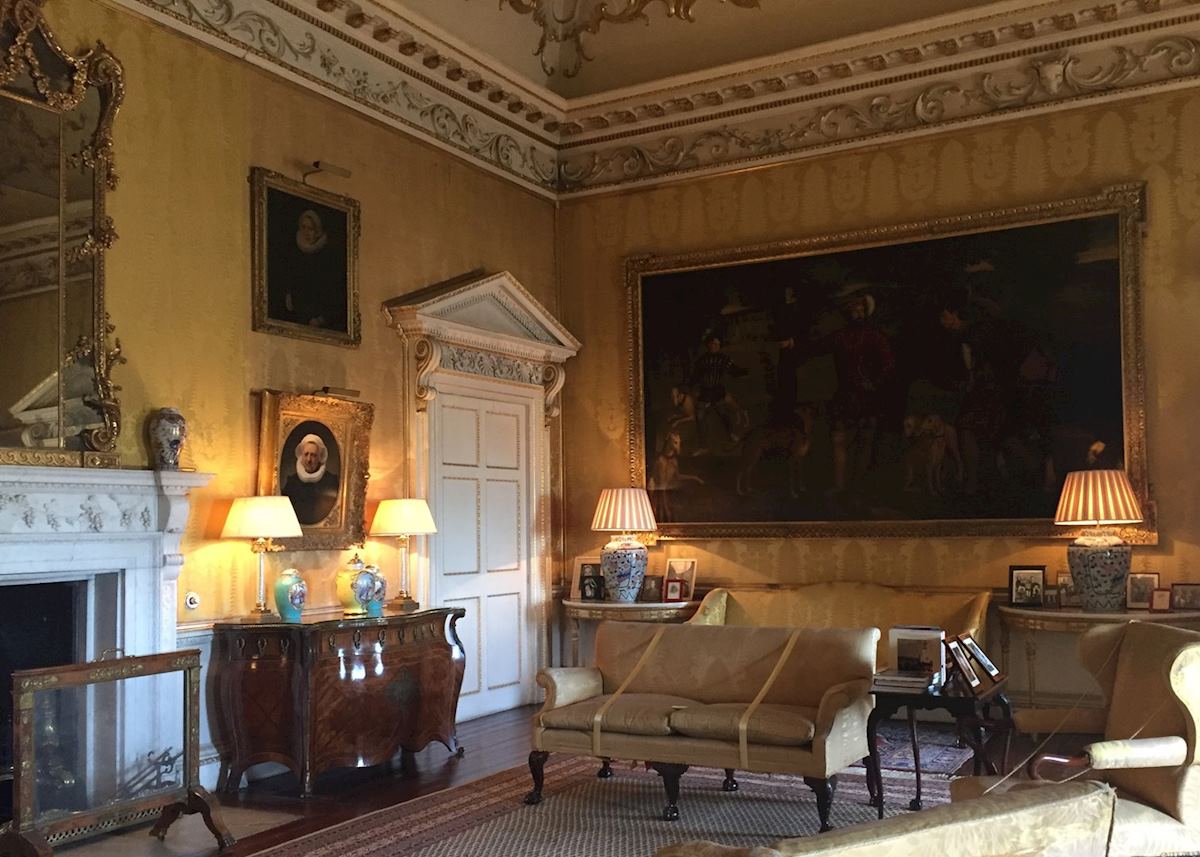 Just outside of the capital, you’ll find three of the most recognizable filming locations, which you can easily see on a driving tour.

Located just under an hour outside the city, the ruins of Linlithgow Palace are used in shots depicting Jamie’s imprisonment in Wentworth Prison. The Renaissance pleasure palace was a much-loved royal retreat that marked the halfway point between Edinburgh and Stirling. You can wander through the maze-like interior, climb the towers for far-reaching views and admire the oriel windows in the royal bedrooms. The prison scenes were shot in the stone corridors and imposing entrance.

If Fort William is a bit of a disappointment in its modern incarnation, the ruins of Blackness Castle should make up for it. The plain-faced castle sits at the water’s edge on the Firth of Forth’s stony shores, a dour grey fortress that makes a suitable setting for Black Jack Randall’s Fort William headquarters. Today, it looks exactly as it did when Claire and Jamie’s daughter, Brianna, wandered through in the 20th century.

Blackness is sometimes called ‘the ship that never sailed’, because the curtain wall is shaped like the prow of a ship. Inside, the rooms are echoingly empty and feel cool even on a summer day. Last time I visited was right after I watched the gut-wrenching episode that included Jamie’s brutal flogging and the whole place felt foreboding.

The final stop on the tour was much more uplifting: Hopetoun House. This grand country manor is one of the finest examples of Scottish architecture, making it a fitting setting for the home of the Duke of Sandringham. The low, wide house, with symmetrical wings and a columned façade, has been the stronghold of the Hope family since the 17th century and is still a working family home today.

You can tour the house’s interiors and admire the high ceilings, plush tapestries and period furnishings that have been lovingly preserved for more than three centuries.

The house and its grounds are so vast that many different scenes have been shot here. In addition to the ducal palace, different parts of Hopetoun House have played the role of the Hawkins estate, the stables at Helwater, Ellesmere and several scenes set in Paris or Versailles.

But the best part about visiting Hopetoun is only available by special request. Tucked away in the outer reaches of the house’s sprawling grounds is Midhope, a toy-sized 15th-century castle. The interior is derelict and you can’t go inside for your own safety, but fans will immediately recognize the exterior as Lallybroch, Jamie’s home. Walking up the lane to the diminutive castle, the mist curling around the courtyard gate, I felt like I was walking into the novel itself.

read more about trips to scotland 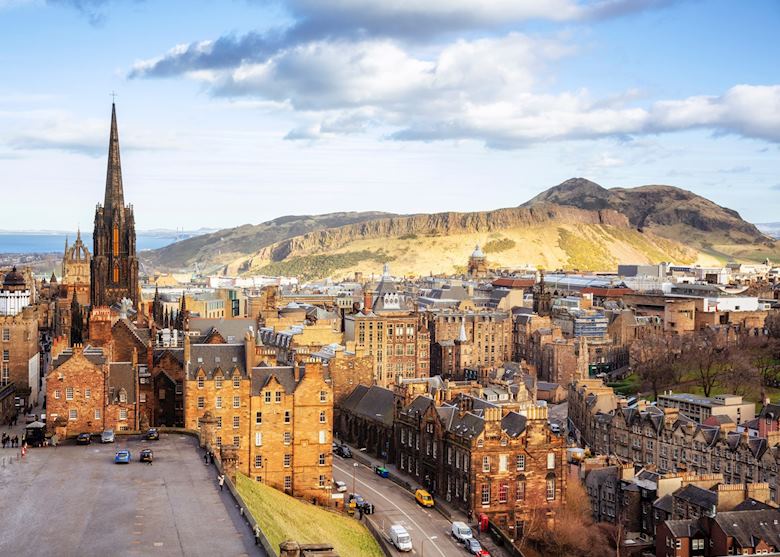 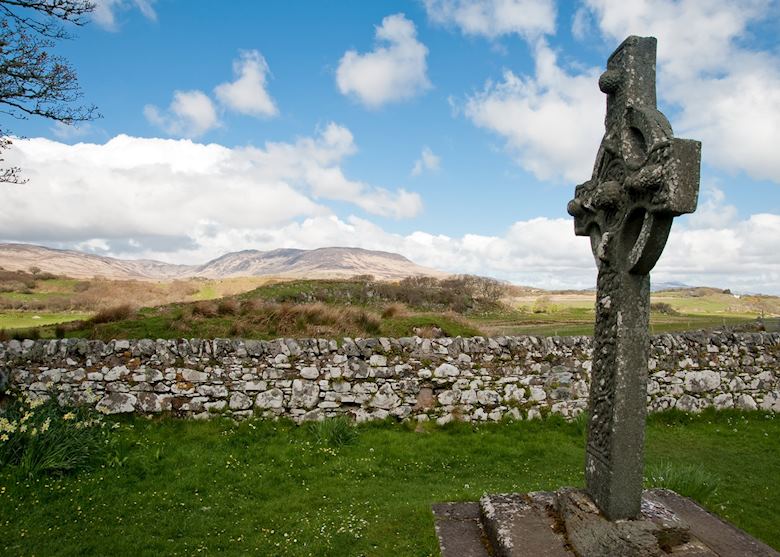 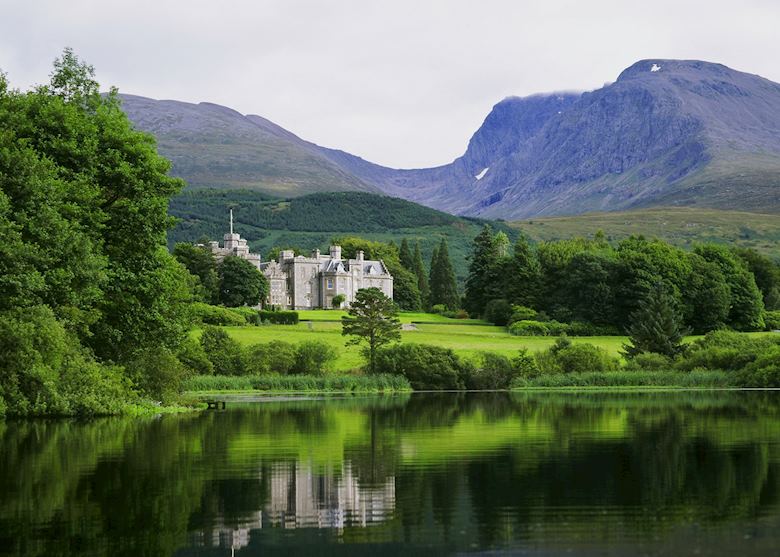