Strategically set on a naturally protected bay on the Argolic Gulf, Nafplio has attracted international attention for centuries. It was held by the Franks, Venetians and Ottomans in times past, and later served briefly as the first Greek capital.

It’s one of the most attractive towns along the coast, its faded grandeur and tangle of narrow streets, chic cafes and small museums an appealing medley of historic styles and influences.

Above it sits an imposing fortress, while sandy beaches are just a short walk away. The town also makes a great base for exploring the nearby wine region and ancient sites of Epidavros and Mycenae.

Nafplio was an important port in the Middle Ages, fought over by international rivals and fortified by the Venetians in the early 18th century. Their Palamidi Fortress sits high above the town, a sturdy castle dominating an already scenic landscape.

The fortress played a major role in the Greek War of Independence, and you can still see the Venetian symbol of the Lion of Saint Mark above the gateways. It’s a steep, hot climb to the fortress, but impressive views of the Argolic Gulf are your reward for walking the 1,000 steps to the top.

The streets below have been strongly influenced by their historic occupiers, too. The heart of Nafplio’s old town remains a jumble of ancient walls, Turkish fountains, Venetian mansions and historic monuments.

Narrow cobblestone streets drip with bougainvillea, and the central Syntagma Square is surrounded by grand public buildings and Ottoman mansions. In the bay, a rocky islet is topped by yet another Venetian fortress.

You can take a boat trip or kayak to the island, which was first fortified in the 15th century, and explore the Bourtzi fortress. Defence post, prison, home of the public executioner and erstwhile luxury hotel, the fortress has had many uses since, but now it’s best known for hosting summer performances. The island and fortress are illuminated by night.

Along the narrow streets of the old town, you’ll also find a series of museums exploring the town’s history. The archeological museum occupies a grand Venetian mansion and holds displays of Mycenaean figurines and reconstructed frescoes from the ruins of Tiryns.

There’s also a war museum chronicling the region’s historic fate, and a folklore museum with exhibits of traditional embroidery, costumes and household items as well as period rooms recreated in detail.

Stroll along the headland jutting into the sea from the old town and you’ll reach the remains of three further castles, known as the Akronafplía Fort. It’s a good destination for a quiet stroll, and you’ll come to the town beach, Arvanitia, on the southern shore of the headland.

In summer, this stretch of sand can be busy, but meander along the coast to the south and you’ll find a series of small beaches.

Perhaps most pleasant of all, though, is to sit in the main square or in one of the many waterfront cafes and idle over a drink or a meal, soaking up the atmosphere and just watching the world go by.

Nafplio makes a pleasant destination at any time of year, but it’s at its best between May and October, when the weather is settled and sunny. July and August are the hottest months, with temperatures reaching 35 C (95 F). They’re also the busiest times, especially at weekends, when crowds from Athens escape here from the city.

Our itineraries will give you suggestions for what is possible when you travel in Nafplio, and they showcase routes we know work particularly well. Treat them as inspiration, because your trip will be created uniquely by one of our specialists.

We’ve selected a range of accommodation options for when you visit Nafplio. Our choices usually come recommended for their character, facilities and service or location. Our specialists always aim to suggest properties that match your preferences.

Our specialists seek out authentic ways to get to know the places that could feature in your trip. These activities reflect some of the experiences they've most enjoyed while visiting Nafplio, and which use the best local guides. 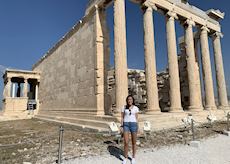