Established in 1651 Irkutsk grew to become the administrative and cultural center of Siberia.

Following an attempted coup d'état in 1825, Tsar Nicolas I exiled a group of his childhood friends here (the Decemberists) who gave the city something of a noble air, and led to it being dubbed ‘the Paris of Siberia’ by Russians.

After a devastating fire in 1879 the city was rebuilt by its rich merchants, and many of these brick mansions and grand public buildings still stand today in the compact but pretty center. 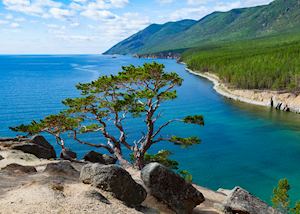 Well served by train or plane from Moscow, Irkutsk is both an essential stopover on the Trans-Siberian railway and a destination in its own right, with the beautiful Lake Baikal on its doorstep.

Our itineraries will give you suggestions for what is possible when you travel in Irkutsk, and they showcase routes we know work particularly well. Treat them as inspiration, because your trip will be created uniquely by one of our specialists.

We’ve selected a range of accommodation options for when you visit Irkutsk. Our choices usually come recommended for their character, facilities and service or location. Our specialists always aim to suggest properties that match your preferences.