Audley’s founder Craig Burkinshaw is leading a small group trip to Kenya this November. It combines four days on safari with a five-day stay at Bogani Cottages and Tented Camp.

Unlike any of Kenya's other camps, at Bogani you’re given a genuine opportunity to get involved in local life and make a real difference to the people you encounter.

Getting involved with Bogani and Free the Children

Bogani is operated by Me to We, the social business arm of the development charity Free the Children. Craig explains how we became involved with this extraordinary organisation.

'I’ve been passionate about the positive effects that high-quality tourism can have since founding Audley. So when a friend told me about the work of Craig Kielburger and his Free the Children initiative and insisted I should meet him, I was intrigued.

'When I met Craig, I discovered Free the Children has development projects running in eight countries, from Sierra Leone and Gabon to Nicaragua and India. Most incredibly, it had all been started by a group of 12 year-olds in an ordinary school in Toronto. Having learned about child slavery, they’d resolved to really do something about it.'

An enlightening first visit to Bogani

'Craig invited me to Africa to see the results of the organisation’s work. A few weeks later, a group of us landed on a remote dirt airstrip in rural Kenya. Our lodgings were a shady safari-style camp with wonderful food and equally wonderful staff. The camp was run as a business, which helped to generate funds.

'Over the next four days we discovered how the organisa­tion had evolved.

'From humble beginnings in the mid 1990s, with the children holding meetings at their parents’ houses, much has changed. The first initiatives led to raids on factories that used child slave labour. But they soon realised this didn’t solve the underlying problem. The strategy rapidly developed into a much more considered and methodological, long-term approach to tackling poverty.'

'From absolutely nothing, over 650 schools and school buildings have been built. Some 30,000 women are now economically self-sufficient and over one million people have been provided with clean water, healthcare and sanita­tion in Kenya, Hai­ti, Ecuador, Sierra Leone, Gabon, Nicaragua, China and India.

'And, children staying in educa­tion has wider, deeper effects. Girls who are well educated often marry later and are more informed about health prac­tices, thus reducing instances of child mortality.'

Some 30,000 women are now economically self-sufficient and over one million people have been provided with clean water, healthcare and sanita­tion.

'Today, millions of young people are actively involved in 5,500 Canadian, 1,550 US and over 1,000 UK schools. They have run stadium-sized events – ‘We Days’ – for 200,000 children per year, celebra­ting social action in the pursuit of large-scale drives against bullying, homelessness and child labour.

'Sixteen thousand young people attended the first UK We Day, all of whom had earned their tickets by taking action. Speakers included Al Gore, Clive Owen, Richard Branson and Prince Harry. But the highlight for me was the speech given by Malala Yousafzai, the Pakistani schoolgirl shot by the Taliban. She encapsulates the whole ethos and purpose of Free the Children.'

Craig Burkinshaw is on the UK board of Free the Children.

Where you can get involved

If you’d like to include a stay at Bogani on your trip to Kenya, our specialists can take you through the options. You can also experience life with a local community and Free the Children’s work at Minga Lodge in the Ecuadorian Amazon or Araveli Cottages and Tented Camp in India. Or, join Craig on his small group trip to Bogani in November 2015. (Please note: group tours are not currently available to citizens in the US). 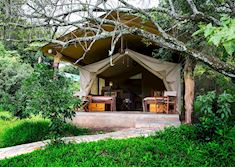