At home with a hilltribe in Thailand

Thailand offers so much more than beautiful beaches. Thailand Country Specialist Mark Hutton travelled to the country's lush north to dance, eat, harvest and hike with the fascinating Lahu hilltribe.

Tea time: Mark has a go at picking fresh leaves - which proves harder than it looks

To really experience a more authentic Thailand, you need to fight the temptation to simply collapse on one of its alluring beaches.

On my most recent visit, I set out to rediscover the more traditional Thailand that I first fell in love with 12 years ago. I'm delighted to report that it still exists.

I boarded my flight to the northern city of Chiang Mai, the region’s major hub. My main reason for coming to the north was to unearth authentic Thai experiences in the region’s verdant hills. Three hours’ drive north of Chiang Mai, close to the Burmese border, is the town of Fang. Frankly, few visitors would ever stop here; it doesn’t warrant a mention in the Rough Guide. I was here to visit the Phumanee Lahu Home Hotel and Homestay. 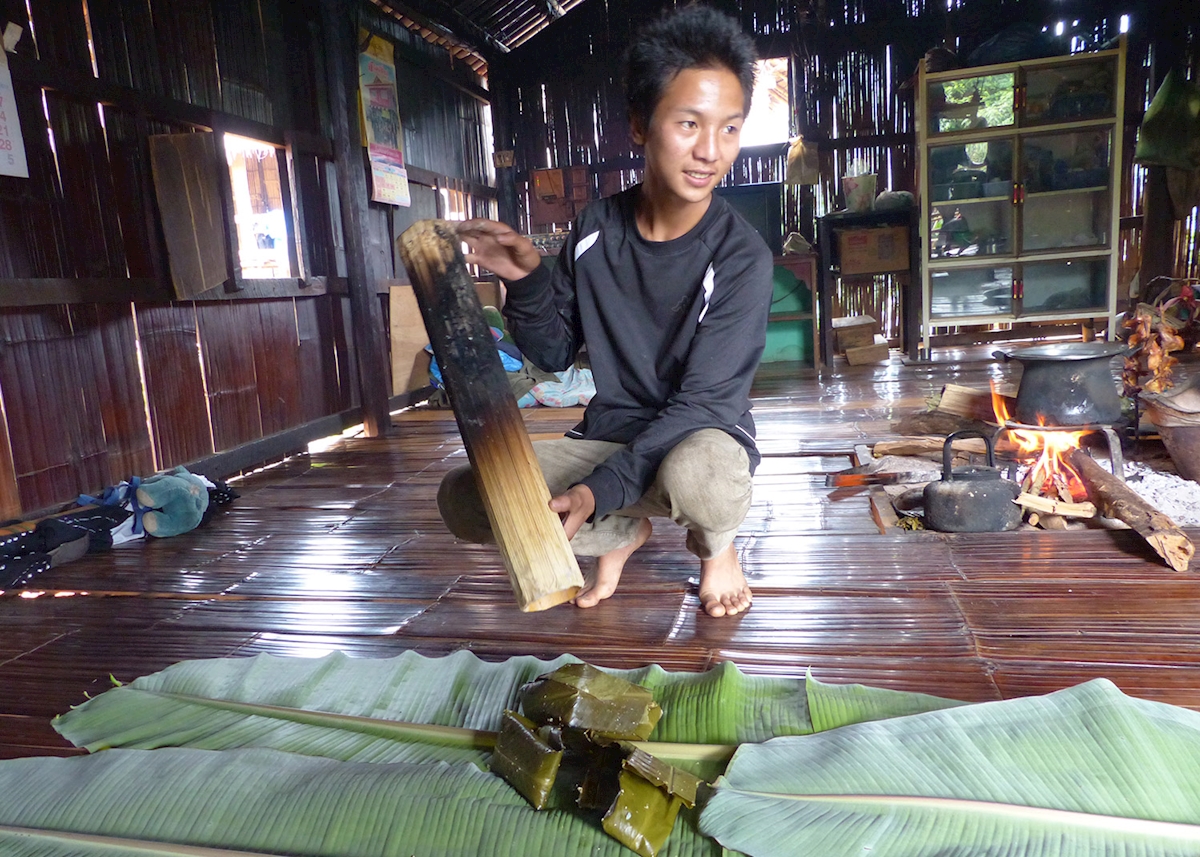 Meet the locals: Many of the Lahu tribe wear traditional black and red clothing and live in stilted wooden houses.

I was welcomed by a quietly spoken receptionist dressed in the traditional black and red dress of the Lahu tribe. Very professionally, in pointedly practised English, she began to recite the information necessary for new guests, but she fluffed her lines and descended into giggles. Jirawan, the hotel owner, explained in flawless English that the staff are all from the Lahu hilltribe, and are still in training.

We enjoyed a traditional meal of deep-fried tea leaves

That evening I ate a traditional Lahu meal including deep-fried tea leaves.Tea is hugely important in the history of the Lahu and many of the northern hilltribes. Until relatively recently opium was the major crop in this area. However, the tribes have been encouraged by the King’s Royal Project initiative to cultivate other crops for cash, tea being key in this shift.

Jirawan explained that her father was appointed by the king as leader of the hilltribe development group. She showed me a photograph of herself as a young girl kneeling with her brothers and sisters and her father in front of the king. She then explained that her father was shot in 1983 as a result of his work to move the hill communities away from opium farming. In light of this poignant back story and the obvious pride displayed by Jirawan and her Lahu staff, I couldn’t wait for my visit to their hill community in the morning. 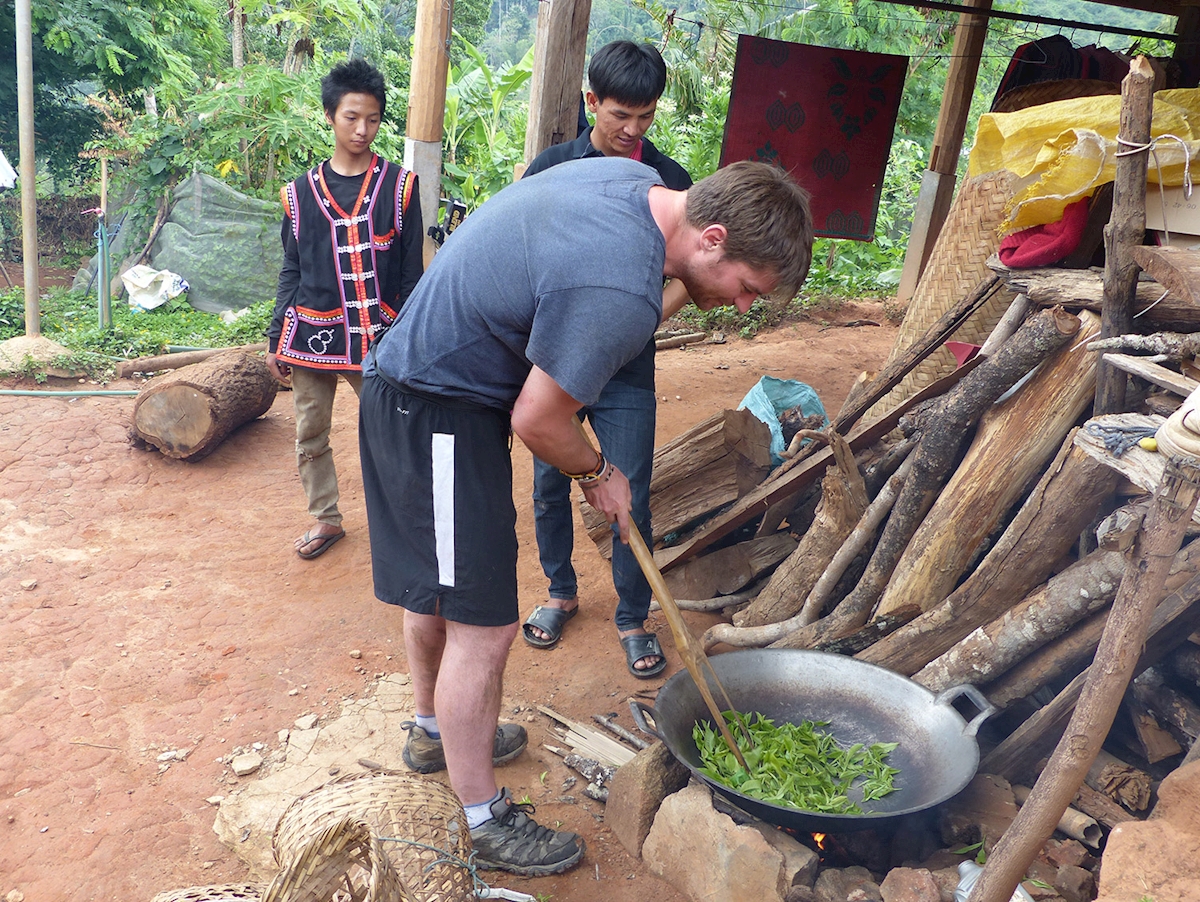 Village life: Visiting the Lahu community is a great way to see a truly authentic slice of Thai life.

The next day I set off with Teng, our Lahu guide. En route, we stopped to collect bamboo roots, ferns and green mango – all of which would be delicious with our lunch. Finally we reached the village of Pu Muen. A series of wooden stilted huts lined the dirt track into the community. The views over the valley would have been breathtaking, if I could still breathe.

We arrived at a particularly impressive hut and Teng ushered me inside. It was smoky and dimly lit by an open fire, over which hung a teapot. Teng produced a bamboo drinking vessel that he had carved on the hike up and a cup of tea was poured for me. An elderly lady appeared in the doorway, squatted down effortlessly and began chatting to my guides, gesticulating at me.

A second woman appeared at the door, a baby strapped across her chest, and sat cross-legged on the floor. The atmosphere was communal and relaxed. I couldn’t communicate much but seemed to be welcomed as a slightly amusing guest.

We shared lunch, served on pandanus leaves: sticky rice cooked over the fire in bamboo and a delicious chicken curry, washed down by tea picked from the village bushes.

Picking leaves in the tea plantation

After lunch, my guide took me into the tea plantation. After 15 minutes of picking tea leaves and barely covering the bottom of my basket, I gained a new respect for the industry of the villagers. I was shown the process, from picking to drying, and was encouraged to take part. 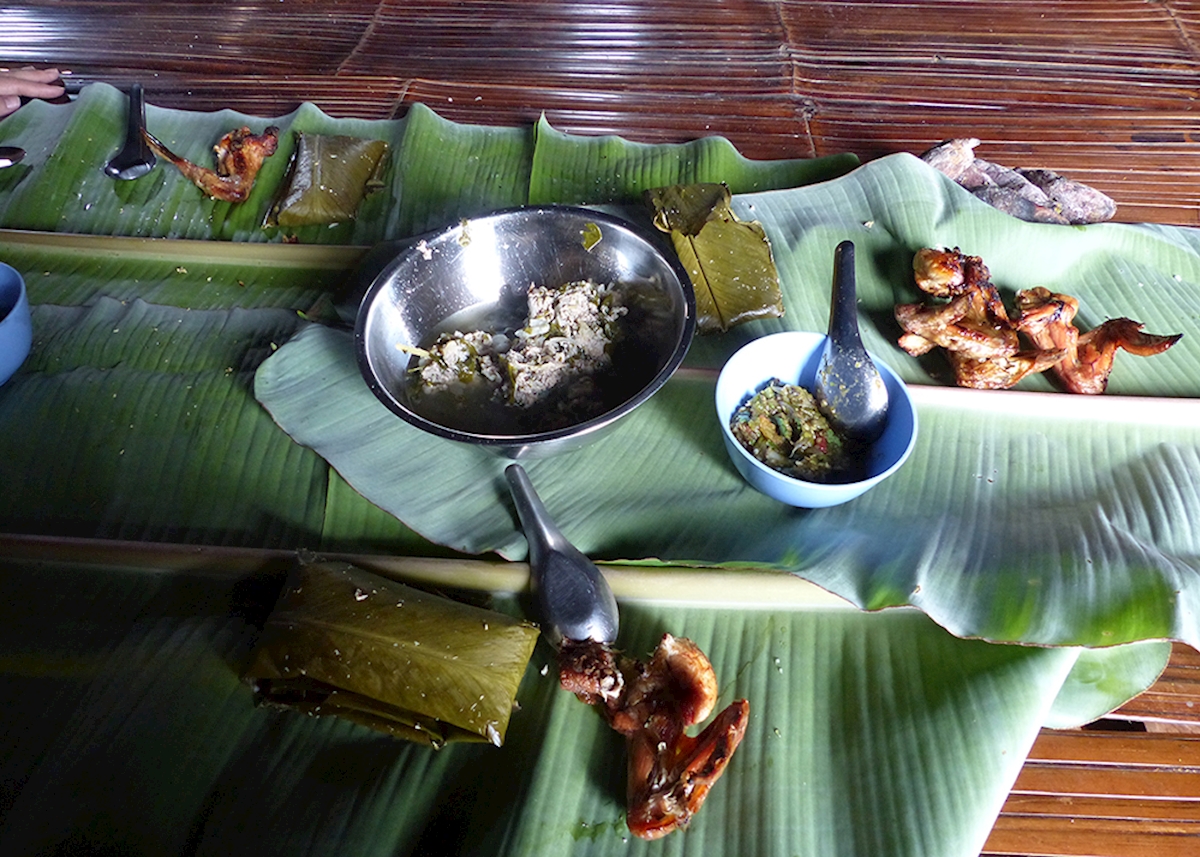 My attempt at rolling the cooked tea leaves was apparently hilariously inept; one of the elderly ladies stepped in to show me how it is done.

After this, I was treated to some Lahu music and dance. I was delighted by the joy of the participants (which included me!). The Lahu are proud of their traditions and their new way of life, which includes sharing their culture with those who want to explore Thailand beyond the beaches.