A city break in Cape Town coupled with a Kruger safari is what a trip to South Africa is all about for many. However, the country has much more to offer beyond these experiences.

There’s the urban sprawl of Johannesburg, once avoided but now emerging as a cultural hub in its own right; the lesser-explored west coast with its stretches of sand and ancient remnants of indigenous tribes; and the laid-back Winelands where you can go wine tasting in a patchwork of vineyards.

Our South Africa specialists have delved deeper into the country to find alternative experiences that may surprise you.

A walking safari is all about the smaller things in the bush, from plants and insects to birds and animal tracks. Offered as an addition to game drives in a few of South Africa’s parks and reserves, I find they add another dimension to your game viewing experience. Taking the time to stop and really look at your surroundings reaps huge rewards, and is only truly possible while out on foot.

During these walks, the quality of your guide really shines through. They may tell you stories about unlikely experiences they’ve had in the bush, reveal tiny antlions concealed beneath the sand, or explain the symbolism behind the buffalo thorn tree’s branches, which are believed to represent the ups and downs of life.

On my walking safari from Marataba Trails Lodge in Marakele National Park, we traced the movements of hyena and elephant whose tracks had been left in the ground, and my guide explained the increasingly positive relationship between local people and the area’s wildlife.

South Africa’s Winelands offer a completely different safari experience. Instead of seeing lion and elephant, you’ll sample some of the country’s finest beverages on a ‘wine safari’, moving between the region’s many vineyards on horseback, on foot or by bicycle. I also recommend Franschhoek’s ‘hop-on, hop-off’ Wine Tram, which stops at a selection of vineyards on a circular route.

Waterford Estate, near the town of Stellenbosch, offers tours through its vineyards in open game vehicles. Your guide will explain the wine-making process and the region’s wine producing heritage as you sample some of the estate’s finest tipples.

The wine valley around Hermanus, the Hemel en Aarde Valley, is not within the Winelands area so is often overlooked, yet produces some superb vintages. I suggest the Hermanus wine safari, where 4x4 vehicles take you around ten of the area’s vineyards. We can book you a table at Hermanus’ Creation restaurant for lunch. Here, amidst views over the valley and ocean, you’re given a series of delicious dishes that perfectly complement your chosen wines.

Johannesburg: a city of modern art, culture and food by Toby

Johannesburg is South Africa’s largest city, but its turbulent past has deterred visitors. In recent years, regeneration has revealed a different side to the city as art galleries, cafes, high quality restaurants and vibrant markets have sprung up in areas once deemed unsafe.

I recently visited the downtown Maboneng Precinct - a former ‘no-go’ area that has been transformed by financial investment and its optimistic local community. Buildings have been renovated into studio apartments, boutiques and galleries, but it’s the atmosphere that has undergone the biggest change.

Strolling through the outdoor market introduces you to the cool bohemian vibe of this district. Stalls sell everything from leather jackets to novelty sunglasses. In the evening, everything’s packed up and the music kicks in, so it feels like you’ve joined an impromptu street party.

The precinct’s bold street art is also a joy to explore. Huge murals depict well-known figures such as Nelson Mandela, indigenous tribes, African animals and scenes from everyday life. We can arrange a private walking tour with a local guide so you can learn about the stories behind them.

For top-class food and music, I highly recommend an evening at The Orbit in the trendy central suburb of Braamfontein. Here, jazz band performances create a lively atmosphere, providing a glimpse into contemporary South African culture.

While Kruger is situated in a malaria risk area, there are several malaria-free wildlife reserves within a four hour drive or short light aircraft flight of Johannesburg that offer excellent game viewing opportunities.

Situated on the border of Botswana, Madikwe Game Reserve sees far fewer visitors than Kruger. The reserve’s wildlife includes all of the Big Five, as well as endangered wild dog. One of my stand-out experiences was heading out at night to see black rhino. As we kept watch, we were surrounded by a herd of buffalo, who in turn were being stalked by a pair of hungry lionesses – game viewing at its finest.

Marataba is a private concession and luxury lodge within Marakele National Park, home to the Big Five, giraffe, cheetah and over 400 bird species. I recommend taking a sunset river safari along the nearby Matiabas River – I was lucky enough to see hippo wallowing in the water just a stone’s throw from my boat.

The mountainous landscape and grassy plains of Welgevonden Game Reserve provide habitat for various antelope species, brown hyena, aardvark and all of the Big Five. I particularly liked staying in Makweti Safari Lodge and watching over its waterhole; regularly visited by warthogs, impala and baboons.

The West Coast: beaches, history and wildlife by Anthony

After a break in Cape Town, I highly recommend self-driving along South Africa’s lesser-visited West Coast. Driving north from the city, Table Mountain gradually disappears in your rear view mirror and traffic begins to thin. An hour’s drive brings you to the beachside town of Langebaan. Here, people walk barefoot, kite surfers zip through the waves and low-key restaurants line the oceanfront. While I found the water was too cold for swimming, the beach’s soft white sand is ideal for a stroll, and you may even spot seals bobbing offshore.

Half an hour’s drive around the headland is Paternoster, one of the coast’s oldest fishing villages and now a popular weekend retreat for Capetonians. The beach restaurants here serve delicious fresh seafood and you can browse the shops and art galleries housed in pretty whitewashed buildings.

Two and a half hours northeast, the craggy red rock of the Cederberg Mountains creates a rustic backdrop to Bushman’s Kloof Wilderness Reserve. As well as having the chance to see African wildcat, eland and Cape mountain zebra, you can take a guided tour of the reserve’s ancient rock art, painted thousands of years ago by bushman tribes.

From here, you could drive all the way up to the Namibian border and beyond, stopping at Fish River Canyon - the largest canyon in Africa, or at one of the area’s abandoned mining towns whose colonial buildings are being reclaimed by the shifting sands.

Eating out: vegetarian, vegan and gluten-free options by Anna

South Africa is renowned for its succulent game and ostrich burgers, but there are other options. We’ve taken the time to seek out places where dishes for special dietary requirements aren’t just an afterthought. At these restaurants, the chefs have a creative and pioneering approach to producing meat, dairy and gluten-free meals, so dining is something you can look forward to.

In Cape Town, the Cape Grace Hotel’s Signal restaurant offers a vegetarian tasting menu that changes seasonally. Dishes may include cauliflower panna cotta and roasted leek velouté, each paired with local wine. Ingredients are sourced from local farms and the ocean, so everything tastes fresh.

The Winelands region produces some of the country’s best cuisine. In Franschhoek, the Mont Rochelle hotel and vineyard has a casual Country Kitchen restaurant. I really liked its picnic menus, carefully prepared for eating in the surrounding countryside. They feature vegetarian options such as tomato, mozzarella and avocado salad, and with prior arrangement the chef can adapt the menu to your specific dietary requirements.

Order your copy of our new South Africa brochure

Vibrant cities, varied wildlife areas, stunning beaches and outstanding food and wine – South Africa is a hugely diverse destination, providing travellers with an abundance of reasons to explore. Order your copy by post or by email today. 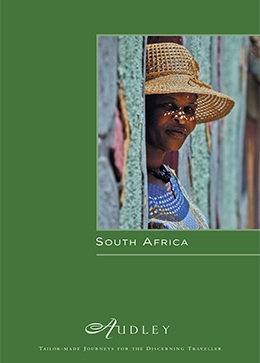 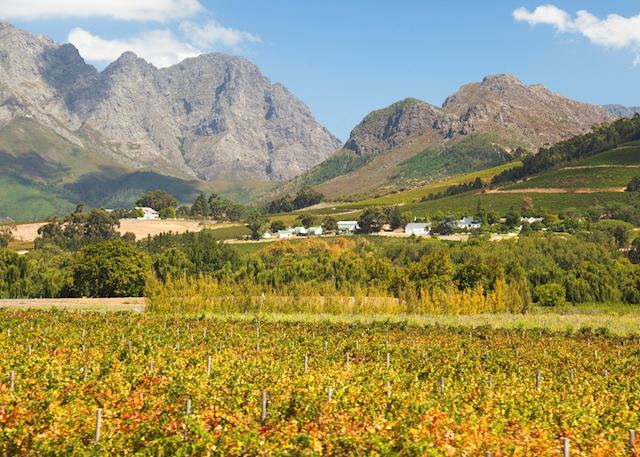