Two trip ideas for exploring the USA via New York

Think about what you want from a stopover destination and we wouldn’t be surprised if New York ticks all the boxes. Not only do its airports offer flights to almost anywhere in the USA, the city can conjure up something new to do, no matter how many times you pass through.

Here, our USA specialists share two ideas for combining a short city break in the Big Apple with a wider journey in the country. You might want to contrast the art displayed in New York’s galleries with that of Tucson and Santa Fe in the Southwest. Or, combine the food and architecture of New York with Americana along Route 66.

New York and Americana along Route 66

Tour New York’s streets by classic convertible, sample the city’s delicacies, and learn about its history and architecture with a local guide. Then, embark on a road trip along Route 66, stopping for deep-pan pizza in Chicago and taking in St Louis’ Gateway Arch on the banks of the Mississippi.

A tailored walking tour of Manhattan 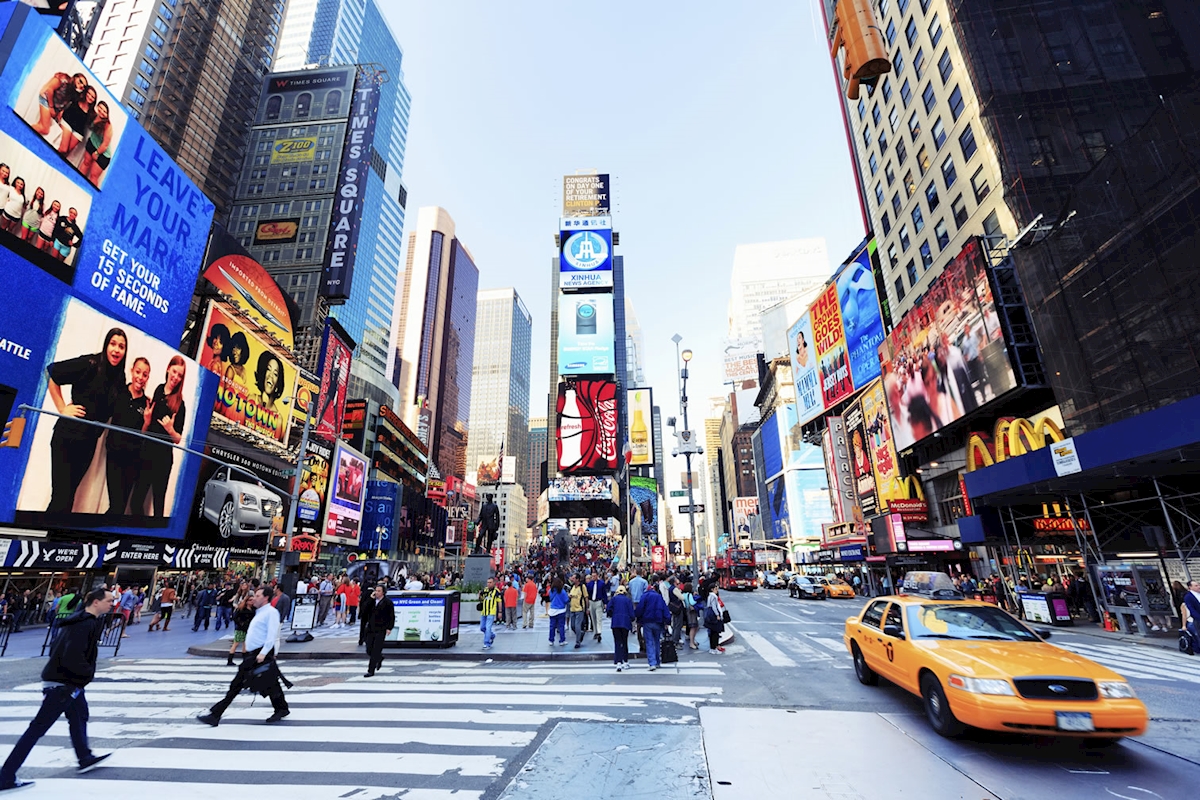 Having visited New York many times, I thought I knew the city well. But when I took a five-hour tour with native New Yorker Matthew Cummings, it soon became apparent that I’d barely scratched the surface.

Matthew has been a guide here for over eight years. His extensive knowledge spans everything from history, politics, architecture and art, to theatre, music and filming locations. It means that whatever your interest, he can tailor the tour to suit you.

Leading you on foot and via the subway, he can reveal hidden stories behind some of the city’s headline places, from Times Square to Greenwich Village, Chinatown and the Financial District.

You might explore Central Park and hear about how it’s changed over the years. Have some of the city’s key buildings and landmarks put into context — for example, I learned that the Bryant Park Hotel’s black and gold exterior was originally designed to pay homage to the American Radiator Company. Hear about some of the shows that have been performed on Broadway, or focus your day on the city’s food, art or museums. 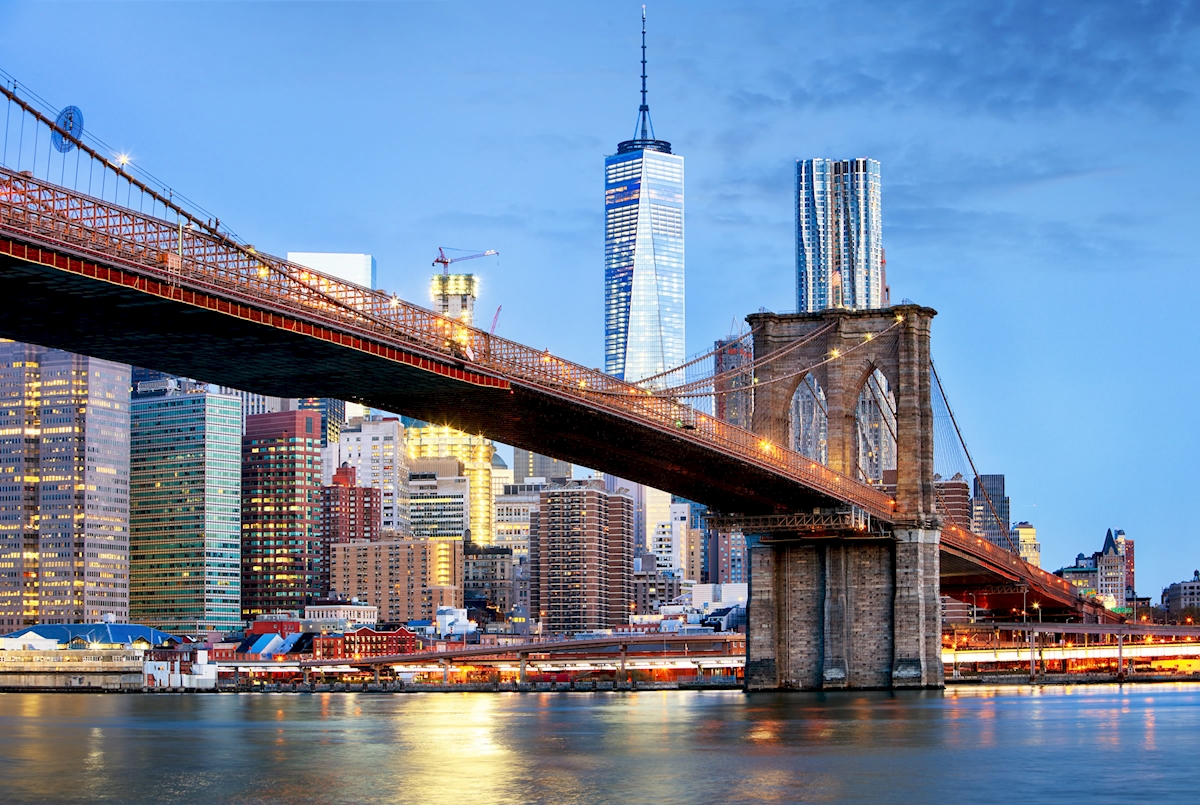 There are many ways to take in the city streets, but none so stylish as being driven around in a classic 1971 Buick Skylark convertible. My guide knew New York like the back of his hand, regaling me with tales about each of the areas we passed through and their history.

During the two-hour tour, you drive over Brooklyn Bridge, built in 1870, to explore Brooklyn. Back in Manhattan, you pass through Greenwich Village, and the shopping district of SoHo. Then Chinatown, which is home to the USA’s largest Chinese population, and Little Italy, where you hear about the many Italian immigrants who set up home in the late 19th and early 20th centuries.

You also visit the fashionable TriBeCa area, where the annual film festival is held, pass over Manhattan Bridge, and soak up the atmosphere in South Street Seaport on the East River, home to some of Manhattan’s oldest architecture, renovated mercantile buildings and sailing ships.

Having a private guide means you’re free to ask as many questions as you like about the city and the landmarks that you pass. That’s without mentioning the experience of being in a classic convertible. Feeling the wind rush past your ears as you cross Brooklyn Bridge, and hearing the sounds of the city streets as you drive through makes for a much more immersive experience than most regular tours. 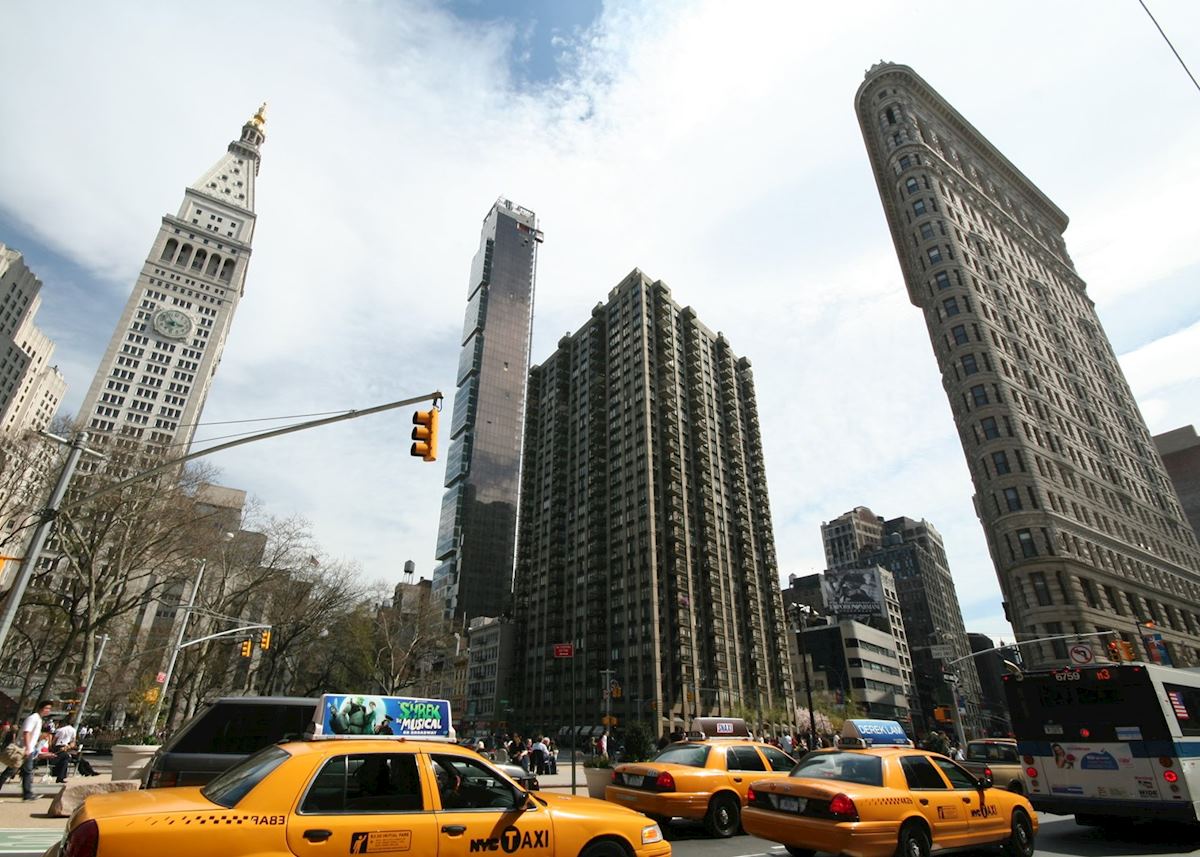 Not many visitors venture to the Flatiron District (named after the wedge-shaped Flatiron Building, one of the city’s oldest skyscrapers). But, on this three-hour walking tour, come to appreciate this well-preserved historic area. Your local guide tells you about the architecture of some of the district’s key buildings, including the Flatiron Building itself and the 19th-century Church of the Holy Communion and Buildings, framing it in the context of Manhattan’s development over the years.

Another main focus of the tour is trying quintessential New York food. You try six different dishes, each telling you something about the city’s history and culture.

On my tour, we visited Eataly — a large indoor, marble-ceilinged food emporium where shops and stalls offer up fresh Italian produce. You’re free to sample and buy anything from pastries and breads to pasta dishes and cheeses. Next we visited a tiny Jewish delicatessen, where I tried a Reuben sandwich (corned beef, sauerkraut, Swiss cheese and Russian dressing grilled between slices of rye bread).

Other highlights included visiting Beecher’s Handmade Cheese, where I was able to watch the cheese-making process in addition to sampling the finished product, and trying Jewish babka, a sweet cake where folds of dough are stuffed with chocolate and cinnamon. You finish the tour at Union Square where, on a Saturday, you’re free to wander around the weekly farmers’ market.

Continue your travels with a Route 66 road trip

A stopover in New York combines well with a road trip along the first section of Route 66, between Chicago and St Louis. While much of the historic Route 66 has been swallowed up by modern highways, parts of this first stretch will see you drive along the original route’s old-brick road.

Highlights along the way include sitting down to a traditional Chicago deep-pan pizza in Pizzeria Uno, the place of their birth (but be prepared to queue). I also like dipping in and out of the city’s blues bars and taking a cruise along the Chicago River, passing the city’s mix of old and new architecture.

At the end of your first day on Route 66, I recommend staying overnight in the city of Springfield, where you can visit the former home of Abraham Lincoln. The elegant clapboard property dates back to 1839 and has been restored to how it looked in 1860 — the year of Lincoln’s presidential campaign.

With a guide, you can tour the bedrooms, dining room, sitting room and kitchen, while learning about Lincoln’s home life and his rise from respected lawyer to president.

Your final stop, St Louis, is set on the banks of the Mississippi River. Founded by the French in the late 17th century, the city is home to a number of impressive churches and cathedrals, including the Cathedral Basilica Saint Louis, which contains the largest mosaic collection in the world outside Russia.

But, the city’s hallmark is the 190 m (630 ft) Gateway Arch. Set on the riverbank, it’s the world’s tallest arch, built in 1965 as a monument to America’s western expansion. You can ascend to the top for views over the entire city and the Mississippi, before learning about the arch’s construction and St Louis’ wider history in the underground visitor centre.

Art and culture in New York and the Southwest 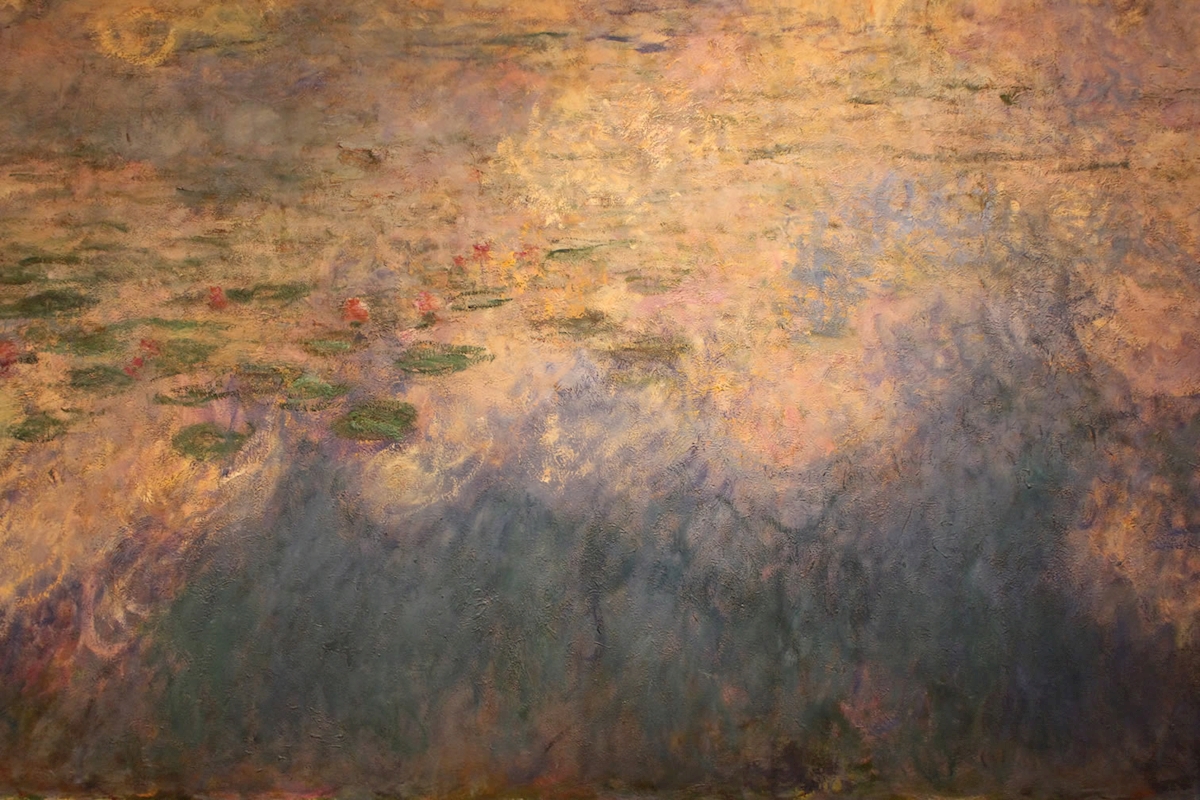 Situated in the Upper East Side of Manhattan, the MoMA’s extensive collection of modern and contemporary art features pieces by Western artists from the 19th century to the present day. From Van Gogh and Picasso, to Dali, Matisse and Pollock, visiting the museum is like walking through a ‘history of modern art’ textbook.

On this hour-long tour, you and a small group of others are guided through the museum by a MoMA lecturer after it has closed to the general public. This allows you to appreciate the artwork in peace and without interruption. Your expert guide tells you about each of the museum’s main pieces and the artists who created them, putting the work into context.

Among the pieces you’re shown are Van Gogh’s Starry Night — you can get close enough to see the thick, swirling brush marks. While this piece was smaller than I expected, a whole room is dedicated to Monet’s Water Lilies. Spanning three canvases along the entire room, it encompasses you as you sit on the long bench in front of it, taking it all in.

Afterwards, we can arrange for you to have dinner in the museum’s two-Michelin-starred restaurant, The Modern, which overlooks the Abby Aldrich Rockefeller Sculpture Garden.

Whitney Museum of American Art with an art expert

The Highline in Manhattan’s west side

The Whitney Museum of American Art holds a collection of more than 21,000 artworks from the 20th and 21st centuries by over 3,000 American artists. All of this is housed in a striking asymmetrical building designed by Renzo Piano. It provides an extensive look into American art, but with such scope, it can be difficult to know which pieces to focus on.

I recommend taking a one-hour tour led by either a Whitney Teaching Fellow or a PhD student in Art History. They’ll use their insight into the artwork and the wider context in which the pieces were created to reveal motivations and hidden meanings behind some of the key works on display. These might include paintings by Thomas Hart Benton, old photographs of New York taken by Ilse Bing, or Jacob Lawrence’s War Series paintings depicting his experiences of World War II.

You can also learn about the lives of the artists, or the history and unusual, sculpture-like design of the building. After the tour you’re free to spend longer looking around the museum armed with your new-found knowledge.

Situated between Manhattan’s Chelsea and West Village districts, it’s easy to combine a visit to the museum with a stroll along The Highline (a disused railway line that’s now an elevated park) or a browse of Chelsea Market (one of the city’s most revered food markets), which are both within walking distance.

Continue your travels with a trip to the Southwest 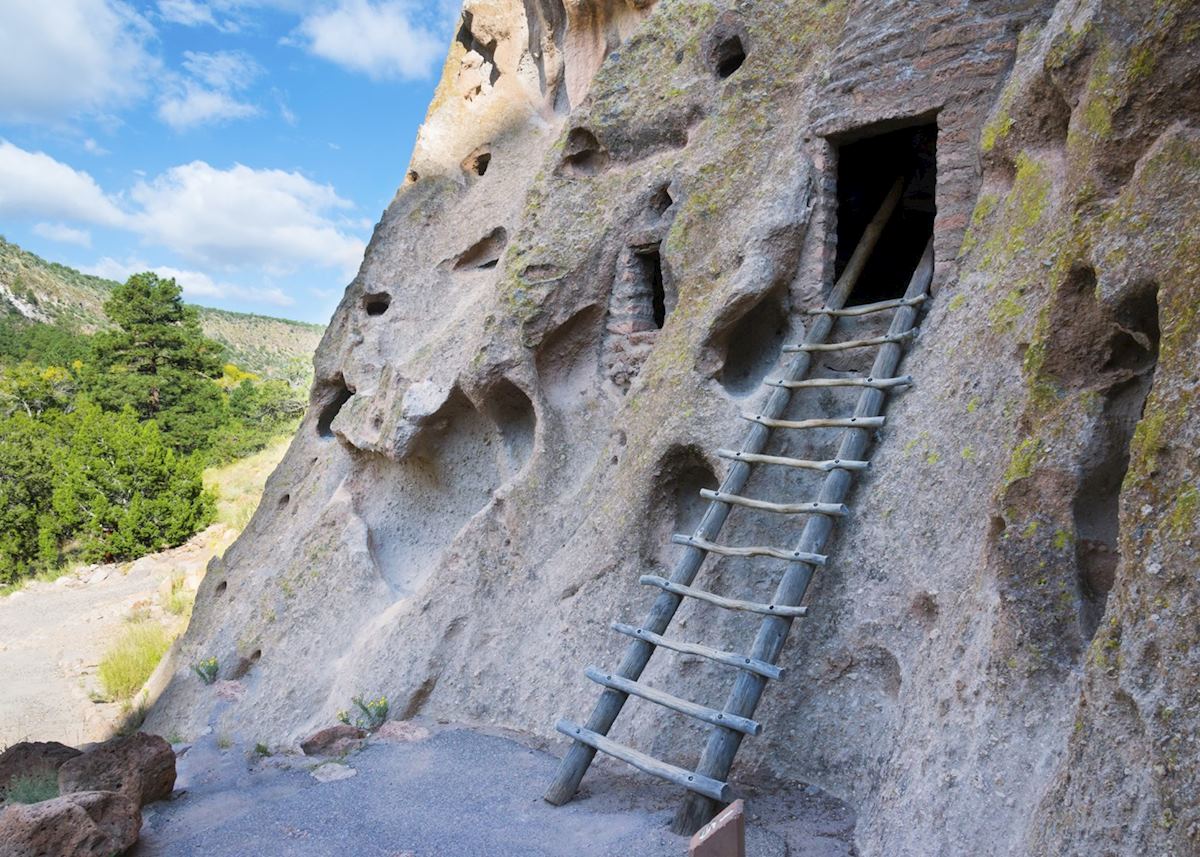 Take a five-hour flight from New York to Phoenix, Arizona, and you can explore art inspired by the Southwest’s mix of cultures and landscapes. I suggest driving two hours southeast to the city of Tucson. Here, at the Tucson Museum of Art, you can view pre-Columbian artwork dating from 1,600 BC onward, including textiles and ceramics skilfully produced by Aztec, Maya and Inca craftspeople.

Meanwhile, in Santa Fe, New Mexico, you can visit the Georgia O’Keeffe Museum. This art gallery celebrates the life and work of its namesake, who’s credited as the ‘mother of American modernism’. O’Keeffe moved from New York to New Mexico in the 1940s after many trips there.

Her popularity across the US saw her work exhibited in New York. In 1946, she was the first female artist to have a retrospective at MoMA, while the Whitney created the first catalogue of her work in the 1940s.

Many of O’Keeffe’s works were inspired by the landscapes and cultures of New Mexico, including the Pueblo Indians. In her Santa Fe museum, you can see some of her depictions of Puebloan cliff dwellings and multi-storey adobe homes, which still litter New Mexico’s sunk-baked landscape.

Near to Santa Fe, Bandelier National Monument preserves some of the Puebloan dwellings. I recommend joining a guided tour to learn more about the lives of Pueblo Indians — the first Native American people to revolt successfully against Spanish rule. You also get to climb up ladders to go inside some of the homes carved into the cliff face.

Trips ideas to the USA 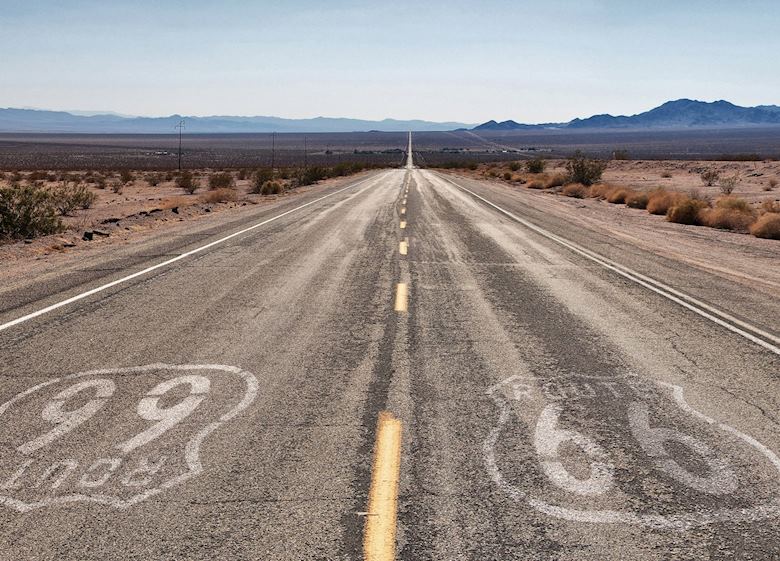 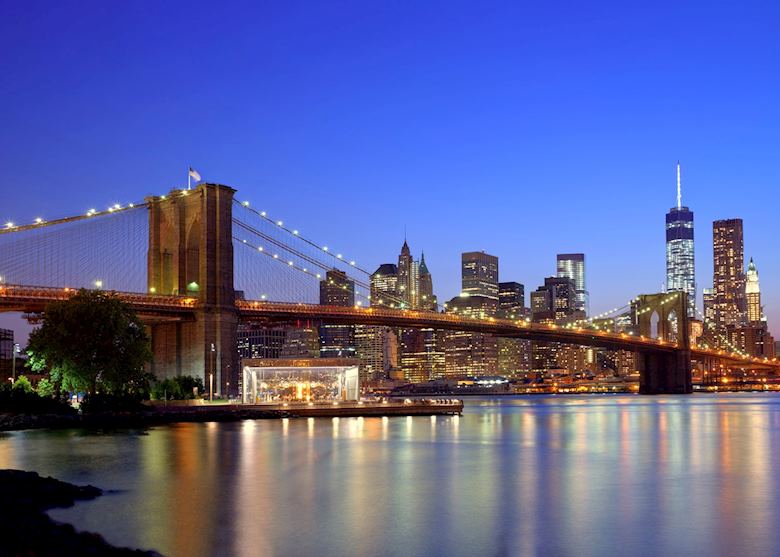 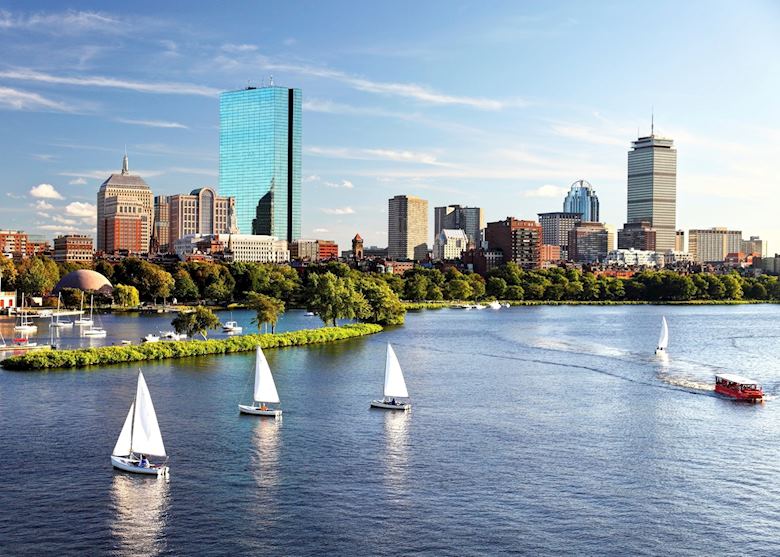 Cities of the East