When it comes to wildlife, you often think of Africa. If you’re looking for great winelands to visit, New Zealand springs to mind. Cloud-baiting architecture? Surely Hong Kong has that covered?

However, the USA can call upon places that can easily equal these locations for wonder and brilliance. Plus, they’re all contained in one country, meaning you could fit a healthy selection into one nationwide trip.

Yellowstone National Park boasts fine wildlife, from wolf to bison, while Chicago features plenty of glittering skyscrapers. Even if you’ve been to the USA once or twice before, there’s still plenty to see among its hidden corners, from the golden autumn leaves of Vermont and the volcanic vineyards of Oregon. Whatever type of trip you’re looking for, the USA has plenty to offer... 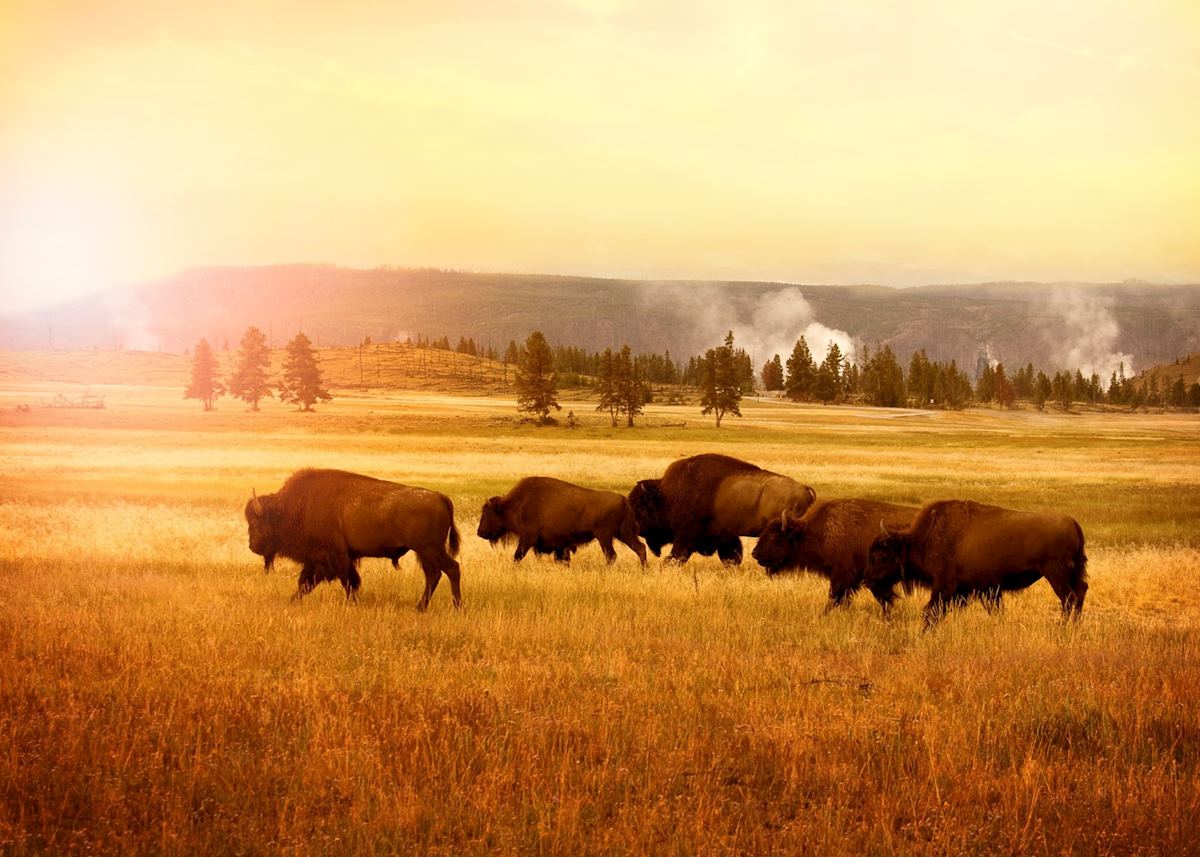 Many get their first taste of a wildlife-focused trip on an African safari, spotting animals such as lion, elephant and leopard. If you fell in love with the animals and their varied characters, why not visit Yellowstone National Park? Its cast of animals is just as charismatic, if a little harder to get close to.

The intelligence and bulk of a grizzly bear elevate it above most predators, and its mix of menace and beauty inspires both fear and affection. Bison are as impressive as they are quiet; they’re not the prettiest, but that doesn’t stop me from finding them charming. Wolves, like leopard in Africa, are the hardest to track; having a guide from Yellowstone Wolf Tracker is invaluable – they’re experienced, passionate, and know where to find them.

It’s worth the early start when you encounter a pack interacting at dawn. Wolves are easiest to spot in June or September – the days are cooler and the park is less crowded than at the height of summer.

What sets Yellowstone apart when tracking these animals is the park’s backdrop: witness wide-open plains edged by snow-capped mountains and geysers shooting plumes of steam into the air next to the rainbow- coloured Grand Prismatic Spring.

Learn about the wildlife and geothermal activity of Yellowstone National Park on an 11-day group tour incorporating the mountain town of Jackson Hole and Grand Teton National Park. 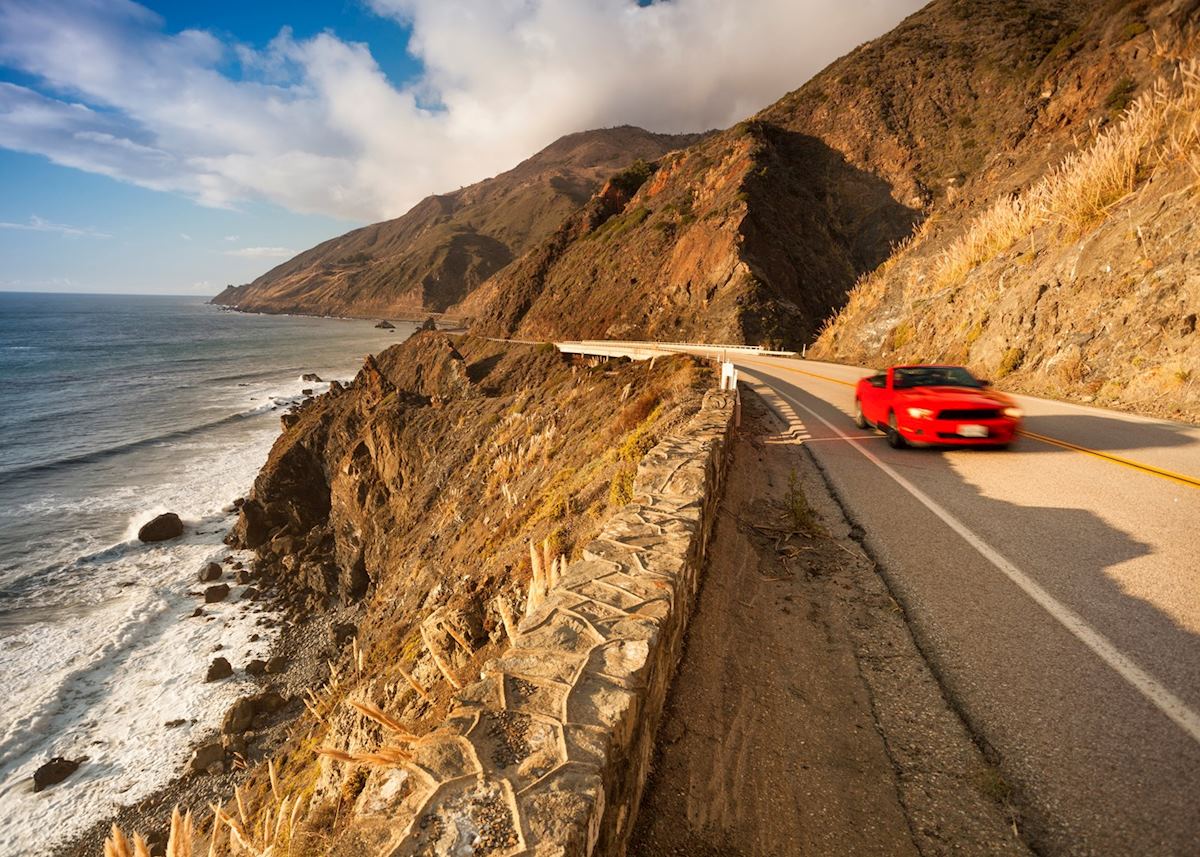 A great self-drive trip needs some essential ingredients: a good car, your favourite travelling companion, music to match the landscapes you’re passing and views that will most likely become the highlight of your journey.

The Pacific Coast Highway (Highway 1) runs from San Francisco to just south of Los Angeles, with the most celebrated section being Big Sur. Here, the road winds around the lower 48’s (the contiguous United States, not including Alaska and Hawaii) highest coastal mountains, which tumble down to the ocean – quite literally in 2017, when a landslide swept the road into the watery depths.

While repairs were being made to the classic route, we researched and planned an alternative route further inland. Now we’re excited to also be able to send people along Big Sur once more to drive the classic route of their daydreams.

Go whale watching in Monterey, drive along the Pacific Coast Highway with its dramatic views, tour Alcatraz, and relax on the soft sands of Pismo Beach, on an 11-day Coastal California self-drive trip. 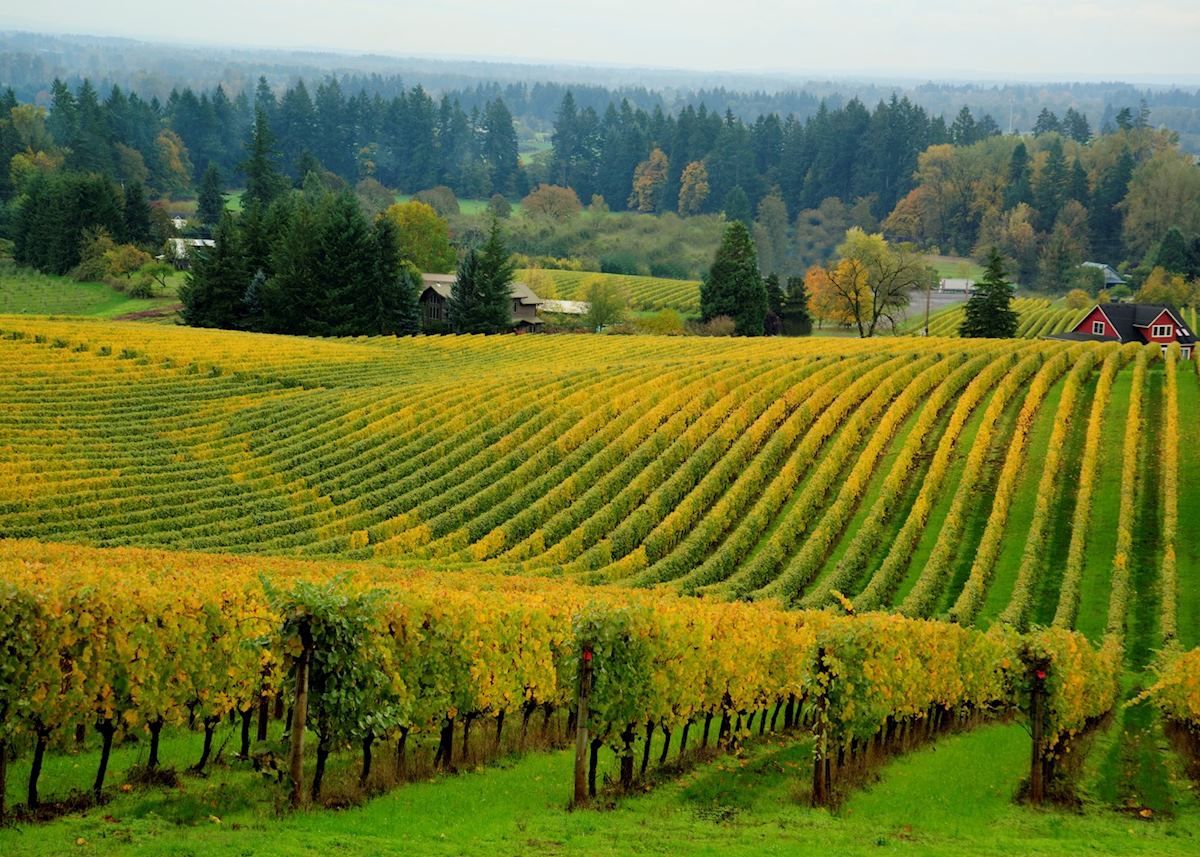 New Zealand, with its laid-back lifestyle, is often seen as a place where locals ‘know how to live’. But the USA has this sort of place, too – Oregon. The region’s Mediterranean-like climate is ideal for spending time outdoors, as well as for cultivating grapes.

This mix has enticed people from across the country to relocate here, where they can enjoy forests, beaches and snow-smeared volcanoes. The region’s big cities are hubs for fine dining, craft breweries and live music. But after a couple of days spent in the bright lights, I like to retreat to the countryside. It’s small-town America at its best.

Hood River, on the Oregon-Washington border, is a port town set on the wide, windswept Columbia River. Windsurfers and kite surfers glide across the water, overlooked by the enormous cones of Mount Hood and Mount Adams. Here, I like to join a local guide for a cycle ride around some of the vineyards.

The cool-climate Lynette chardonnay produced at Phelps Creek is particularly impressive, and sipping a glass among rows of green vines, backed by distant volcanic peaks, definitely improves the taste.

Visit Oregon on a 21-day self-drive taking in the cities of San Francisco and Seattle, the Californian coastline, giant redwood trees and Olympic National Park. 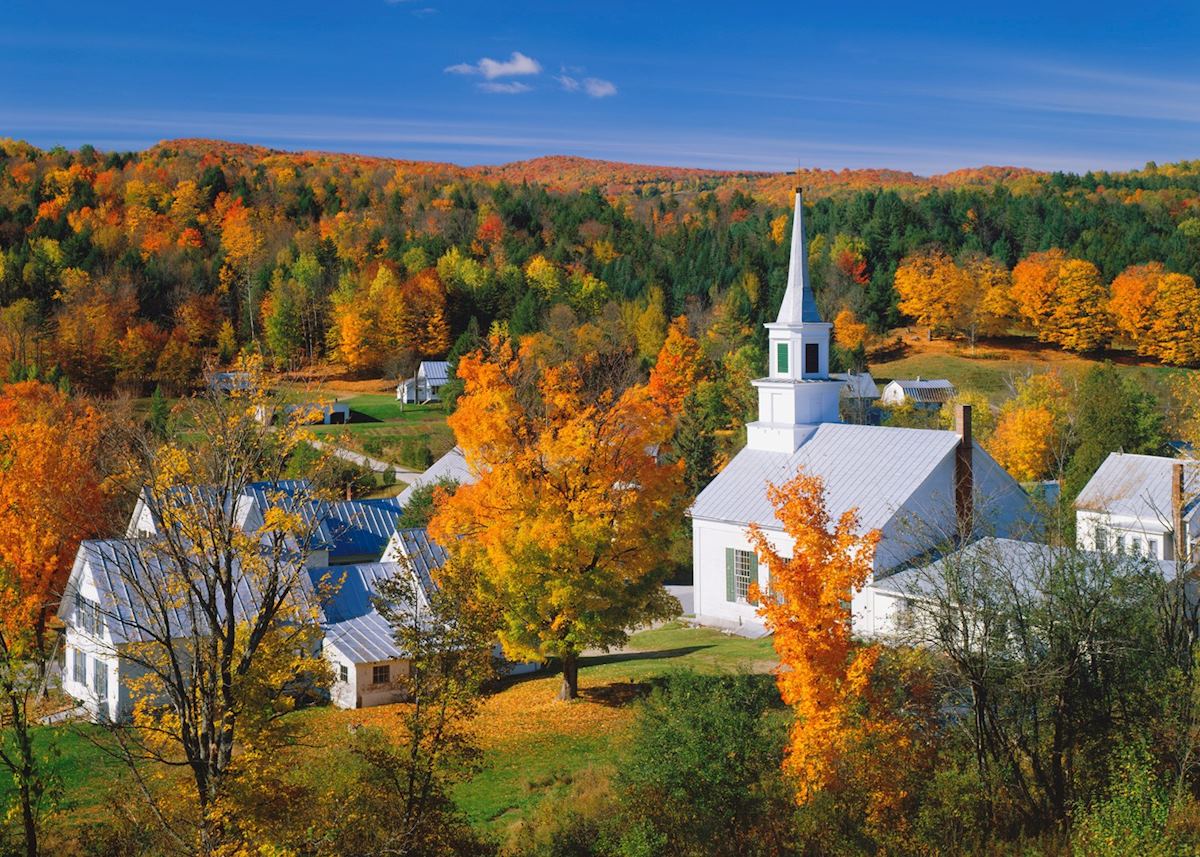 The arrival of the cherry blossom season in Japan signifies the end of winter and a new beginning. But you can also witness the last hurrah of New England’s trees during the fall before they brace themselves for a thick mantle of snow.

At this time of year, you’re often granted crisp blue-sky days, which contrast with the golds, reds, burnt oranges and yellows that dapple the landscape. Sunshine bounces off brilliant-white clapboard churches backed by forests ablaze with colour. The best displays occur during cool autumns that follow warm summers.

I love staying in Manchester, Vermont. The town is nestled among the trees of the Green Mountain National Forest. You can roam up and down the forest – on foot or by car – searching for the perfect stand of trees. Each evening, return to one of the town’s welcoming inns for some hearty food by a roaring fire.

Take a classic New England self-drive through the hills of Vermont, New Hampshire's magnificent White Mountains and the rugged coastline of Maine and Cape Cod. 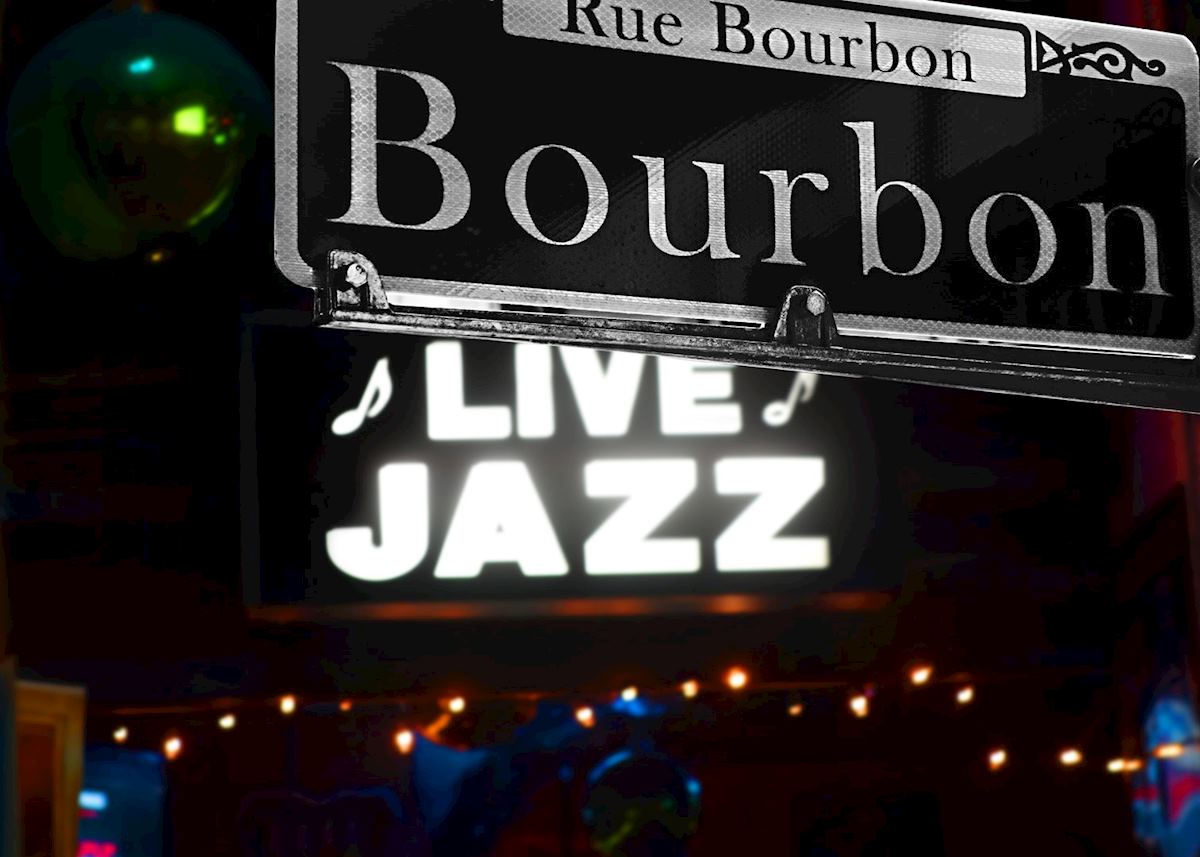 Whether it’s samba drumming in Salvador or salsa in  Cuba, a live music performance can enhance your understanding of the local culture. But on a trip to the Deep South, your entire time can be focused on live music, should you so wish.

Starting in Nashville, Tennessee – the USA’s country music capital – it’s all about cowboy boots, ten-gallon hats and the twang of steel guitars. Honky-tonk bars are full of revellers jigging to bluegrass and hillbilly boogie. Meanwhile, the Grand Ole Opry plays host to the big names; we can arrange a backstage tour during a performance.

Cross the state to Memphis, where the music switches to blues. On Beale Street, the bars and clubs, such as B.B. King’s, open early and close late. This is also the former home of Elvis, so a visit to Graceland and Sun Studio is almost obligatory. For an insight into Memphis’ contemporary scene, you can cruise around the city in a 1950s classic car with a local musician as your guide.

Down on the Mississippi Delta, much like New York, New Orleans is a city that never really sleeps. Bourbon Street’s jazz bars are easily accessible, but those on Frenchmen Street are perhaps more authentic.

You don’t have to stay up late to enjoy some great jazz; instead, I recommend a jazz brunch served in the courtyard of a French Quarter mansion. Not only will you hear excellent music, but you can also try traditional Louisiana dishes such as shrimp étouffée and catfish roulade.

Discover the Deep South on a 14-day tour exploring the streets of Nashville, the plantation mansions of Mississippi and the culinary history of New Orleans. 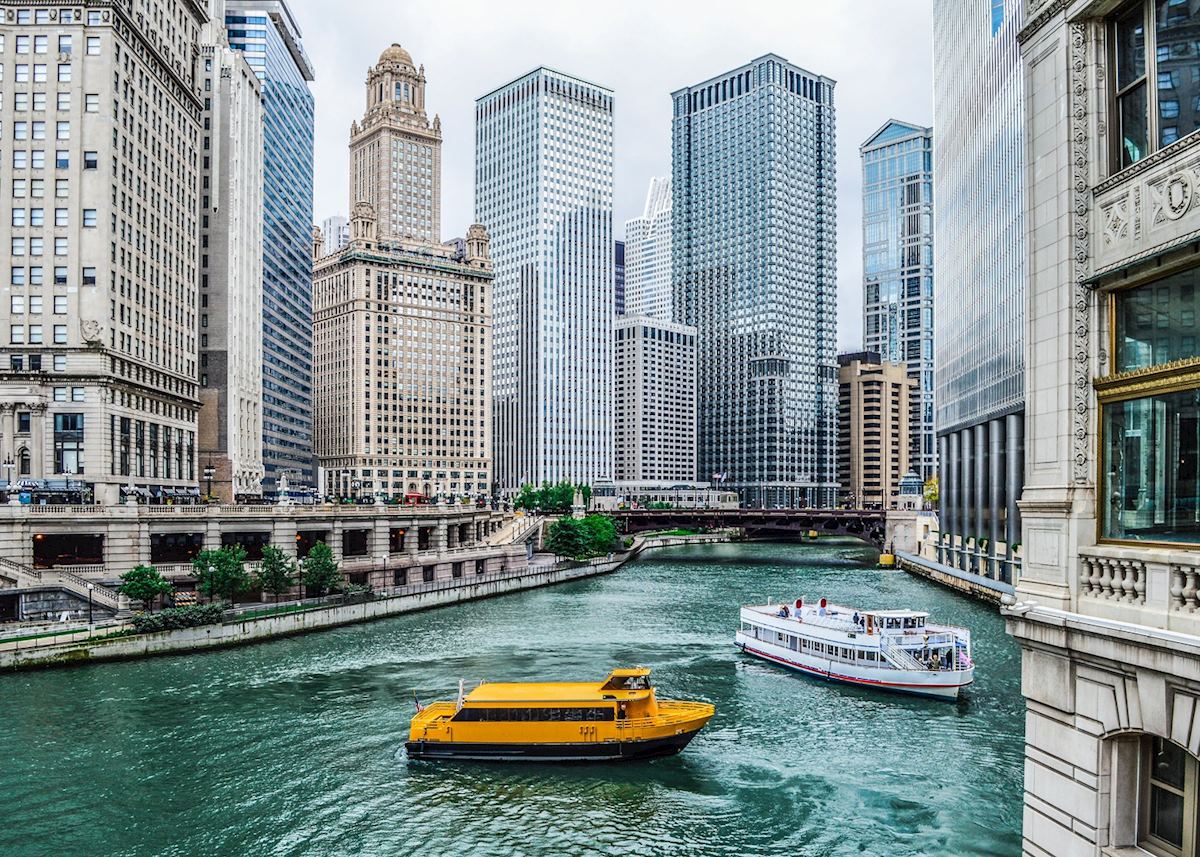 Hong Kong's mixture of walkable waterfronts, mountain peaks and futuristic architecture makes it a visually striking city. Likewise, the birthplace of the skyscraper – Chicago – is fêted for its looks thanks to its setting on Lake Michigan, as well as the array of architecturally significant buildings that line the Chicago River and Magnificent Mile.

I took a boat trip down the river for a different perspective of the skyline. The on-board guide – an architecture expert – helped bring the city’s history to life and put some of the buildings into context. As I floated through the canyons created by the towering structures, I spotted the 1920s Wrigley Building (of chewing gum fame) facing off against the Tribune Tower; both have huge amounts of character and were built before the fashion for steel and glass curtain walls took hold.

You can get another great view over the city from out on the lake. You can either take a boat trip, or you could stroll along Navy Pier, where you’ll also find fairground rides, entertainment venues and lots of places to eat and drink.

Enjoy the Chicago skyline from Lake Michigan, watch the sunset from Santa Monica and marvel at the Grand Canyon on a 15-day self-drive along Route 66.