7 travel experiences that take you back to childhood

We all remember stand-out moments from our childhood, whether it was coming face-to-face with wildlife we’d never seen before, the thrill of riding a train for the first time or that feeling of adrenaline and adventure when discovering something new.

You can relive those memories when on your travels. Below, our specialists share places and experiences that take you back to your formative years, from horse riding on a ranch like a cowboy to camping in untrammelled wilderness on a Tanzanian safari and zip-lining through Costa Rica’s cloud forests.

Horse riding at a traditional ranch in Wyoming, USA 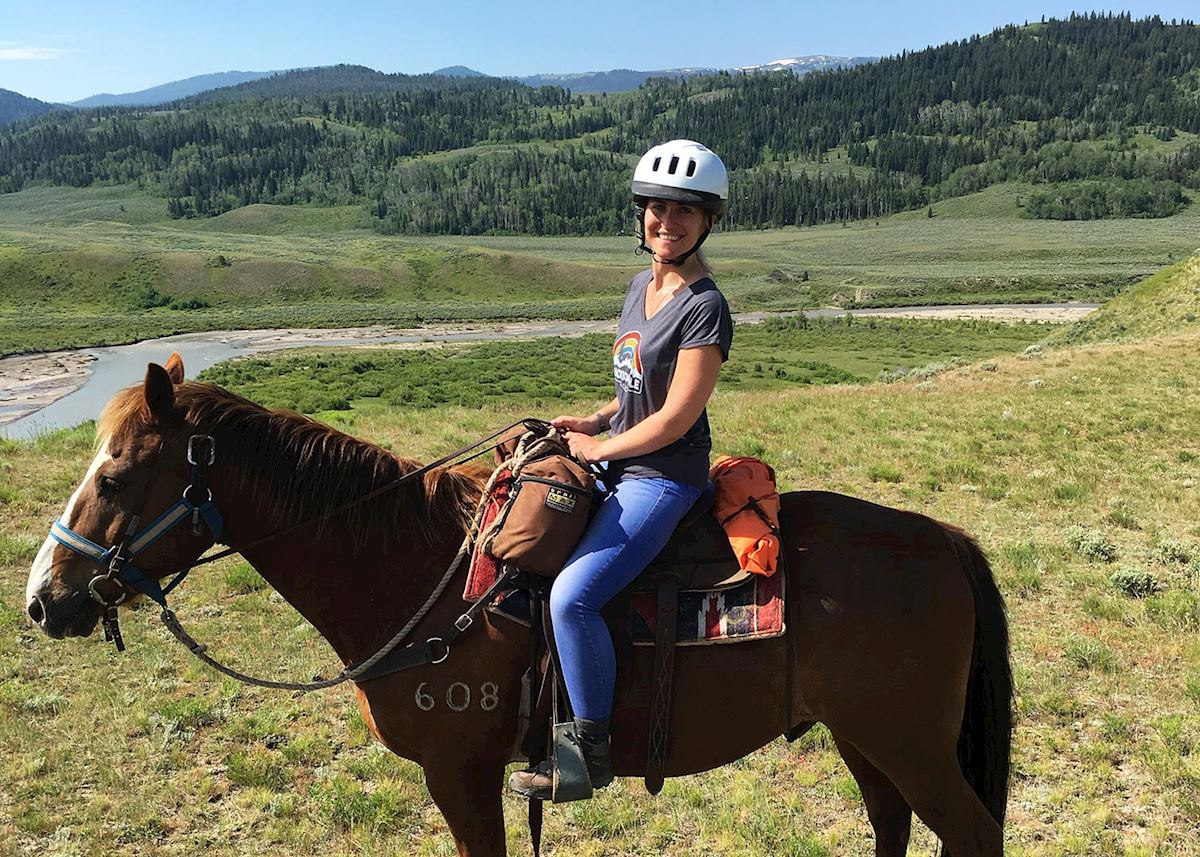 After driving for an hour through the Wyoming countryside, I finally reached Goosewing Ranch. It was everything I’d imagined a ranch to be. Set in the green folds of a remote valley and backed by the crumpled outline of the Teton Range, the property has log cabins, an even more secluded ‘glamping’ site (where I recommend spending at least a night of your stay) and stables for more than 60 horses.

Tom, a 70-year-old wrangler, seemed to know each of the horses like old friends. He told me he’d been a wrangler his whole life. Embarking on my first ever horse ride didn’t seem so daunting with him leading the way.

After requesting a helmet (cowboy hats are tempting, but safety comes first) a small group of us rode in a line through the property’s wilderness. My horse, Gus, had been matched with me based on my ability and his temperament.

He was so well trained that I barely needed to steer. Instead, I took in my surroundings as we rode at a leisurely pace up a hillside. The valley spread below us and all I could hear was the rustle of grass in the wind and the horses’ gentle breathing.

As you gain more experience, you can go on all-day rides through the countryside, taking a packed lunch with you. And, you can try your hand at cattle driving, using your horse to coax the ranch’s cattle into designated pens like a true cowboy (or girl).

Days end trading tales around a crackling camp fire, just as they have here for centuries.

If you’re not done with the cowboy lifestyle, spend time in the Wild-West town of Jackson Hole before discovering the wildlife and geothermal landmarks of Yellowstone National Park.

The ancient city of Petra, Jordan 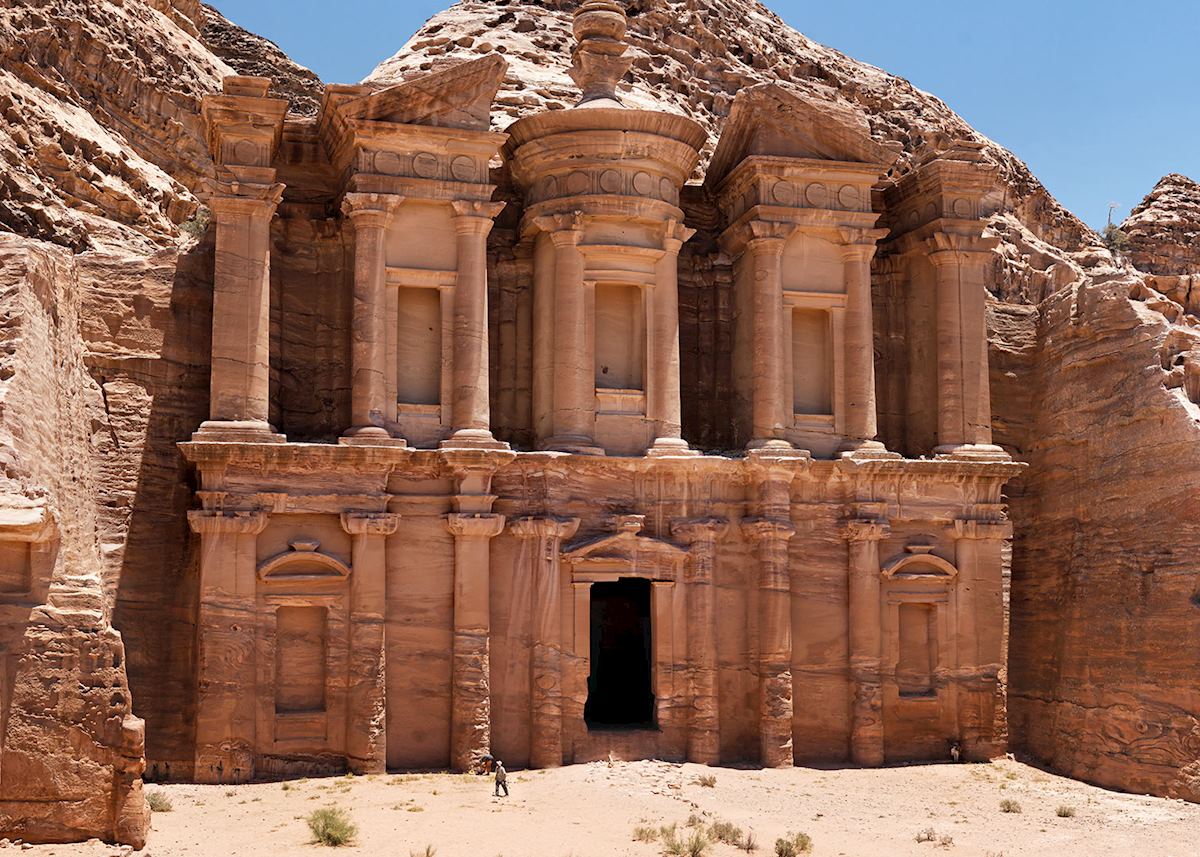 A mysterious city hidden deep in the desert. The haunting ruins of an ancient empire. The gritty crunch of sand and stone beneath your boots as you explore the vast, echoing wadi and imagine the people who once lived here….

A visit to Petra is arguably the closest you can get to living out the action-adventure pulp novels of the 1930s or their latter-day cinematic incarnations. In fact, this capital of the ancient Nabatean kingdom was featured in Indiana Jones and the Last Crusade.

However, the city’s popularity means the crowds can impinge on any illusions of being an intrepid explorer. That’s why I always suggest you visit Petra for at least two days. On your first, you can take the usual route through the city, entering through the long, narrow Siq in the morning and revelling in the sudden appearance of the Treasury, the city’s most-photographed building.

But, on your second day, I suggest you take the back route from Little Petra. Also known as Siq al-Barid, Little Petra is a smaller suburb of its namesake located north of the main site. You can leave from here for a hike through rugged mountains to reach the Monastery.

Sitting high on a plateau, the Monastery resembles the Treasury, but it’s much larger, soaring to a jaw-dropping 45 m (150 ft). It’s towards the end of the wadi, at the top of a fairly steep set of 800 steps, so most visitors don’t reach it until the late afternoon. Taking this back way in, not only will you avoid the stairs, you’ll be there early in the morning and have the site largely to yourself. 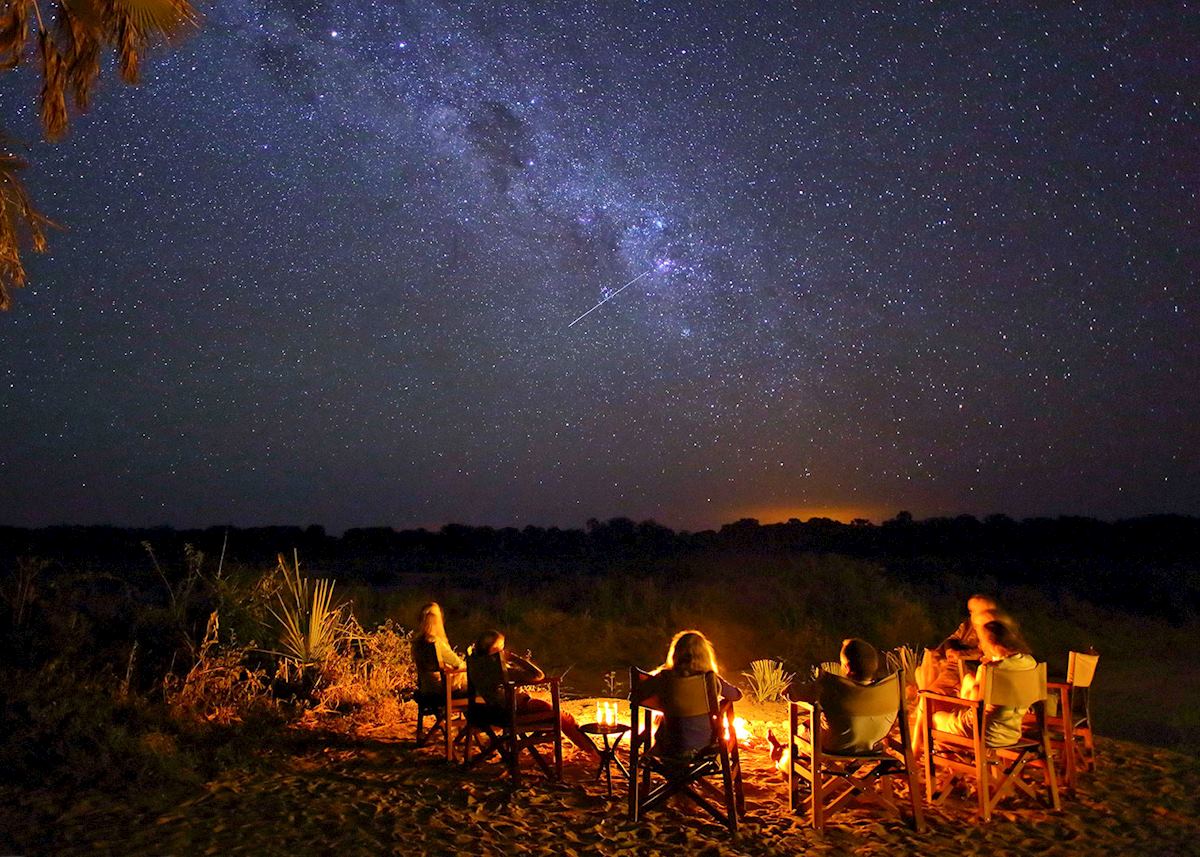 By Shannon from our Africa safari team

As we walked through the bush, Moli, my guide, held up his hand for quiet. We’d arrived at a herd of elephant, about 15 of them, ranging from huge adults to calves sheltering beneath their bellies.

They hadn’t seen us — Moli explained that elephant have very poor eyesight, so rely mostly on smell and sound. He’d used a sand-filled sock to determine the wind direction and positioned us so that we remained undetected, but close enough to feel the ground tremor with their movements.

Eventually, one of the adults noticed us and the herd trudged off, innately wary of humans (and rightly so). You never usually get so close to elephant on foot, but Moli’s many years of bush-walk experience ensured we were in safe hands.

Not only one of the best guides in Tanzania, Moli — along with his parner, Noelle — runs Kichaka Frontier Camp. With just three tents, it’s set in a remote area of Ruaha National Park (so remote, in fact, that it’s a four-hour game drive from the nearest airstrip, though you can easily tag it onto a wider Tanzania safari and beach stay).

As well as staying at Kichaka’s permanent frontier camp, you can embark on a more rustic multi-day fly-camping experience. By day, you walk, pausing to learn from Moli or one of the other guides about animal tracks, plant life, trees and even human evolution.

Your camp is set up in the middle of the bush — simple dome tents, often beside a riverbed where animals come to drink. Then, after a hearty meal cooked over the fire, it’s just you and the Milky Way. 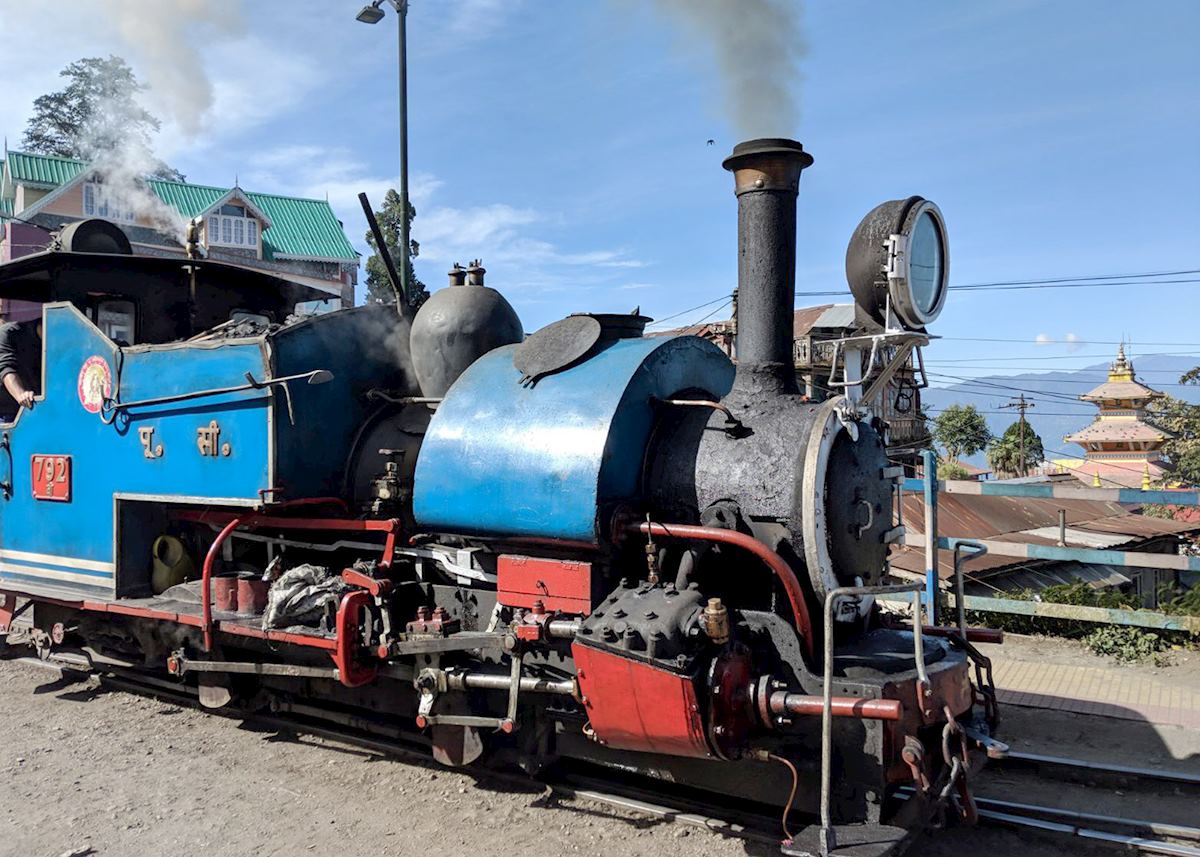 Pressing my nose against the window, I watch a thick column of steam pass by as the carriage slowly clatters out of the station. The pace doesn’t quicken, this is a journey purely for enjoyment.

So much so that half-way along the journey, from the former British-colonial hill station of Darjeeling to the nearby town of Ghoom, the train grinds to a halt. We’re not at a station — this is simply a platform built so that everyone can disembark and admire the train, the foothills of the Himalaya rising in the background.

The driver steps out of the cabin of this B-class steam locomotive, standing proudly to attention alongside it. Everyone clamours around, admiring the polished smokebox and chimney, while the driver encourages adults and children alike to stand beside him to pose for photos.

Back on board, the train slowly continues the 40-minute journey to Ghoom as residents and shop owners quickly cover washing and move tables of produce to let the train pass.

This route is part of India’s first mountain railway, a UNESCO World Heritage narrow-gauge track that, due to its small size, became affectionately known as a ‘toy train.’ It no longer runs its original 96-km (60-mile) route in its entirety, but this leisure trip runs daily, often cheered on by its own dedicated society of railway enthusiasts.

From Ghoom, you could ride the train straight back to Darjeeling or stop and explore the town’s tiny but artfully decorated monastery. Onward travel could take you further into West Bengal and Sikkim, and to the former capital of India, Calcutta. 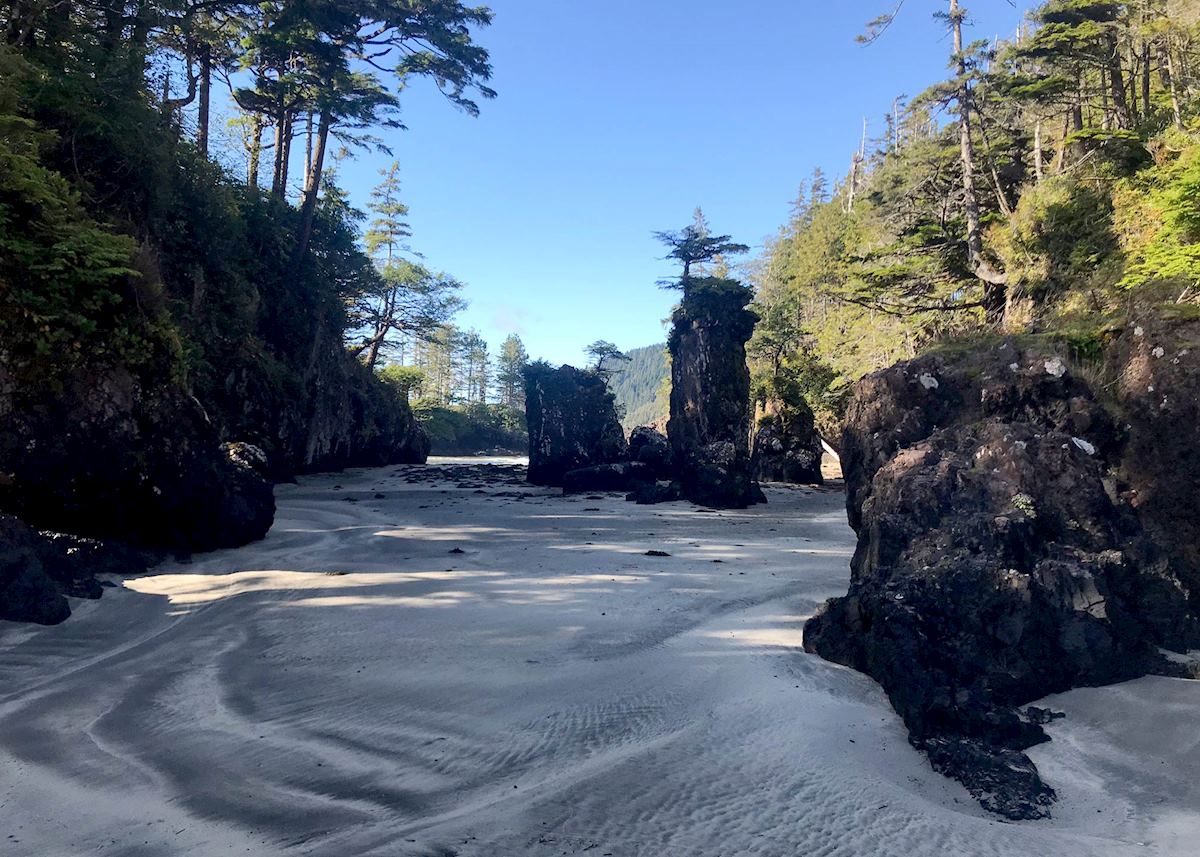 I joined a small-group trip to this secluded part of the coast from Port Hardy, led by a local guide. You begin with an hour-and-a-half’s drive by minibus along an active logging track inaccessible to cars (your guide radios the truck drivers to ensure you can pass safely). Look out for black bears, black-tail deer and eagles along the way.

Then, you take a gentle hour-long walk through old-growth forest. I felt tiny compared to the trees surrounding me, which seemed to blanket us from all sounds except bird calls and the occasional snap of a twig. My guide, Chris, pointed out the forest’s natural features, from plants and mushrooms to insects, birds and animal tracks, as well as filling us in on the area’s history.

The forest eventually opens out onto a huge beach that wouldn’t look amiss in the south of France. The sand stretched out before me, completely empty and backed by forest. After a picnic of locally made sandwiches and cakes, you’re free to wander. I came across wolf tracks leading into a cave and saw a sea otter twirling in the waves.

Shallow rock pools collect a treasure trove of crabs, star fish, limpets and whelks. And, if your feet don’t mind the cold, you can paddle in the waves as they roll ashore.

After returning to Port Hardy, you can continue your trip with a stay at a bear-viewing lodge on British Columbia’s coast. 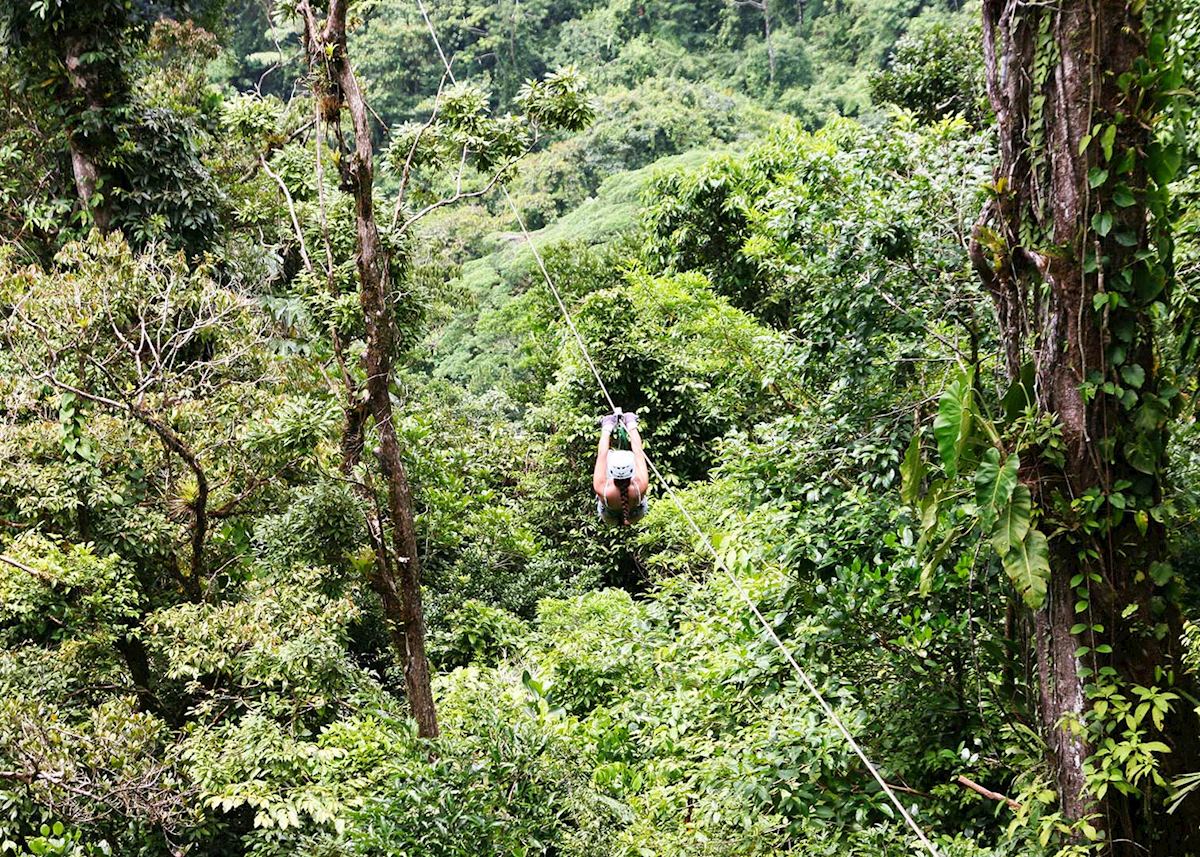 There’s something to be said about wandering beneath the boughs of Costa Rica’s cloud forests. But, I’d argue that it’s even more exciting to peer down at the treetops as you whiz through the higher canopies with views right across the tree line.

If you’re the intrepid type, zip-lining is a must, but even if you’re not, I encourage you to consider it. It’s not as extreme as it sounds and it’s a good option if you’re undertaking a family adventure across Costa Rica. I haven’t met anyone who regretted trying it.

There are a number of destinations to choose from, including Monteverde in central Costa Rica. Here, in Selvatura Park, you’ll traverse the cloud forest along 13 cables, gaining a vantage point once reserved for those who first climbed these trees. There’s the option to ride tandem alongside a family member, and children from the age of four are welcome.

Once you’ve finished zooming through the trees, you can take your time along a series of treetop walkways and suspension bridges. This gives you the chance to look out for some of the region’s birdlife, from iridescent hummingbirds to magenta-throated woodstars. 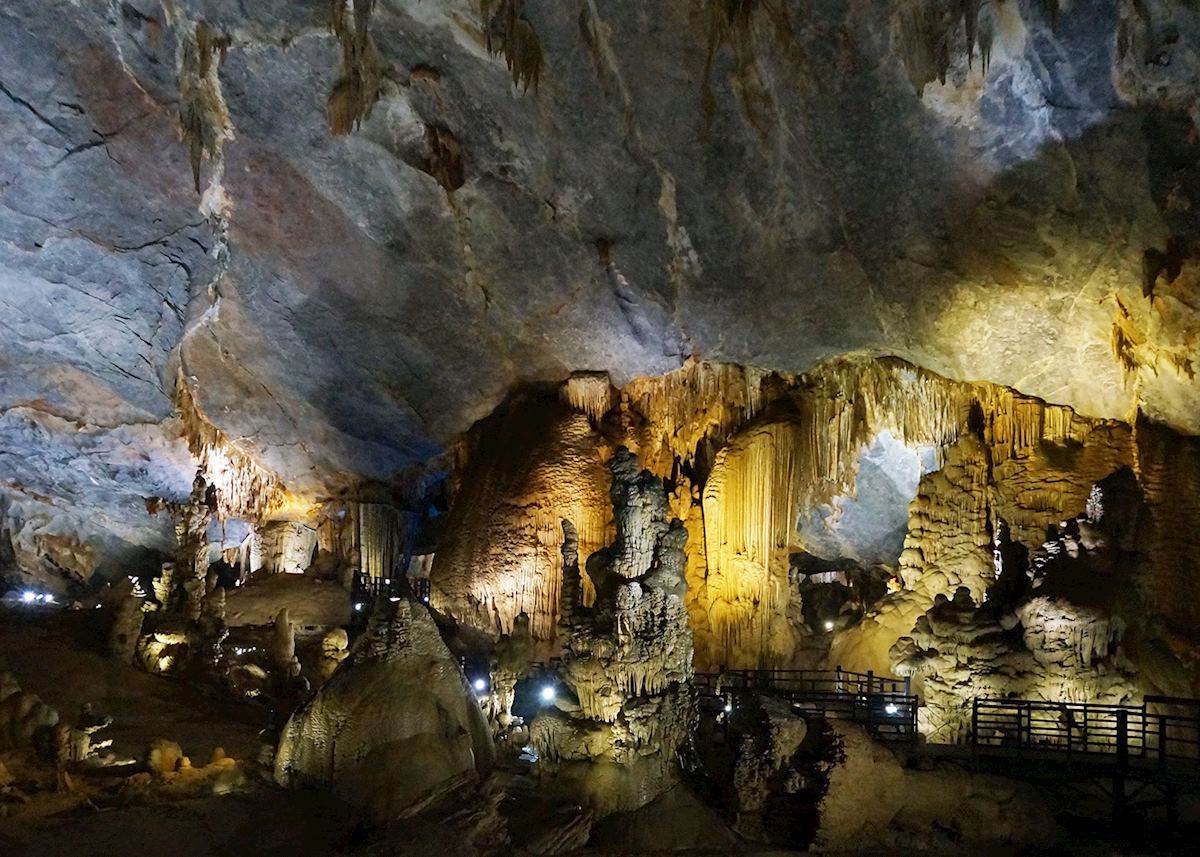 After a day’s hike wading knee-deep in rivers and over thick jungle roots, my small group and I donned our hard hats and entered a low, wide cavemouth. From here we clambered, single file, up a pile of boulders.

Few views have actually made me gasp out loud, but this is one of them. From our vantage point we were looking down into Hang En Cave, one of the largest in the world.

A shaft of light from an arch high above flooded the cavern below, highlighting a turquoise subterranean river and a sandy beach, dotted with a neat row of small, vibrant domes. These were our tented homes for the night.

Hang En is just one of a series of caves in Phong Nha-Ke Bang National Park in central Vietnam. Some, like Hang En and Son Doong (the largest discovered, capable of swallowing a New York city block) are multi-day treks for the intrepid. Spaces are limited, so you’ll need to book well in advance.

If you’d like something more accessible, there’s also a series of caves close to Phong Nha village which you can drive or cycle to. Paradise Cave lives up to its name and is the most impressive, its stalagmites, stalactites and helictites lit like a subterranean cathedral.

If you’re inspired to look into the adventurous side of Vietnam, you could combine this with mountain villages and waterfall treks on a two-week trip across Vietnam.

Explore the mysteries of Petra Tanzania safaris: north vs south India’s toy trains: Shimla, Darjeeling and Ooty What to do in Costa Rica: our highlights guide Where to go in the USA
Get in touch