Travel the world from home

As we make the most of being at home, our thoughts still can’t help wandering to different corners of the world. Using the lens of TV and film, language, literature, food and drink, and music, we’ve explored ways to keep your travel inspiration alive from the comfort of your own home.

You could explore the brushstrokes of Michelangelo’s Doni Tondo on a virtual tour of Florence’s Uffizi gallery or read books that conjure vivid images of Fez and Chile. Spend an evening in the kitchen rustling up a fragrant Mauritian curry or settle down to watch a movie that showcases New Zealand’s ‘majestical’ landscapes.

Suggested by Sarah from our marketing team

I could talk about Mauritian food for hours: the island is the size of Greater London with a heady mix of cultures and cuisines to match. There are crusty French rolls and locally grown coffee for breakfast. Lunch could be fish curry served with a homemade selection of pickles — taught by a pair of Mauritian grandmothers in their own kitchen. Dinner might be an a-la-carte menu of exquisite tea-infused dishes.

For a taste of the island in your own kitchen, Maariyah, a young Mauritian with a passion for food, runs her own YouTube channel, Cuisine Mauritian. In clear videos, she runs through typical Mauritian snacks, recipes from her childhood and the occasional international dish with a local twist. I can recommend her family banana curry recipe, it’s a quick, simple dish that made me consider bananas in a new light.

Suggested by our marketing team

The popular language-learning app Duolingo has seen a massive spike since the lockdown, proving we're not the only ones using the downtime to kickstart our language skills. Duolingo builds spoken, written and listening skills, starting with the most basic words and phrases.

You make progress through completing a series of exercises that build on what you’ve already learned — each one only demands about 15 minutes of your time. You can also follow, and measure yourself, against fellow learners.

The app is already available in more than 30 languages, from Arabic to Ukrainian. Several languages are still in beta testing, including Hungarian and Klingon, if your time at home has included bingeing on Star Trek.

I first met Suzanna Clark when I was living and studying in Fez. Her husband, a white-haired bon vivant named Sandy, ran Tahmis, a restaurant that was popular with the expat community. They were both from Australia and had fallen in love with the city’s dilapidated beauty and camel-trodden streets.

Her book, A House in Fez, is foremost a memoir of her year spent buying and renovating a 300-year-old traditional riad. Her prose vividly describes both the house and the people she befriended, including 18 skilled artisans who helped to recreate or repair the cedar-wood doors, the intricate tile mosaics and the central fountain.

But between anecdotes (and occasional grousing about Byzantine red tape), she immerses the reader into the culture and history of Morocco in general, and Fez in particular. I pick this up whenever I want a reminder of the city where I once lived.

Journey around the world through music

By Nicola from our marketing team

For me, nothing conjures a certain place or country more than its music, whether it’s the smooth, seductive sounds of Argentina’s tango or the soul-lifting vocals and percussion of sub-Saharan Africa.

BBC Radio 3’s Music Planet: Road Trip podcast allows you to transport yourself to different parts of the globe through harmony and song. From South India to Panama, Uganda to Spain, each episode focuses on the musical culture of a different country or region as the host takes a road trip, sampling its varied music styles as they go.

Episodes are no longer than 15 minutes, so you can dip in and out depending on where you want to (musically) travel. I recently listened to an episode focused on the sounds of Kenya, which took me back to my time on safari there. Hearing the upbeat sounds of the nyatiti (an eight-stringed harp) and benga (a traditional guitar) reminded me of the people I met, and of the joy and excitement I felt as I searched for wildlife on the Masai Mara’s plains.

Experience Touches of Tokyo in Lost in Translation

This may be a predictable choice, but Lost in Translation is popular with those who long to revisit Japan, or want to visit one day — for a very good reason. It’s not so much the storyline that evokes nostalgia for me, but the depiction of sounds and sights — the ‘ping pong’ of doors opening, the woman’s softly voiced subway announcements and the beeping of the crosswalk signal.

The interactions between the Japanese and the western protagonists are relatable too, whether you’ve lived in Japan like I have, or are paying a visit. In the movie, Bill Murray looks out of a taxi window on arrival, in awe of Tokyo’s neon nightscape, and the bustle of the city surrounding him. It reminds me of my first impressions in that initial ride from the airport, when you’re looking out the window trying to take in your surroundings, thinking about the adventures to come.

I find myself drawn in whenever I take the time to watch online wildlife footage filmed by hidden cameras. They’re a chance to see how animals behave in their natural habitat, completely oblivious to human eyes.

To remind myself of my polar-bear watching trip to Churchill, Manitoba, I often tune into the footage of this polar bear cam, filmed around Churchill’s Hudson Bay. Watching it brings back memories of my time there, when I was lucky enough to get up close to polar bears on tundra vehicle tours.

On one occasion, we had a polar bear come right up to our giant, six-wheel vehicle. After sniffing cautiously, he hoisted himself up onto his hind legs to peer through the windows, his breath clouding the glass.

While the footage isn’t live at this time of year, you can watch the highlights of the winter season for a taste of what it’s like to be out in the Canadian tundra alongside these gentle-yet-fearsome creatures.

Watch Hunt for the Wilderpeople

When I first visited New Zealand for the first time in 2014, what really struck me was how remote the countryside was. Even on the more well-trodden routes, such as those in Milford Sound, I didn’t see a single soul.

These remote landscapes are celebrated in Waititi’s 2016 movie, Hunt for the Wilderpeople. The story follows Ricky Baker and his bad-tempered foster father, Uncle Hec, who are on the run in the New Zealand bush.

Uncle Hec says ‘pretty majestical, eh?’, as he and Ricky are sat overlooking a lake at sunset. Hec then goes further to say that the word ‘majestic’ isn’t special enough to describe the view — something I think is true of all New Zealand’s vistas.

The director includes several sweeping helicopter shots over some of these ‘majestical’ landscapes, showcasing forest-carpeted mountains, snow-capped peaks and serene-blue lakes. For me, the movie captures the country’s natural beauty as well as a sense of adventure.

Suggested by Kimberly from our Italy team

Many will disagree with me, but I think the Uffizi is perhaps the best museum in Europe.

I first visited Florence when I was studying art in Italy. I’d seen many of these pieces reproduced as posters, prints, even refrigerator magnets: Botticelli’s Birth of Venus, Michelangelo’s Doni Tondo, Caravaggio's Medusa and Raphael's Madonna of the Goldfinch. But viewing them in person was a revelation. For the first time, I could comprehend both the massive scale and the minute details — individual brushstrokes, finely crackled glaze and the translucence of the pigments.

While it’s not quite the same thing as a visit, Google’s Arts and Culture project offers a virtual tour of the gallery that you can take from your own living room (with a glass of Chianti, perhaps). The resolution is fine enough to zoom in and see the brushstrokes that first floored me as a student. 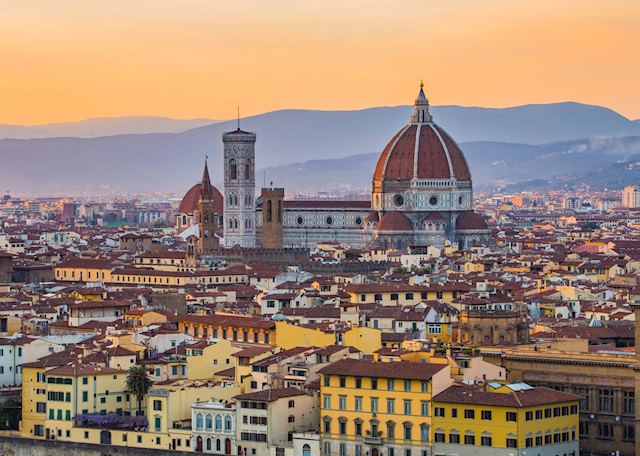