View Guana Island from the sea, and it’s possible to make out its namesake, the iguana-shaped rock on the northwest of the island. The eighth largest island in the British Virgin Islands, it’s a rocky 3.4 sq km (1.3 sq miles) covered in lush rainforest. Its largest beach, White Bay, is half a mile of silver-white sand, with a few swaying hammocks, a well-stocked beachside honesty bar and a small marina. 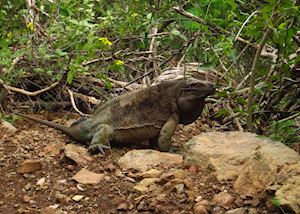 The island’s other six beaches are completely untouched and only accessible by boat or by hiking one of the numerous trails. The well-mapped 19 km (12 miles) of walking trails are a great way to explore the ecological diversity of the island. Stout iguanas and ground lizards roam freely, and the rare quail dove is commonly spotted. Turk’s cap cacti, frangipani trees and bougainvillea are vibrant additions to the landscape. Flamingos, once hunted to extinction on the island, have been re-introduced. For a more challenging hike, climb the peak of Sugarloaf Mountain for views across the coastline.

The calm Caribbean Sea lies to the south of the island, where healthy reefs hug the coastline. The gentle currents make this an ideal environment for snorkeling from the beach or a boat; Monkey Point’s shallow pools are particularly recommended. The reefs make up a protected marine park and are home to an extensive list of marine life including pufferfish, turtles, stingrays and barracudas. The rougher Atlantic Ocean to the north of the island claims some dramatic dive sites, including shipwrecks and steep walls of coral.

It’s still possible to spot signs of Guana’s former Quaker colony in sites such as the ruins of a lake house and sugar mill. The small on-site museum documents the history of the island and its past residents including the Bigelow family from Boston, who bought the island in the 1930s to host friends, and the current owners, the Jareckis.

We’ve selected a range of accommodation options for when you visit Guana Island. Our choices usually come recommended for their character, facilities and service or location. Our specialists always aim to suggest properties that match your preferences.

Start planning your tailor-made holiday by contacting ​one of our British Virgin Islands specialists...