Our top 7 experiences in Cambodia

The top of most visitors’ lists of things to do in Cambodia is a visit to Angkor Wat. While I agree it warrants a prime position, there’s more to the country than being the home of the former capital of the Khmer Empire. There’s its forward-thinking capital, sleepy coastlines and great swathes of jungle-covered wilderness.

I’ve picked out my top experiences, which could all be combined to create the ultimate trip across Cambodia.

From the rooftop cocktail lounge of the Rosewood Phnom Penh you can see Cambodia’s relatively flat capital spread out before you, the Mekong River curving away to the east.

This is the ideal vantage point to start a guided evening food (and drink) tour of the city, the lights of the French-colonial architecture, gilded Buddhist temples and narrow alleyways twinkling below. After a sunset cocktail, you can descend to the streets below with a local resident.

Your guide will lead you to micro-breweries serving up European-style IPA beers and snack bars serving a variety of nibbles — look out for the Kampot pepper pâté. Try a signature cocktail in a hidden speakeasy and sample a traditional bar snack: fried, crunchy crickets.

2. Angkor Wat and the temples of Angkor

Yes, this is an obvious choice, but for good reason. The largest religious building still in use in the world, Angkor Wat is hard to beat.

Building started around the 9th century and marked Angkor as the capital of the Khmer Empire. Walk the jungle-shaded paths and you can still get a feel for the empire at full might. The Angkor Wat is just one of hundreds of temples that make up the temples of Angkor, and it’s best to take time to visit a selection.

Bayon Temple is the most richly decorated, with over 11,000 statues and 216 faces carved into the stone. After much study, historians are convinced each face was created as a likeness of the rather vain King Jayavarman VII. As most people head to Angkor Wat for a sunrise viewing, I’d head here instead.

Angkor’s temples spread across a vast distance around Siem Reap, a town that’s grown up near the ruins, originally to house visiting Khmer pilgrims. The closest temples are always the busiest, so its worth visiting some of the far-flung sanctuaries.

Some can be hard to find, and still smothered in jungle, so I recommend a guided tour. About 40 km (24 miles) from Siem Reap, surrounded by a lily-pad-topped moat, is Banteay Srei.

It’s dwarfed by some of the more well-known temples, but this smaller edifice is almost completely covered in some of the most intricate carvings in Angkor, including scenes from the epic Hindu tale Ramayana. It’s also made from an unusual red sandstone, which flushes pink at sunrise.

Most people tend to skip past Cambodia’s second city, but therein lies its charm. With few visitors, little traffic and barely a hill, you can cycle past its French-colonial villas and temple ruins with ease.

Unlike Phnom Penh’s growing skyline, Battambang’s development has been decidedly low key. You’ll ride past streets of craft boutiques, arty hotels and the sort of alfresco cafe where you could easily while away an afternoon sipping local coffee and Khmer specialities.

Once you’ve had your fill of the city’s quiet side streets and decapitated architecture, direct your bike towards the surrounding countryside, where you’ll find a landscape of paddy fields and tiny villages.

5. Elephant conservation in the hills

‘Let them roam free’ is the mantra of the Elephant Livelihood Initiative Environment, or ELIE as it’s fondly known to its staff. In a secluded part of the Saen Monurom hills, you can spend time with its free-roaming elephants, who have been rescued from lives of work or abuse.

The focus here is very much on the elephants’ welfare, so there’s no elephant riding — instead you can walk alongside them in their natural environment and help the mahouts at feeding time. As you hike through the jungle to visit the herds, you might spot other wildlife, including gibbons or eagles.

It’s a lengthy six-hour drive from Phnom Penh, but you can stay overnight. If you’ve got any energy left, I suggest climbing up to the viewpoint above Sen Monorom town for sunset views across the jungle.

6. Sleep in a floating bungalow in the Cardamom Mountains

Stay at 4 Rivers Floating Lodge, and you’ll wake to the sound of gibbon calls and birdsong. Then, open the floor-to-ceiling curtains for an uninterrupted view across the Tatai River, the jungle-robed Cardamom Mountains rising above.

The lodge has 12 luxury tents built on floating pontoons, but this is by no means camping. The interior of the tents wouldn’t look out of place in a hotel, each with a private terrace where you can moor your kayak or jump off for a swim.

Although it’s a four-hour drive, then a 30-minuite boat ride, from Phnom Penh, it’s worth it for the surrounding wilderness, which lends itself to rainforest hikes, waterfall swims and sunset boat rides.

7. Relax on the Cambodian coast

To finish a trip across Cambodia, I always suggest time to relax, and the laid-back towns along the country’s coast are ideal. Kep was once a sanctuary for French-colonial rulers, who have left a legacy of faded villas that line the main street.

From beachside statues to restaurant menus, you’ll see the town’s main industry everywhere: crabs. Take an early morning visit to the crab market and, if you see something you like, your hotel’s chef can cook it up for your lunch.

After time relaxing by the coast, I suggest spending a day visiting the nearby town of Kampot, the namesake of Kampot pepper — often lauded as the best in the world. Guided tours of pepper plantations can be combined with cooking lessons where, unsurprisingly, the dishes focus on the seven varieties of pepper grown here.

Read more about trips to Cambodia 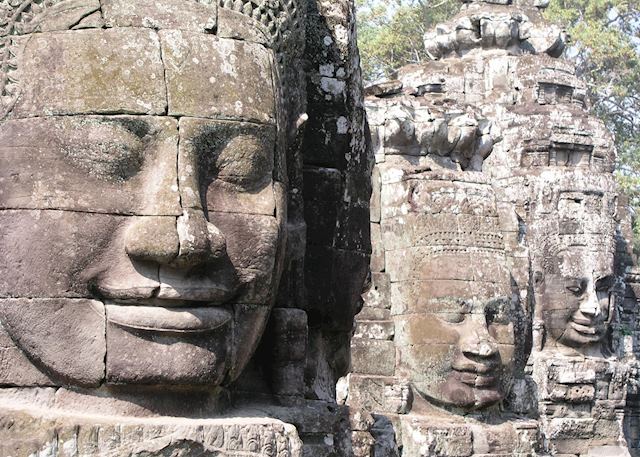