I’d argue that self-driving is the best way to explore the eastern Canadian provinces of Ontario and Québec. Whether you visit one or both of these regions in one trip, driving gives you the time, freedom and flexibility to experience them fully.

In Ontario, you might team a city break in Toronto with canoeing in Algonquin Provincial Park, looking out for beavers and moose. Driving in Québec, meanwhile, means you can stop on a whim to explore some of the French-speaking towns and villages that dot the Charlevoix countryside. Or, skim the Gaspésie Peninsula’s coastline, known for its whales, historic lighthouses and wave-cut rock formations.

Time needed to drive this route: At least ten days

Look past Ontario’s obvious attractions, its cities and Niagara Falls, and the province is also home to vast swathes of countryside, dense forest, and sparkling lakes where you’ll see few other people. Self-driving gives you a fuller picture of Ontario as you travel through small towns and untouched natural landscapes, stopping as you please.

Toronto makes a good first port of call. The country’s largest city, its museum, galleries and markets introduce some of Canada’s history and culture, while the CN Tower gives you literal views over the skyline and shimmering Lake Ontario. Just 90 minutes’ drive away is Niagara Falls — stop off at one of the wineries en route to sample some of the region’s reds and whites.

From Toronto, I recommend driving three hours north to Algonquin Provincial Park. The journey takes you through the Muskoka region, also known as ‘cottage country’. Vividly green in the summer and dappled red, orange and yellow in fall, this area is strewn with lakes, streams and forests. You could stop for lunch in the waterfront town of Huntsville, tucked between the hills.

Algonquin makes up for its lack of mountains in the peace and solitude you find among its dense firs, wildflower meadows, maple-scattered hills and mirror-like lakes. I’d say spending a night or two here in a log cabin is a quintessential Canadian experience.

Another three-hour drive east gets you to Ottawa. I found the capital more traditional in feel to Toronto. Its Gothic revival parliament buildings sit on the banks of the Ottawa River, there are height restrictions on buildings (in contrast to Toronto’s skyscrapers), and parks and gardens give the city a green flourish.

At this point, you could return to Toronto via a four-and-a-half-hour drive along Lake Ontario’s northern shoreline. Alternatively, hop over the provincial border to explore Québec.

Things to see and do en route

In Toronto, I particularly recommend taking a guided tour of St Lawrence Market, where vendors have been selling fresh food for more than 200 years, from maple-glazed salmon to coils of fiddleheads (a type of fern) fried in butter and salt. Sports enthusiasts can join Blue Jays fans in watching a game of baseball. Or, head over to one of Lake Ontario’s islands to walk or cycle through leafy parks with views over the skyline.

You can visit Niagara Falls independently or on a guided tour with a small group. The Hornblower Cruise sails as close to the falls as you can get (waterproof ponchos are optional). Or, for a full, bird’s-eye perspective, soar above the falls in a helicopter. You can also explore the historic town of Niagara-on-the-Lake with its cafes, galleries and shops.

Algonquin has lots of walking and cycling trails that take you through forests and skirt around lakes. You can even see wildlife from Highway 60, which crosses through the park — moose in particular like to lick salt from the road’s surface.

I always try to spend time in a canoe when I visit, looking out for beavers and otters, and moose wading in the water. You can also do paddle boarding and trout fishing along the creeks and streams. In the evening, you can join a group ‘wolf howl’ session, led by one of the park rangers, listening out for replies from resident wolf packs.

In Ottawa, I like visiting the Canadian Museum of History, which holds exhibits on the culture of Indigenous Peoples. You can also walk or cycle along part of North America’s oldest continually operated canal system, the UNESCO-designated Rideau Canal, which stretches 202 km (125 miles) to connect the city with the Great Lakes.

Time needed to drive this route: At least ten days

While Ontario showcases British-influenced Canada, Québec’s French heritage gives you the other side of the coin. As you drive around the Charlevoix region, you could be forgiven for thinking you’d stumbled into France.

Montréal’s residents are predominantly French speaking, and Old Montréal’s cobbled streets, churches and cafe-lined Place Jacques-Cartier are reminiscent of a French town. Drive three hours (or catch a 40-minute flight) to Québec City and the same applies in the continent’s only walled city. I like simply to stroll around the narrow, winding streets, browsing one-off boutiques and sitting outside with a coffee as horse-drawn carriages roll by.

You can spend the next few days driving around the laid-back Charlevoix region northeast of Québec City. Here, small villages and towns huddle in gentle valleys. You can stop in some of them to try local produce, such as cheeses, pâtés and handmade chocolates.

I recommend basing yourself in La Malbaie, once a leisure destination for wealthy Toronto residents and New Yorkers. Here, you’re well-placed for venturing into the Parc des Hautes Gorges de la Rivière Malbaie, where a series of deep valleys have been carved out of high mountains.

You could continue your journey farther north to visit the beautiful Saguenay Fjord, or explore the Gaspésie Peninsula, known for whale watching (June to October), historic lighthouses and the unusual rock formations along its wave-beaten coastline. Afterwards, drive back to Québec City and fly on to Montréal for your international flight.

Things to see and do en route

A private walking tour of Old Montréal puts the city’s history of feuding British and French settlers into context. Your guide leads you through the cobbled streets, telling you about landmarks such as the Notre-Dame Basilica and the 18th-century Château Ramezay, formerly a governor's residence and now a museum. Follow on with a stroll around the Montréal Botanical Garden (Jardin Botanique), or sample some French cuisine in one of the city’s many restaurants — Au Pied de Cochon is a good choice.

You can also try local specialities on a food tour of Québec City. Tasting your way through the old and newer districts, you might sample cheeses, chocolates, ciders and maple syrup. Your guide knows the best places to go and tells you how the city’s history has influenced its food. River cruises and horse-drawn carriages are other ways to explore, or we can arrange for you to join a walking tour.

Your time in the Charlevoix is all about soaking up the rural scenery along the St Lawrence River, passing through pretty towns and villages with clapboard houses. I’d explore at a leisurely pace, stopping wherever piques your interest. Each village has its own church, but the most impressive is the Catholic Basilica of Sainte-Anne-de-Beaupré, which draws pilgrims with its reputed miraculous healing abilities.

If you drive up to Tadoussac, at the mouth of the Saguenay Fjord, you could join a whale-watching trip to look for blue, humpback and minke whales, as well as white belugas. This area’s sandy beaches and coastal paths give you impressive views over the fjord’s deep-blue water. 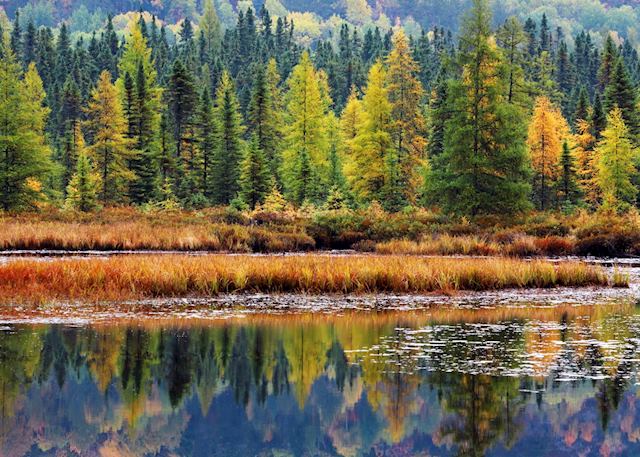