Our guide to Easter Island

After a five hour flight from Santiago across nothing but ocean, South America is long forgotten. Easter Island, a remote speck of volcanic rock in the Pacific, feels Polynesian. Its inhabitants identify as Rapa Nui (the island’s name in the language of its native people, who are believed to have been Polynesian settlers) rather than Chilean. But don’t expect a tropical idyll covered in swaying palms. This is a place of wind-whipped, barren grasslands with few trees or rivers, fringed by the oversized heads of the moai.

Devotedly carved, then willingly destroyed by their creators, the moai’s history and existence is stranger than fiction. Numerous theories abound over their meaning, but you’ll find that you leave with more questions than answers.

As a visitor, you’ll be based in Easter Island’s only town, Hanga Roa. The island’s small surface area (163.6 sq km or 63.2 sq miles) makes it easy to explore by driving, walking, or cycling.

What to see and do on Easter Island

Visit the birthplace of the moai at Rano Raraku quarry

Over the grassy mounds and gentle slopes of an extinct volcanic crater lie crooked piles of igneous rock. As you approach, they come into focus. The pumice-smoothed, angular faces of moai sit upright or lie on their sides, some half-finished. Some are buried in the ground. There are 397 of them – all scattered, seemingly at random, over the hillside. One more rounded figure is thought to be female.

Rano Raraku gives you a perspective on both the moai’s origins and their downfall. My guide, who was of Rapa Nui heritage (tip: all the best guides are) helped unlock the island’s culture, history, and archaeology by painting me a vivid picture of what happened here.

The deserted quarry was once a hive of industry. Between the 10th and 17th centuries, hundreds of workers and craftsmen fashioned the moai – thought to represent ancestral figures – by hewing tuff (compounded ash) from the side of the crater.

As the moai’s popularity grew, it’s thought that different clans started to compete to create the grandest, most impressive moai. Statues from the 10th century are 1.8 m (6 ft) tall. Those created in the 17th century rise to 6 m (20 ft). As my group neared the top of a slope, we came to a prone statue, the largest moai ever found. He’s an unfinished giant whose total length is 21 m (68 ft).

Compared with some of the weather-beaten standing moai, the moai who remained buried in earth in the quarry have been much better preserved. Let your gaze linger on certain statues and you’ll see fine details, such as tattoo-like designs, on some of the figures’ backs.

There are many ideas as to why the monoliths in the quarry never made it to their coastal platforms (known as ‘ahu’). Civil war is the widely accepted theory, but while we were at the quarry, my guide outlined others. For example, having deforested their land to help transport the statues, it’s thought that the Rapa Nui depleted their natural resources, leading to conflict and starvation.

For me, one of the most arresting sights on the island was an example of moai graffiti. On the chest of one moai in the quarry, a Western-style ship with three square masts has been etched into the stone. When carbon dated, it was found to date from the same time period as the arrival of the European settlers. As I gazed at the carved shape, my guide posited that the Rapa Nui were also victims of colonization.

Branching off from the quarry is a grassy, barely marked path bordered by the rounded mounds of extinct volcanoes. On the hour-long stroll along the ‘moai path’, as it’s known, you’ll see more of Easter Island’s stark beauty: wild horses graze on the plains, and only a dilapidated farming shack, outcrops of dark rock or swathes of reddish bare earth break up the endless-seeming green. The only big clumps of trees on Easter Island exist in Hanga Roa, where they’ve been replanted.

On my walk, I learned we were tracing part of a network of roads taken by the Rapa Nui when they transported the moai to the ahu. Oral legend has it that the statues ‘walked of their own accord’ to their platforms. An archaeologist of Rapa Nui heritage, Sergio Rapu, postulated (and later proved) that this could be taken literally. A team of people can rock or ‘walk’ the moai forward 100 m (328 ft) per day using ropes. However, this method was perilous. The path is littered with statues that have been dropped on their journey and abandoned.

This 200 m (656 ft) ahu on the island’s south coast is made of huge cut boulders and resembles an oversized dry stone wall. In front of it is a plaza of smaller, spaced out stones, where ceremonies were held. The ahu supports 15 lichen-mottled moai standing shoulder to shoulder against the backdrop of Rano Raraku Volcano. Wild horses wander through at will.

Does seeing the most celebrated of all standing moai in person disappoint? Absolutely not. For one thing, there are no ropes or fences, so you can examine them at fairly close quarters. I felt they had a real gravitas, and it made me recall the words of one 18th-century Dutch settler when he first glimpsed the Moai: ‘I saw God standing in front of me.’

You also can’t help but marvel at the Rapa Nui’s ingenuity and the artisanship present in what was essentially a stone-age culture.

You’ll notice that at Ahu Tongariki, like all ahu bar one, the moai face inland. The Rapa Nui believed that the statues, imbued with their ancestral spirits, protected the island’s inhabitants from ocean-faring threats.

As with every ahu on Easter Island, the moai at Tongariki were restored to their upright position during the 20th century (work was completed here in 1996). It’s thought that, when civil war broke out on the island, clans toppled moai. You can see the signs of damage on the Ahu Tongariki moai. Some moai, in other parts of the island, have remained where they fell.

Due to its close proximity to the quarry, most people go on to Ahu Tongariki after visiting Rano Raraku. But I’d recommend you try to come back for sunrise, when the first rays of light pierce through the gaps between the statues.

Anakena, a small scoop of ivory sand with a handful of palm trees, sits at the bottom of a grassy bank petering into the aquamarine ocean. It’s thought to be the place where the first Polynesian visitors to Easter Island came ashore. The modern Rapa Nui prefer to bathe in sheltered rock pools, but I enjoyed spending an afternoon paddling here in the balmy shallows.

The real highlight is the nearby Ahu Nau Nau, a group of moai distinguished by their red pukaos (topknots). Carved from a light-red rock called scoria, they confer extra status on a moai. The presence of a pukao bestows on a moai the likeness of a chief or royal figure.

These two ahus can be easily reached via a couple of hours’ walk from Hanga Roa. A smaller-scale platform, Ahu Akivi’s seven moai are the only ones located inland, facing out to sea. Because of this, they’ve acquired a freight of myth, including the idea that these might have been aggressive moai, warning off seabound outsiders.

Ahu Tahai is remarkable for having the only moai with restored eyes – coral whites with a red scoria pupil. The result looks slightly cartoonish. Moais are believed to have had eyes, but it’s unclear whether they were a ceremonial or permanent fixture.

Discover the birdman religion at Orongo and Rano Kau

On a southwest promontory, an immense extinct crater encloses a freshwater lake, one of the island’s main water sources. Its surface is speckled with marshy clumps of vegetation that are famously fertile. Islanders grew strawberries and rice here before the area was declared a UNESCO World Heritage Site.

A short walk from the crater, the clifftop village of Orongo demonstrates the evolution of the Rapa Nui people’s religion. It consists of the low-lying ruins of stone dwellings, patterned with petroglyphs of anthropomorphic bird-like figures. If you look out to the ocean from a viewpoint in the village, your gaze comes to rest on an uninhabited islet of jagged rocks, known as Motu Nui. Its crannies shelter sooty terns.

After the islanders had lost faith in the moai, they embraced the ‘birdman’ religion. This belief system centered itself around an annual competition. The goal: collect the first unbroken sooty tern (manu tara) egg of the season from Motu Nui. Then swim back to the mainland, climb the sea cliff of Rano Kau to Orongo, and be the first to return with an unbroken egg. What I found intriguing was that the winner of this contest was deemed so sacred, he was then shunned from society.

Although Easter Island is set up for foreign visitors, it’s possible to get an insight into the modern Rapa Nui culture if you look for it.

On the streets of Hanga Roa – a laid-back town of wide roads, squat bungalows, and free-roaming chickens – you’ll hear the Tahitian-like native language spoken (Spanish is a second language here). Locals proudly bear traditional ancestral tattoos in many designs. The highlight of their calendar is February’s Tapati Festival, involving body painting, dancing and sliding down hills on banana leaves.

Try to have dinner at one of Hanga Roa’s seafood restaurants overlooking the ocean. Here, you might see local people taking part in the island’s main sport – racing in Polynesian-style open canoes.

If you have time, take a half-day walk to Easter Island’s highest point, Maunga Terevaka. From an exposed ridge, I surveyed the whole land mass. The moai were nothing but tiny dots on the coastline, overwhelmed by cobalt ocean stretching out to the horizon. It was truly the most isolated I’ve ever felt.

Where to stay on Easter Island

Although the elegant Explora Hotel offers a package of excellent walking-based activities, I suggest staying in Hare Noi, a 15 minute walk from town. More characterful in its decor than other Easter Island properties, it has a relaxed, boutique feel to it.

The southern hemisphere’s summertime (December to February) sees the best weather. But Easter Island can be visited year-round, provided you don’t mind a few overcast days. 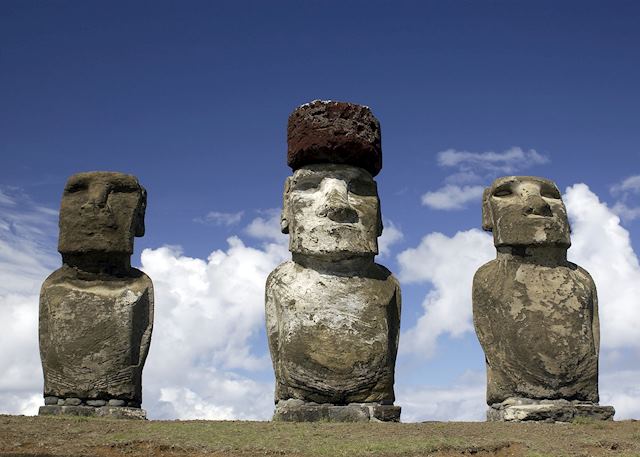