The pre-Incan civilization that lived here is shrouded in mystery, even their actual name is still unknown. Archaeologists have uncovered a mere ten percent of the statues and ruins, and it is theorised that huge mayan-like pyramids and other structures remain buried throughout the area. Other than the amazing statues, there are burial chambers and ritual edifices in the Parque Arqueologico and huge petroglyphs spread throughout the valley. 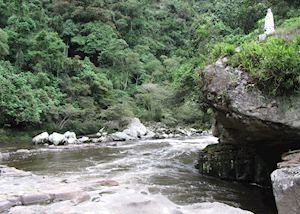 There have been comparisons made with the Mayans of Central America, and if you follow the Rio Magdalena north from San Agustin you will see that it begins on the Atlantic coast of Colombia very near the equally famous ruins of the "Ciudad Perdida," a likely landing point if the Mayans took a boat ride from the Yucatan Peninsula or crossed the Darien Gap into Colombia from Panama. Of note, carbon dating between San Agustin and Ciudad Perdida matches the same general time period of 555 BC to 1630 AD.

With regards to culture and society, archaeologists have determined a few things: The San Agustin people treated women as equals and superiors (they did have female leaders), they had a grasp of advanced mathematics, they attempted complex surgeries and they were obsessed with the idea of life after death. People were ritualistically sacrificed, burned alive and sometimes buried alive under the influence of hallucinogens.

Start planning your tailor-made holiday by contacting ​one of our Colombia specialists...