Old Cairo is contained within the boundaries of the Roman fortress of Babylon, where the Copts built their churches for protection. For three hundred years, from the conversion of the Emperor Constantine until the arrival of Islam, Egypt was a Christian nation and the Coptic church is one of the oldest communions as well as the church that really pioneered austere monasticism in the remote desert.

There are still tens of thousands of Copts in Egypt, many of whom live in Old Cairo. Their most famous church is that of El Muallaqa, the Hanging Church, built over one of the gateways into the old fortress, its nave suspended above the passageway. One of the attractive things about the church, besides its intricately decorated interior, is that services are still held in Coptic.

Although dead in the daily life of the Copts, this is the language that evolved out of Ancient Egyptian and the closest anyone will ever get to hearing how the pharaohs spoke.

Also in Old Cairo is the synagogue of Ben Ezra. Once home to many Jewish families, few now remain scattered throughout Cairo. There has been a religious building on this site (initially a church, then a synagogue) since at least the 4th century, and the present synagogue houses a Torah on gazelle skin that dates to the 5th century BC. 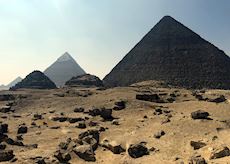 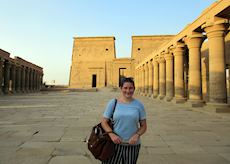