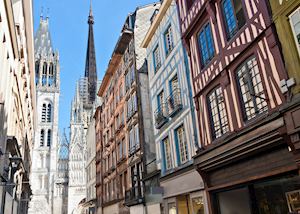 Also of note is the modern church dedicated to Joan of Arc in the Place du Vieux Marché. Its unusual  angular shape is tempered by stained glass windows taken from a previous Renaissance chapel. The church stands near to the spot where Joan of Arc was burned at the stake in 1431.