French Polynesia is the kind of place to throw caution to the wind - you are in paradise so you might as well push the boat out and stay in one of the world’s most stunning resorts.

This is the ultimate place to stay in an over-water bungalow, where breakfast is brought by outrigger canoe while tropical fish swim below.

Tahiti is the main island, and where you’ll find the capital and the international airport of Pape’ete: with a selection of good resort hotels close to town this can be a good base for those on a short stopover.

To make the most of French Polynesia, however, it is best to travel further to one of the surrounding islands. Some offer world class resorts, others intimate private island retreats, and almost all provide the chance to explore little-visited cultures, remote in their ocean setting.

Island hopping allows the opportunity to mix and match experiences, and we can recommend appropriate island combinations to suit your plans. It is often necessary to overnight on Tahiti itself and then take scheduled flights the next day to smaller islands, often completing your journey by boat.

Tahitian and French are the official languages of French Polynesia. Within the islands on the main tourist route, French dominates but English is also widely spoken. The further off the beaten track you get, the more you will find that only French and the Tahitian dialects are spoken, with locals often mixing the two.

French Polynesia is the place for those who love fish and seafood as such fresh produce is in abundance, whilst colourful vegetables, exotic fruits and tender meats also feature on most menus. Pork, chicken, fish and vegetables are cooked in a traditional oven, which is dug into the ground. After several hours the oven is opened, often as part of an evening's celebrations to songs and music, and is served in a buffet style.

Tipping and bargaining are not expected in French Polynesia, although many of the restaurants in the larger resorts will leave a space on your bill for a tip if you choose to leave one. It is sometimes possible to bargain for discounts on black pearls, or on arts and crafts when buying direct from an artist.

The unit of currency in French Polynesia is the franc cours pacifique (CFP), referred to simply as the Pacific Franc, although the Euro is now widely accepted and is generally used at all the larger resorts.

The Polynesians are generally extremely laid back, and there are few situations which are likely to cause embarrassment. Dress is casual, with sarongs, shorts and T-shirts being the most common attire. The Polynesians are very religious, so dress appropriately if attending a church service, and if you visit archaeological sites, do not touch or move the sacred stones or tikis, these areas are of great spiritual importance. When visiting a Polynesian home, or if you are staying in a smaller, family-run property, you should remove your shoes at the front door.

When to go to French Polynesia

You'll find temperature and rainfall information, together with a month-by-month guide on visiting, on our guide for when to go to French Polynesia. 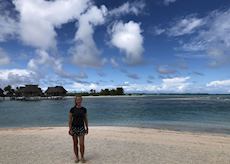 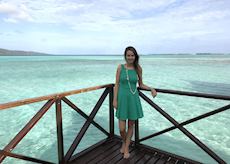 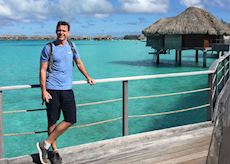