This full-day tour to Epidavros gives you the opportunity to explore these ruins in an intimate and relaxed way. You’ll have the benefit of an experienced private guide who’ll talk to you in detail about this site — a hub of medicinal excellence in ancient Greece, with patients coming from far and wide to partake in its healing rituals. Your tour includes spending time at the site’s amphitheatre, where your guide will demonstrate and explain its powerful acoustics. Then, to round off your tour, you’ll be driven to a local olive oil producer for a tour and to sample their wares.

The tour begins at your hotel in Athens or Nafplio, where you’ll be collected by your driver-guide and driven to Epidavros. The journey from Athens takes roughly two hours and from Nafplio about half an hour.

Epidavros was dedicated to Asclepius, the Greek god of medicine. It was believed at the time that physical maladies resulted in a large part from mental stress, so healing required far more than simply medicine and doctors: exercise, diet, art and theatre were key parts of the healing regimen, too.

Wandering around the site, it’s easy to see how this place of healing would have been in high demand among the ancient Greeks. Set in a wooded valley against a backdrop of rolling hills, the scent of thyme and pine permeates the air and the atmosphere is serene. Along with hospitals and hotels, thermal baths, a gymnasium, and homes for the physicians, the site holds one of the most acoustically refined theatres in Greece.

The 14,000-seat theatre was buried in an earthquake which preserved it, and even today, a coin dropping on the stage can be heard from the top row. Your guide will explain the history of the location, including the theatre’s architecture and acoustic properties, and you’ll have a chance to climb up the steps to hear the acoustics in action.

You’ll then tour the rest of the site before visiting its small museum. The museum is a bit tired, and most of the finds from the site are held in the National Archaeological Museum in Athens, but it still offers a good impression of what the site looked like in its heyday.

After the tour of Epidavros, you’ll continue with your driver and guide to the Melas olive oil producing facility where you’ll learn what makes Greek olive oil so well-respected around the world. You’ll tour the production area and learn about the rigid standards set for creating the oil. The tour ends with a simple snack of bread and sliced vegetables, during which you can sample Melas’s olive oil. After sampling the oil, your driver will take you back to your hotel in Nafplio or Athens.

As the paths around the site of Epidavros are dirt and gravel, we recommend wearing comfortable walking shoes for your tour. It’s also advisable to take sunscreen, sunglasses and a hat in hot weather, as the site offers little shade.

Other experiences in Nafplio

Start planning your tailor-made holiday by contacting ​one of our Greece specialists... 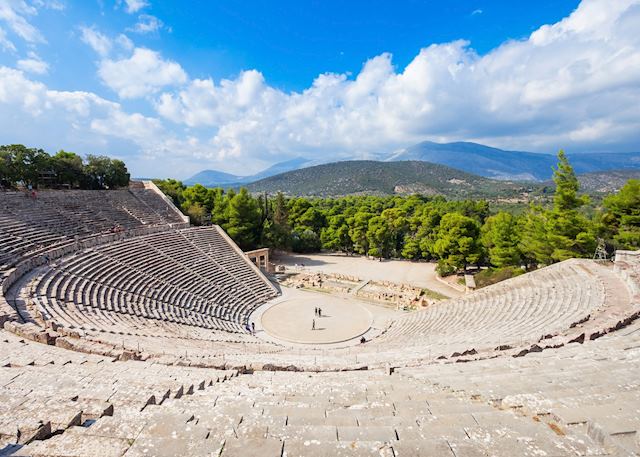