Almora itself occupies a horseshoe-shaped ridge and is an important market town and administrative centre and is also considered the cultural capital of the area, also known for Jim Corbett's tiger escapades. Its stone paved roads, wooden houses with beautifully carved façades and homes decorated with traditional murals reflect its heritage.

Also in this area is the luxury retreat of 360° Leti overlooking the Ramganga River and ancient terraced lands, with snow capped mountains behind. 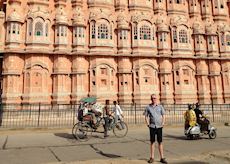