At first glance, Mumbai is a mass of furious traffic, frantic noise and people. One of the most populated cities in the world, it sprawls out from its colonial middle to regimented residential housing blocks, ever-growing as people come to make their fortune. With some of India’s wealthiest residents sharing a view with some of its poorest, the contrasts of modern Mumbai, India’s financial hub, become ever more apparent.

Spend a little time here and you can look beyond the contradictions and flaws to see a proud metropolis, with inhabitants keen to show you their city, from the enterprising women in Dharavi slum to hoteliers providing some of the most luxurious experiences in Asia.

I always think of Mumbai as India's most cosmopolitan city. There’s so much to explore amid the hustle and bustle and it's easy to see the 'real city' – even close to the main sights.

Things to see and do in Mumbai

Take a boat to Elephanta Island

The thin line of Elephanta Island is just apparent through the mist from the ferry port at the Gateway of India. Originally named Gharapuri, Hindi for ‘city of caves’, the island was re-named by the Portuguese after a long since demolished elephant sculpture. The labyrinth of cave temples at the heart of the island are considered to contain some of India’s most impressive temple carvings.

Arriving on the island, you can walk or take a miniature train to the caves, hewn from solid basalt rock and now a UNESCO World Heritage Site. The history of the island is uncertain, but experts agree the caves date from around the 7th century. The majority of them are dedicated to Lord Shiva and decorated with intricate carvings and crisply cut columns.

Mumbai’s first harbour landmark, the Taj Mahal Palace has been entertaining maharajas, dignitaries and celebrities since 1903. One way to experience its century-old hospitality is visiting for high tea. 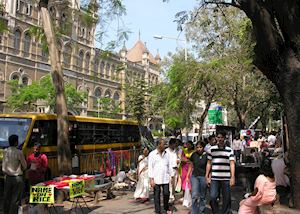 Nicknamed the City of Dreams, Mumbai swells with millions of people every year who arrive in search of a better future. The resulting industrious bedlam is best seen in the early morning as the thousands of small businesses that keep Mumbai running begin work.

Accompanied by a local guide, you can go behind the scenes to see how the city functions. The tour visits a newspaper sorting facility where millions of newspapers are sorted into seven different languages before being distributed throughout the city, and the nearby marketplace as it receives its daily intake of over 100 tonnes (220, 462 lb) of fresh produce.

Another stop is one of the world’s largest flower markets, where women sit sewing garlands while 20 tonnes (44,092 lb) of fish is loudly auctioned off in Sasoon Docks close by. The flurry of activity is over and swept away before many have had breakfast.

See the origins of Mumbai in Worli fishing village

Mumbai was built on an archipelago of seven islands with Worli at its heart. The city’s original fishermen settled here, and the fishing village has retained its tradition and culture as the modern metropolis has developed around it. You’ll definitely need a guide as you walk around – the narrow and winding streets were built that way to confuse pirates.

By timing a visit as the morning catch comes in, you can watch the fishermen’s traditional techniques, which haven’t changed for hundreds of years, and the women debating prices. Climbing up to the British-built Worli Fort, it’s possible to see almost the full extent of the Bandra-Worli Sea Link highway, an engineering marvel spanning Mumbai’s coastline.

You can only really appreciate the size of Asia’s largest slum by looking out the window when flying into Mumbai. The warren of narrow streets is home to more than one million people. It can be smelly (you will encounter open sewers), dirty and overwhelming on occasion, but taking a tour of the slum is an insight into one of the most productive and resourceful communities who live and work here with startling good humour.

A boggling array of micro enterprises operates out of the slum, from potteries and soap makers to recycling and embroidery businesses. Tours are run by a not-for-profit company, which donates the majority of its proceeds to local charities and ensures the tour is culturally sensitive – you’ll be dissuaded from taking photographs.

Creating over 900 films a year, twice the output of Hollywood, the Bollywood film industry is an important part of Mumbai’s culture. The most prolific studios, Sankraman and Balaji, open their doors for visitors to see the mechanics of the industry.

Depending on the filming schedule, you might see movies being shot on set or get a peek into the glamorous make-up room. In a post-production suite, you’ll be shown how visual effects are added and the epic scores are composed and dubbed in. You can watch dancers re-create some famous Bollywood dance routines and even a few stunts in the purpose-built dance studio.

With its coastal position, Mumbai benefits from a continual sea breeze. The light winds help temperatures stay comfortable at around 32°C (90°F) between October and March. The period around Christmas and New Year is a very popular time to go to Mumbai, but it can be very crowded. We don’t recommend travel from late April through to September as the temperatures can reach over 45°C (113°F) and it's rainy season.

Our itineraries will give you suggestions for what is possible when you travel in Mumbai (Bombay), and they showcase routes we know work particularly well. Treat them as inspiration, because your trip will be created uniquely by one of our specialists.

Written by our specialists from their own experiences of visiting Mumbai (Bombay), these guides will help you make the most of your time there. We share both our practical recommendations and the best ways to appreciate Mumbai (Bombay) at its best.

We’ve selected a range of accommodation options for when you visit Mumbai (Bombay). Our choices usually come recommended for their character, facilities and service or location. Our specialists always aim to suggest properties that match your preferences.

Our specialists seek out authentic ways to get to know the places that could feature in your trip. These activities reflect some of the experiences they've most enjoyed while visiting Mumbai (Bombay), and which use the best local guides. 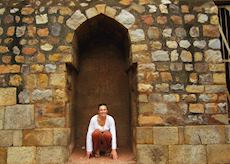