In the Sundarbans everything is on a huge scale. Vast areas of this ever changing watery habitat are cloaked in the world's largest continuous mangrove forest that covers an extraordinary 10,000 sq.km.

The delta is the largest in the world and the network of channels and mud banks support the largest single tiger population, who in turn are reputedly the biggest cats on the subcontinent. Although their tracks are often noted sightings are rare due to the tiger's excellent camouflage and the dense vegetation.

Designated a UNESCO World Heritage Site in 1987 the forests and salt flats are nourished annually by the monsoon that washes nutrients from the distant Himalaya. Aside from tigers this fragile environment supports an astonishing variety of other fauna including estuarine crocodiles who feed on the multitude of fish, spotted deer and an array of bird life. More than 220 species have been spotted with the colourful king fishers perhaps the most obvious indication of the region's rich ecology. 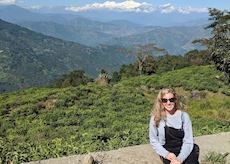