India
What is tailor made? Customised itinerary | Every trip is unique | Flexible accommodation options | Designed to your budget

Open all Close all

Today you begin your journey by boarding your international outbound flight to Delhi.

On arrival, you will be met by our representative with a sign, and led to your private vehicle with your driver. You will then be driven to your hotel for some rest and relaxation. If you are on an early flight, you might like to explore Delhi this afternoon.

You will be collected from the hotel by your driver and driven straight to the airport. This will be done so that there is plenty of time to check in and easily catch your flight from Delhi to Leh. On arrival, you are again collected from the airport and driven to your hotel in central Leh. Leh is at 3,500m above sea level. It is important to rest and relax for the rest of the day to acclimatise. Should you wish to, you would be more than welcome to visit the Shanti Stupa. This monument offers fantastic views over the city.

This morning you will be up early as you visit the Thikse Monastery at 6am to witness the morning prayers. If this is a little to early for you that is not a problem, just speak with your Country Specialist. You can also spend time exploring the areas and monasteries of Thikse and Shey before your return to Leh.

A two hour drive takes you from Leh to Alchi. The drive often takes considerably longer as there are a number of interesting places to stop including; a Sikh temple, the Indus / Zanskar River confluence, Magnetic Hill and some fine photogenic examples of stark, cold desert scenery. On arrival, the rest of the day is at leisure.

The day is spent exploring Alchi with particular emphasis on Alchi Choshkor. This collection of ancient temples is surrounded by friendly markets and is easily explored.

The drive back from Alchi to Leh is broken up with a visit to the eroded remains of Basgo and Likir Monasteries. On arrival in Leh, the rest of the day is at leisure.

Today starts with a long drive from Leh over the world's highest pass, to get to the Nubra Valley. The drive could take longer as there are a number of photo stops, some amazing scenery and a recommended restaurant stop. On arrival in the picturesque Nubra Valley, the rest of the day is at leisure.

An hour's drive takes you around the valley to Samstanling Monastery. One of the more modern monasteries, you are likely to hear the monks at prayer at more sociable hours.

The drive to Nubra Valley back to Leh is likely to be considerably shorter. On arrival, the rest of the day is at leisure, but you are welcome to take a walking tour around Ladakh's capital should you wish.

You are collected from the hotel and driven to the airport in plenty of time to catch your flight to Delhi and onwards. Your return flight will arrive the same day.

The specialist who designs your trip to India will have explored the country many times and, in some cases, lived there. Their first-hand knowledge gives us the belief that no other travel company can match our expertise in helping you plan your trip. Your dedicated specialist will take the time to understand your preferences and build them into an itinerary to match, working to your budget. He or she will keep perfecting it until you’re completely happy and ready to book. 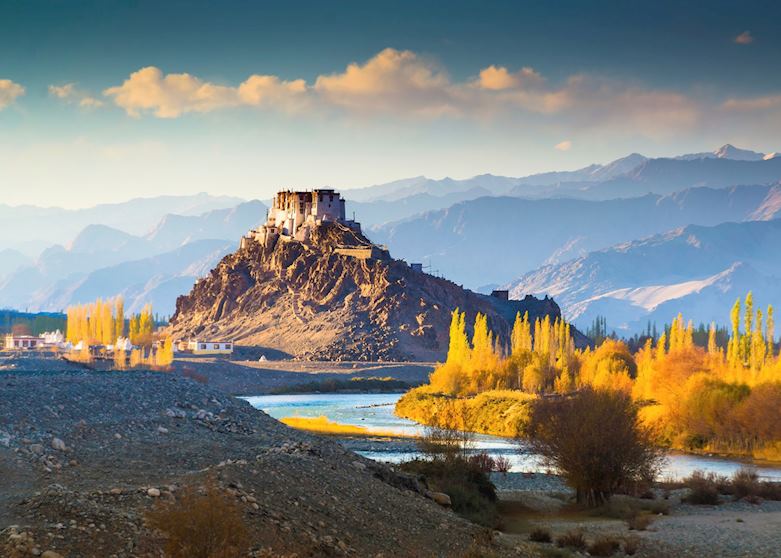 A voyage to the far flung corners of India, where the country reaches up into the Himalaya. Based around the city of Leh, capital of the former kingdom of Ladakh, this high altitude trip introduces you to monasteries and monks, roads that climb past glaciers over the highest passes in the world and sandy deserts on the valley floors. Drive through one of the world's highest pass to the Nubra Valley, visit local monasteries and magnetic hill- a striking optical illusion.