Yakushima is an island situated approximately 60 km south from the southern end of Osumi Peninsula in the southern part of Kagoshima prefecture. 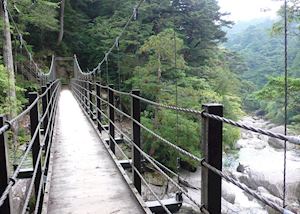 The island's main draw is the Shiratani Unsuikyo Ravine forest which is home to the abundant Yaku-sugi cedar trees which gave the island its UNESCO listing in 1994. Some of the cedars are said to be older than 5,000 years and have been given individual names, such as the oldest cedar, the Jomon-sugi.