Lake Issyk-Kul is the second largest alpine lake in the world, measuring over 170km in length and 70km at its widest point. The name meaning "warm lake" is a reference to the fact that it has never frozen - a reflection of its extreme depth, mineral content and geothermal activity in the area. 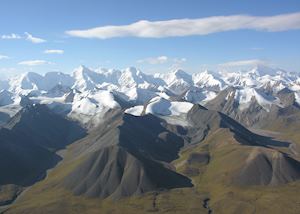 To the north and east of Issyk-Kul are the highest peaks of the Tien Shan Mountains, including 7,010 metre Khan Tengri and 7,439 metre Pik Pobedy, either side of the massive Inylchek Glacier. Further west, set in a high alpine valley is Lake Song Kol.

Start planning your tailor-made holiday by contacting ​one of our Kyrgyzstan specialists...