Despite the fast paced development, Kuala Lumpur (KL) has managed to draw a fine balance of multi-storey buildings, skyscrapers and historical sites amidst lush greenery. The garden city image of KL during the city tour can prove to be extremely fascinating.

The tour takes in Kuala Lumpur's main sites including the Sultan Abdul Samad Building, the National Monument and the National Museum.

The focus is on the contrast between the new and the old and the many different styles of architecture that are to be found in the city. You will also visit bustling Chinatown and Independence Square.

Finally you will see the Istana Negara, or King's Palace is located on a hilltop just outside the city centre and is now the venue for official functions and ceremonies and even the changing of the guard! 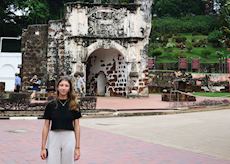