Martinborough was named after John Martin (1822-92), an Irish immigrant who purchased the large Wairarapa sheep station "Huangarua" in 1879.

John created a town just north of the existing settlement giving it street names such as 'Venice', 'Panama', 'Suez' and 'New York' and creating a central square and streets laid out in a Union Jack pattern, all inspired from a world tour he took

Martinborough has now become a unique wine village, popular as a lazy and indulgent weekend retreat for Wellingtonians, with around 30 boutique vineyards, most within walking distance of the charming town square.

The region only produces 3% of New Zealand's grapes, but offers a broad range of styles, particularly known for its pinot noir.

This sample itinerary will give you an idea of what is possible when you travel in Martinborough, and showcases routes we know work particularly well. Treat this as inspiration, because your trip will be created uniquely by one of our specialists.

We’ve selected a range of accommodation options for when you visit Martinborough. Our choices usually come recommended for their character, facilities and service or location. Our specialists always aim to suggest properties that match your preferences. 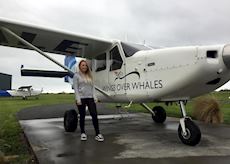