Outside the hotels most restaurants are either Indian or Lebanese, with Omani cuisine noticeably absent. Traditional Omani cuisine is fairly simple, but by using various marinades and impregnating meat with spices, the result is a mouth-watering concoction which stimulates the taste buds. Chicken, fish and mutton are regularly used in dishes. Rice is used widely and is served in a variety of ways, from steamed to elaborate concoctions bursting with meat and vegetables. Breads range from the plain to those flavoured with dates, sesame, thyme and garlic. For desert, Omani halwa, or sweetmeat, is a traditional favourite. A favourite drink is laban, a salty buttermilk. Yoghurt drinks, flavoured with cardamom and pistachio nuts are also very popular.

Generally, Oman remains very traditional. Shorts are fine on the beach, but not anywhere else. Women should wear garments which cover their upper arms and their legs at least to their knees, both men and women are expected to dress conservatively in public places. Etiquette is essential to consider in Arab countries; on the whole Oman and her neighbours are deeply conservative countries and it is important (and sometimes a legal requirement) to conform. When taking photographs of locals, especially women, always ask permission first. Taking photographs of military establishments is not allowed.Non Muslims are not allowed to enter Mosques (with one or two notable exceptions). During Ramadan, do not eat, smoke or drink in public. 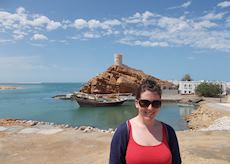 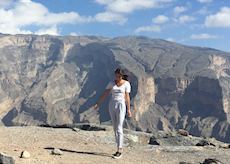