One of Europe’s finest examples of preserved medieval architecture and a cosmopolitan cultural destination, the compact city of Lucerne sits along the lake of the same name, with the edge of the Swiss Alps visible in the near distance.

The city has much to recommend it, including the flower- and flag-decked Chapel Bridge, which links one side of the cobbled-and-gabled old town to the other, across the Reuss River. The city wall, the clock tower and the Lion Monument are highlights in a walk around the old town.

The pedestrian promenade along the waterfront features grand hotels, restaurants and shops. The lake itself is also a focal point, and swimming and sailing are popular pastimes.

From Lucerne, you can take a paddle steamboat cruise on the lake to view the scenery while enjoying a three-course lunch. Or take it across to the cog railway station, where a steeply climbing tram pulls you up to Mount Pilatus. 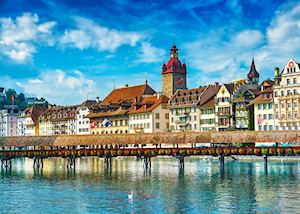 The old town of Lucerne looks fanciful, with its tall, narrow buildings, steeply-peaked roofs and pastel-painted walls, whose different shades once indicated the nature of the businesses to those who couldn’t read.

Many bridges span the Reuss River, which the city straddles, and the bridges, like the balconies, are draped with geranium flowers. You can still walk across the oldest and most beloved of these, the Kapellbrücke or Chapel Bridge. This long covered wooden bridge was almost entirely destroyed by fire in 1993, but painstakingly restored to its 14th-century design.

You can walk the outside of the old town along the Musegg Wall, another 14th-century feature, and climb some of its tower fortifications for views across the city and Lake Lucerne. The oldest of the wall’s nine towers is the clock tower, which still chimes one minute before the church bells. This so-called privilege of first stroke was historically a demonstration of the city’s power ahead of the church.

Walking the city is the best way to see all of Lucerne’s charms, and we can arrange a private guide to lead you to the highlights, like the geological wonder of the Glacier Garden and the sandstone Lion Monument, commemorating the Swiss Guards killed in the French Revolution. Or we can set up a private chocolate tasting at one of Lucerne’s finest independent chocolatiers.

You can take many other outings from Lucerne, by boat or by rail. We like the paddle steamer cruise on the lake, complete with a three-course lunch. We can also arrange a day trip to Mount Pilatus, which begins with a gentle boat cruise across the lake, then takes you up the world’s steepest cogwheel railway to the Alpine peaks.

Lucerne is the main urban hub in the largely rural, German-speaking part of central Switzerland, but you can easily get to the Bernese Oberland, Zürich and other areas by train.

Lucerne is most popular in May through July when the weather is mild. Although temperatures are warm then, these months also tend to see the most rain. Snow often falls from December through February, but that just increases the city’s charm.

This sample itinerary will give you an idea of what is possible when you travel in Lucerne, and showcases routes we know work particularly well. Treat this as inspiration, because your trip will be created uniquely by one of our specialists.

We’ve selected a range of accommodation options for when you visit Lucerne. Our choices usually come recommended for their character, facilities and service or location. Our specialists always aim to suggest properties that match your preferences.

Our specialists seek out authentic ways to get to know the places that could feature in your trip. These activities reflect some of the experiences they've most enjoyed while visiting Lucerne, and which use the best local guides.