Phra Wihan, or Prear Vihear in Khmer, is set atop a 547 metre spike of the Dongrek mountains.

Located on the Thai-Cambodian border about 140 kilometres southwest of Ubon Ratchathani, there has been a long running dispute between Cambodia and Thailand over ownership due to the fact that the temple entrance is accessible from just inside the Thai border but the central sanctuary stands on Cambodian soil.

Prear Vihear is an historical landmark and bears witness to centuries of worship, and, in recent years, was as a former stronghold of the Khmer Rouge.

At the time of writing there is a standoff between Cambodian and Thai troops in the grounds of the temple complex. It relates to the decision by UNESCO to award World Heritage status to Prear Vihear. 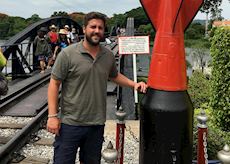