Often overlooked, these little islands receive far fewer visitors than Fiji and French Polynesia, and are all the better for it.

The main island of Rarotonga is so impressive that few venture further, but the tiny atoll of Aitutaki is even more beautiful, guaranteed to take your breath away.

Even though mass market tourism is unheard of in the Cooks, there is an impressive range of boutique resorts and luxurious retreats offering ‘barefoot luxury’ experiences in small, intimate settings.

Intrepid travellers should head for the remote islands of Atiu or Mangaia, which are virtually untouched by tourism and very rewarding; be warned, in remote regions the infrastructure is still basic and accommodation often simple and rustic.

English is widely spoken and understood, but the local language is Cook Islands Maori (Rarotongan), which is a Polynesian language similar to New Zealand Maori and Marquesan (the language spoken most widely in French Polynesia). There are some dialectic differences between the islands and some of the northern islands have their own completely separate language.

Local fruit, vegetables and inexpensive fish are to be found at the local markets and if your accommodation has a kitchen we recommend that you dine on home cooked local produce at least once during your holiday. Hotel restaurants rarely cook local food but regularly hold 'island night' buffets and barbecues where you can sample local dishes, and you may be invited to an 'Umukai' which is a traditional feast cooked underground. In the past the most important drink was kava. Kava is offered at village welcoming ceremonies and if you are privileged enough to be welcomed in this way be sure not to decline! You are more likely to come across tumunu, which is a beer brewed from the oranges found all over the islands.

Tipping is not customary in the Cook Islands and it is frowned upon to haggle over prices.

The Cook Islands use the New Zealand dollar but you may occasionally be given your change in Cook Islands cents and dollars. These have the same value but be sure to spend all of this currency before leaving the country since it cannot be exchanged anywhere else in the world.

Friendliness and respect are the most highly valued courtesies in the Cook Islands. A smile and a greeting will work wonders when it comes to interacting with the Cook Islanders, who are themselves gentle, soft, and extremely hospitable.

When to go to The Cook Islands

You'll find temperature and rainfall information, together with a month-by-month guide on visiting, on our guide for when to go to The Cook Islands.

Start planning your tailor-made holiday by contacting ​one of our Cook Islands specialists... 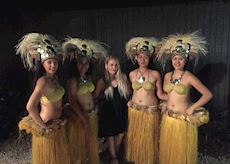