Renowned for its splendid beaches, the Philippines offers much more to travellers willing to explore further.

We will provide you with a private car and guide and recommend you venture away from the beaten track to visit the spectacular rice terraces of Banaue, the crater lakes and active volcanoes of southern Luzon and the natural beauty of Bohol.

We keep thoroughly up to date on the situation in each region to make sure your travel plans are safe. There are a few islands and specific regions with security problems but most of the Philippine archipelago remains tranquil and secure and free of tourism and the changes that it brings.

Each island has its own special character so it is well worth visiting more than one and taking time to explore inland as well as the beauty of the coast.

The language of the Philippines is Filipino, also known as Tagalog. Around 111 other languages and dialects are also spoken in Philippines, including Spanish, which is spoken across the country. Most Filipinos are bilingual, speaking at least Tagalog and another dialect; English is also widely spoken.

Filipino food is an exotic, tasteful fusion of Oriental, European, and American culinary influences with a wide variety of fresh seafood and delectable fruits. The national dish is adobo, which is either chicken or pork, or both, simmered in soy and vinegar with garlic and black pepper. Another delicacy is Lechon de leche, which is roasted suckling pig and crispy pata is pig's leg and knuckle fried until the skin is nice and crispy. Fish dishes are also good, although fish is fresher in the provinces than it is in Manila.  Dried fish and dried squid (pusit) is often eaten as a snack, dipped in vinegar. Almost every dish is served with portions of plain steamed rice (kanin). Uncooked rice is referred to as bigas. Coconut, soy, vinegar and fish sauce are widely used to add flavour.

The best beer to have is San Miguel.  Fresh coconut juice is a refreshing alternative.  Locally made rum is called Tanduay rum and it is worth trying Tapuy, a very strong rice wine.  Another locally produced alcoholic beverage is called Lambanog.  This is made from gathering the sap in coconut trees and then letting it ferment with fruit in a hole in the ground.

Western food will be available in certain parts of the Philippines.

Tipping is expected for many services, but whether you tip or not is up to you. Restaurant staff will generally expect one, even if there is a service charge included. If you're catching a taxi with a working meter, round up the amount. The standard practice is 10% of the total bill. Tipping is optional on bills that already include a 10% surcharge. It is a nice gesture to tip your guide approximately 280 pesos per day and your driver 110 pesos per day per couple/group, but again it is discretional.

Visa, Diners Club, MasterCard and, to a lesser extent, American Express are widely accepted throughout Manila and other major cities, and also in popular tourist destinations.  You can withdraw cash from 24-hour ATMs (in the Visa, Plus, Mastercard and Cirrus networks) in all cities and even many smaller towns. Most banks will advance cash against cards (generally Visa and MasterCard) for a commission. If you use credit cards to pay for airline tickets and hotels, there is sometimes an extra charge of around 2.5 percent. Some shops impose a credit-card supplement of six percent, so always check first.  You can change money in banks, at hotels and at foreign currency dealers.  Always exchange your money with authorised dealers.

Filipinos are quite outgoing, friendly and cheerful and will ask you personal questions without considering it to be rude.  They are very sociable and will offer to share a drink or meal, try not to refuse outright.

Filipinos have a sense of 'good behaviour', especially with elders and women.  Those that don't speak English may answer your questions with a nod of the head.  However, this could mean 'yes', 'no' or 'maybe'!  Most Filipinos look down upon public displays of high emotion, whether it be in the form of anger or tears. If you are invited to somebodys house it is customary and expected that you will take a gift.

When to go to The Philippines

You'll find temperature and rainfall information, together with a month-by-month guide on visiting, on our guide for when to go to The Philippines.

Start planning your tailor-made holiday by contacting ​one of our Philippines specialists... 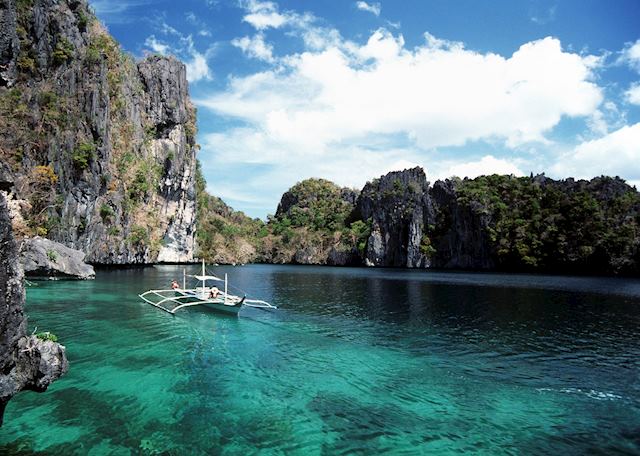