California, the USA’s third biggest state, is home to soaring redwood trees, dramatic coastal scenery and pulsating cities. I first discovered its open roads as a child on a family self-drive holiday along the West Coast, and I’m often drawn back to California to get behind the wheel again.

There’s so much to see and do here it’s hard to choose how best to spend your time, but one thing’s for sure, a self-drive in California affords you the freedom to stop when and where you like, for as long as you wish.

Coastal roads such as the Pacific Coast Highway (part of Highway 1), where sheer cliffs fall away into an endless ocean of blue, connect some of California’s most recognisable towns and cities - Los Angeles, San Francisco, Santa Barbara and Monterey.

Driving along the Pacific Coast Highway

I’d recommend travelling from south to north in California as the scenery becomes increasingly more impressive the further up the coast you drive, although if you drive in the southerly direction you are on the right side of the road to turn off for lookout points.

Driving north, the route climaxes at Big Sur, a chunk of the road that has become synonymous with Californian driving holidays. Sheer cliffs drop off into the blue ocean below, while in Pfeiffer Big Sur State Park towering redwoods shelter tumbling waterfalls, before the road turns inland towards the national parks.

You can start your journey from Los Angeles, but you’ll miss out on San Diego. This was where I first got behind the wheel in the US, and somewhere I’d definitely recommend spending a few days, should time allow.

San Diego is the second biggest city in California, yet it retains a relaxed and compact feel. It sits on the border with Mexico, just visible across San Diego Bay, which is home to a naval base.

The proximity to Mexico means there are plenty of authentic Mexican restaurants serving delicious food in an effervescent atmosphere. I tried La Puerta and wasn’t disappointed with my fish tacos, a local speciality of soft corn tortillas filled with cod, salmon or tuna and salad.

The city itself is split into a number of diverse areas. Coronado is home to one of America’s best beaches, as voted for numerous times by The Travel Channel, as well as the sizeable Hotel Del Coronado, the temporary home to 11 US presidents and countless celebrities, and a film location for Some Like it Hot. The sand on Coronado Beach glistens in the sunlight thanks to mica, a mineral found in its make up, and it was here I saw the best sunset of my most recent trip.

Just a quick ferry trip across the bay is the historic Gaslamp Quarter. This is where the city’s most recognisable sights are located, such as the U.S.S. Midway Museum and San Diego Zoo.

Exploring the City of Angels

Just a two-hour drive north of San Diego is the next stop for those driving the California coast - the sprawling metropolis of Los Angeles. Visiting the City of Angels feels like visiting a few different cities in one - and it should. It’s an amalgamation of various towns brought together under the Los Angeles banner. As such the city is very spread out, sometimes taking an hour -  or more in traffic - to travel between different areas.

You can easily fill a few days here, taking in some of the city’s more notable sites such as the Hollywood sign, the Walk of Stars and Mann's Chinese Theatre, along with the colourful billboards and restaurants of Sunset Strip. Watch out for the overall grittiness of the area though, which often takes visitors by surprise.

In comparison, Beverly Hills has a more upmarket feel about it. Here you can spend a few hours wandering around the designer boutiques of palm-lined Rodeo Drive.

For the beach, Santa Monica is a clear choice. From here you can visit Venice Beach and Santa Monica pier on foot; the latter creates a beautiful silhouette as the sun sets behind it. The beaches can be busy here, but the sea air provides a welcome breeze from the heat of the city.

From Los Angeles the road travels away from the coast slightly, crossing vast plains, farmland and, right at the end, mountains, as you reach Santa Barbara. A charming beachside town, Santa Barbara is just a two hour drive from Los Angeles but a world away.

The whole of Santa Barbara extends off State Street, which runs from the pier to the end of town. Sandwiched between the mountains and the sea, this is a great place to relax for a few days after the hustle and bustle of LA. Most hotels have free bikes for you to use and this is a delightful way to take in your surroundings.

Still recovering from jetlag I was up at 5am one time to watch the sunrise from the beach, which was already busy with people practising yoga and tai chi (this is California, after all). If you can stomach an early rise this is a pleasant introduction to the laid back Californian way of life.

The Santa Barbara Shellfish Company, at the end of the pier, is a great spot for seafood. While you can eat in the restaurant, my recommendation is to order from the take out window and enjoy your lobster tacos from the public benches that look out over the Pacific.

Pismo Beach, further up the coast, is much smaller than Santa Barbara and is actually spread over three beaches: Pismo; Shell and Avila. In the summer months the warmer waters attract whales, I spotted a pod of humpbacks just off the coast from my hotel room.

Pismo doesn't have a huge choice of eateries but a 15 minute drive away is San Luis Obispo and the outstanding Foremost Wine Company. The highlight on the menu the night I dined had to be the ‘fall off the bone’ Vietnamese ribs, complete with caramel sauce.

From Pismo, Highway 1 hugs the coast and you’re treated to phenomenal views that crescendo at Big Sur.

This is the Pacific Coast Highway, where the road dips and climbs in a thrilling series of switchbacks along the coast. There are plenty of safe stopping points to take in the views of sheer cliffs and blue lagoons, with the most popular spots using a queueing system. No one is rushing here; you don’t take this route if you’re simply trying to get from A to B quickly.

Make a pit stop at Hearst Castle, the foundations of which were started in 1919 by publishing mogul, and inspiration for Citizen Kane, William Hearst. Hearst filled his castle with an impressive art collection worth millions of dollars, which can still be seen today, so do allow at least a couple of hours for a visit.

Nearby is Point Piedras Blancas, where you can stop to see the lighthouse as well as the largest rookery of elephant seals on the west coast. Thought to be extinct in 1880, you can now see these lumbering creatures lazing on the beach in large numbers.

Travelling on, you could stop for lunch in the glass fronted restaurant Sierra Mar at the Post Ranch Inn. Perched high on the hillside above the coast, you can take in the panoramic views whilst also enjoying a glass of wine from the award-winning cellar.

Bixby Creek Bridge, further north, is another highlight of this section of the road. This magnificent structure affords spectacular views along the coast and to the ocean below.

Wildlife viewing in Monterey and Carmel

Further up the coast, Monterey is a pretty colonial town with former wharves and canneries. It’s also known for its marine life.

I signed up for a whale watching expedition and on the three hour trip was lucky enough to see orcas, dolphin pods and humpback whales.

Between Carmel and Monterey, 17 Mile Drive affords dramatic views of the Pacific Ocean and Del Monte Forest along the Monterey Peninsula. It’s also where Pebble Beach Golf Club is located, a legendary course that has attracted the likes of Teddy Roosevelt and Sir Winston Churchill.

The place I remember most from my childhood trip to California, San Francisco is a vibrant and multicultural metropolis with a distinctly bohemian feel. The rolling hills, trams, countless Chinese restaurants, seaside piers and historic landmarks make it a rewarding destination worthy of a good few days’ exploration.

A tour of Alcatraz features high on many visitors’ agenda, as does Pier 39, where a colony of sea lions laze on the boardwalk. The Golden Gate Bridge, often shrouded in sea mist but no less impressive for it, is also a highlight.

Other sites include the Painted Ladies, a collection of brightly painted Victorian buildings, and pretty Lombard Street, known as the most crooked street in America.

Vineyard in the Sonoma Valley

To the northeast of San Francisco, the sunny hillsides of Sonoma County and Napa Valley are archetypal wine country. There are simply hundreds of vineyards here, many producing exceptional wines. Often, these are intimate, family owned wineries that produce such small quantities of each varietal that you’re likely to be sampling wines only available in California.

The best way to experience these regions is to take a three hour guided tour that will stop at three local vineyards, each one different to the next. You’ll eat lunch at one of the vineyards, looking out over the vines and sampling the wines.

Sonoma has a more relaxed feel about it than Napa. It’s less built up and has numerous spa hotels, while Napa has more in the way of bars and restaurants.

The predominance of top class wine in the area has led to a great variety of good restaurants and there are plenty with Michelin stars dotted around, but even less renowned options offer terrific dining. An example is the Girl and the Fig in Napa, which has a lovely outdoor patio where you can enjoy French fusion food under the ever-present California sun.

From the wine region you can drive east into Yosemite National Park, with its glacier carved valleys, bears, coyotes and deer, and uninterrupted views of the surrounding valley, which unfolds in front of you from Glacier Point.

I’d recommend taking the Floor Tour to learn about Yosemite’s history from rangers who give a real insight into America’s first national park. If you’re a keen walker you could spend an extra day here to explore further.

A few hours’ drive from Yosemite are the towering groves of redwoods and the eponymous sequoias of Sequoia National Park, home to one of the world’s largest trees, General Sherman, at 275 feet tall.

Practicalities of self-driving in California 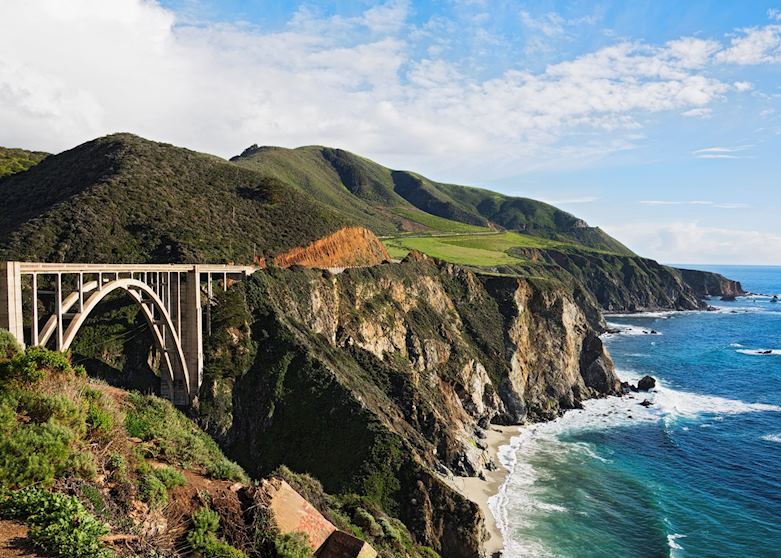 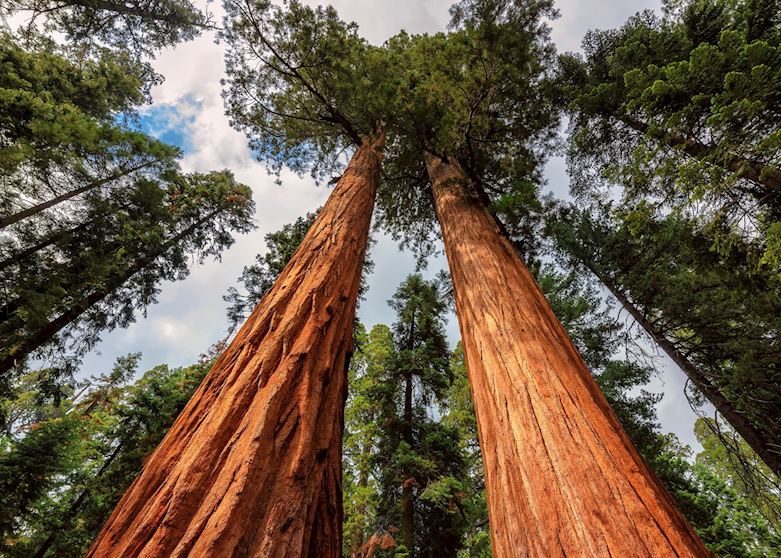 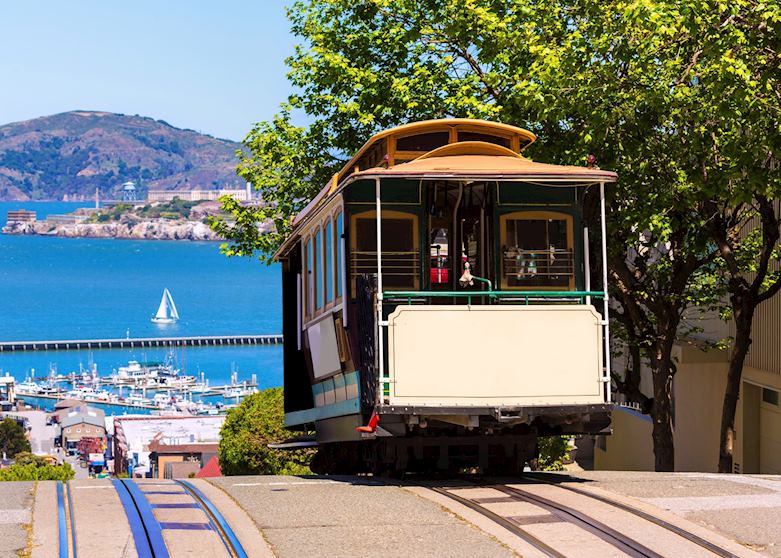