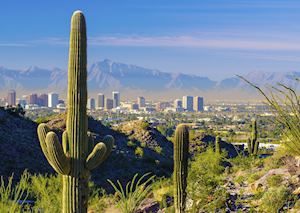 But there's more to this mild-mannered metropolis than pristine greens and tee times. The greater Phoenix area, including the affluent region of Scottsdale, offers an array of impressive cultural attractions such as the internationally renowned Heard Museum, which gives an in-depth look at Native American history, the fascinating Desert Botanical Garden and the Phoenix Art Museum. Theatre-going is also popular with top class ballet at the ornate Orpheum Theatre and Broadway shows at the state-of-the-art Dodge Theatre.

This sample itinerary will give you an idea of what is possible when you travel in Phoenix, and showcases routes we know work particularly well. Treat this as inspiration, because your trip will be created uniquely by one of our specialists.