Repeatedly passed between the Spanish and the French until joining the United States in 1803, New Orleans’ chequered history has accumulated a wide variety of cultures, nationalities and traditions. The result is a city with an altogether different atmosphere to the rest of the country, where the pace of life is relaxed and reminders of the past are everywhere you go.

Frenchmen Street, with its relaxed jazz clubs and thriving art scene, offers an authentic Big Easy experience. By day, you can sit in jazz cafes soaking up the laid-back atmosphere. The evening brings opportunities to flit between the many characterful bars, where live musicians put on world-class performances, and to wander through the outdoor night market, where local artisans sell artwork and handmade crafts.

At the intersection of Prytania Street and Washington Avenue are shops, cafes and the Lafayette Cemetery No.1. This historic cemetery features above-ground graves in elegant, white-washed vaults. The style originates from the city’s French and Spanish heritage, and many descendants of the dead still maintain their family vaults. 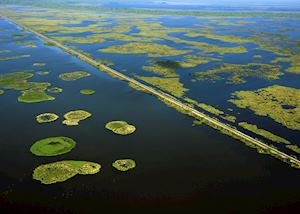 Holidays to New Orleans are best between December and May, when temperatures are warm but not too hot and humid. April and May are the ideal months for visiting; days are warm and dry, and different events take place in the city. Between June and August, conditions can be very sticky, with occasional thunderstorms breaking the heat. The hurricane season runs between June and November.

Our itineraries will give you suggestions for what is possible when you travel in New Orleans, and they showcase routes we know work particularly well. Treat them as inspiration, because your trip will be created uniquely by one of our specialists.