When I suggest taking a trip to St Petersburg or Moscow during the winter months, most people are horrified at the prospect. They envision long, dark days when the mercury never rises above freezing, or endless wind and rain. Ok, I won’t deny the sub-zero temperatures, but if you have already weathered a northern European or North American winter, it honestly doesn’t feel that different. The skies are often remarkably bright and clear.

In winter, not only do you eschew the crowds that can sometimes throng Russia’s cities in summer, I’d also argue you’re in for a richer, more fulfilling experience. Winter offers the photogenic, romantic Russia of your imagination, the snow-dusted country of Doctor Zhivago and Tchaikovsky’s Nutcracker. It’s Russia as it was meant to be seen.

Why visit Russia in winter?

Reason 1: There are fewer overseas visitors

Church of the Saviour on Spilled Blood, St Petersburg

In recent years, Russia has seen a rise in tour groups choosing to visit in summer. Although this won’t impede your trip in the summer months, it does mean you may have to wait in line a little longer than you normally would for some of Moscow and St Petersburg’s points of interest (even with pre-ordered tickets, you have to wait in line to enter the Hermitage or the Kremlin during busy times). In winter you’re more likely to have the same sights entirely to yourself, when they’re often covered in snow (see below).

Citizens walk the streets muffled in furs; frosted windows reveal displays of traditional Cossack hats (nowadays worn only by women). Snowfall adds a sprinkling of white to palaces, statues and churches, or sometimes drapes itself like thick icing over rooftops. Prospekts (avenues or boulevards) and department stores are festooned in streams of twinkling white lights reminiscent of Paris’s Champs Elysées — Peter the Great’s blueprint for his eponymous city. You’ll pass through illuminated archways, and down pedestrian-only streets with a central line of lit-up trees.

To truly get into the winter spirit, Russia-style, buy ice cream to take away at Moscow’s GUM department store. Russians wait until the colder months to eat it in the streets, which I can only conclude is something to do with a pleasing synchronicity, matching dishes to outside temperatures.

The Russian Orthodox Church celebrates Christmas on 7th January. If you pop your head into a church or cathedral over this period, you’re likely to hear the resonant, mournful singing of a cappella male voice choir. Unlike protestant or catholic services, those at the Orthodox church have no set start or finish times, so you can drop in at whim to listen to the music and admire the gold-leafed mosaics and icons resplendent in every shade of the rainbow. I once experienced the most beautifully atmospheric candlelit service at Kazan Cathedral, tucked away in a corner of Red Square and often overlooked for the gaudier, grander St Basil’s.

If you can, consider visiting on New Year’s Eve. It’s Russia’s biggest night of the year, and the atmosphere is always electric. Citizens party and drink on the streets — think joyful merrymaking, rather than drunken raucousness — as everyone gathers to hear the president’s live broadcast at midnight.

Reason 3: It’s not actually that cold… and Russia looks even better in the snow

As long as you’re well wrapped up, Russian winter temperatures can be braved. I’ve found that hotels and other interiors are kept warm and snug, and there’s always a department store or museum to dive into if the snow really starts to fall thick.

Do embrace walking around in the snow if you can, though. With a mantle of white, St Petersburg’s Hermitage looks like a great, columned wedding cake. I was also struck by seeing the city’s Pavlov Institute — where the Nobel-winning physiologist developed his theories about classical conditioning in his experiments on dogs — in virgin snow.

Peterhof Palace and its park also stay open over winter. The fountains are turned off, but to compensate more of the palace’s rooms are on show. You’re not able to take the hydrofoil to visit Peterhof, but you’ll be treated to the sight of the Gulf of Finland frozen over — a still expanse of ice stretching off into the horizon.

The translucent spirit Russia is famous for tastes so much better when it’s cold outside. I suggest taking your tasting at Moscow’s Vodka Museum, where you’ll learn how the grain-based spirit was born out of Russia’s agrarian past, how it was banned, and how it came back with a vengeance.

The tour concludes with a chance to sample three types of vodka of varying strengths. You’re encouraged to take the shots neat, but they’re complemented by a range of traditional Russian drinking snacks — pickled fish, pâtés on toast, and sausages.

A banya (bathhouse and sauna)

I won’t lie: your first visit to a banya can be a bit intimidating and rather bewildering if you don’t speak Russian, but I’d encourage everyone to try it. It’s both a classic Russian ritual and an important part of the Russian social fabric dating back to pre-revolutionary days, when all classes would mingle alongside each other while enjoying a sauna. It reminded me of a gentlemen’s club — people were sitting around, chatting and schmoozing.

You can think of it as visiting a hammam, but northern Europe and North America have no real cultural equivalents. I paid a recent visit to Moscow’s Sanduny Banya. A single-sex experience (although you can hire unisex private rooms for two to eight people), you enter what seems like an extremely grand and palatial bathing complex and you’re handed a sheet, towel, and a hair cap (which must be worn at all times).

After undressing and scrubbing yourself down, you enter the intensely dry heat of the sauna as steam hisses and rises from a freshly loaded wooden furnace. Inside, a banya attendant will exfoliate you with bunches of birch leaves. It’s an invigorating experience — my skin felt completely fresh and new afterwards. After long periods spent relaxing in the heat, you douse yourself with welcome pails of ice-cold water.

The formal gardens of Catherine Palace — Catherine the Great’s summer palace in Pushkin Village, outside St Petersburg — are extensive and bosky. They’re studded by promenades, topiary hedging, pools, pavilions, fountained squares and waterways. In spite of their scale, few visitors ever explore them, preferring to concentrate on the palace’s gilded interiors, the Rococo ballrooms and the opulent Amber Room.

In winter you also have the opportunity to ride around the often snow-covered grounds in a troika (a traditional three-horse sleigh), draped in furs. As you travel, you might see locals sledging or skiing on the banks of the river that winds its way through the palace’s parkland.

Cruise the Moskva on an icebreaker

On winter evenings, the dark, swirling waters of the Moskva River are clogged with ice. Yet I happen to think that Moscow, its buildings brightly lit at night, is a city best seen from the water.

This is especially true of the Kremlin: most visitors never see the complex from the back, but viewing its rear side, from the river, gives you a better sense of its scale. From the water, you can see its elevation and its layers: its fortress-like wall and, above that, the great gold and yellow façade of the grand palace, with church spires and onion domes spiking all around it.

To show off the city from this watery vantage, sleekly built, glass-domed icebreakers carry passengers along the river, cutting channels through the irregular mosaic of the broken ice. Lasting one and a half hours, and departing four times a day, cruises float past the Kremlin and other sights with an on-board bar and restaurant at your disposal.

Start planning your trip to Russia 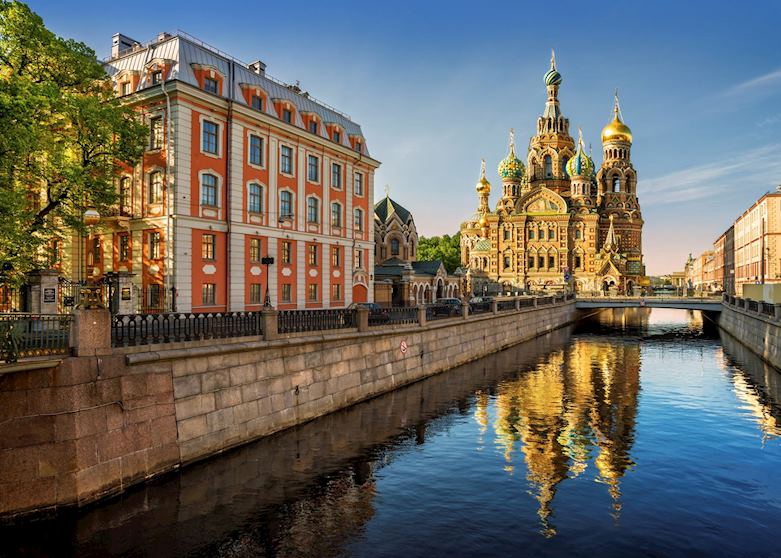 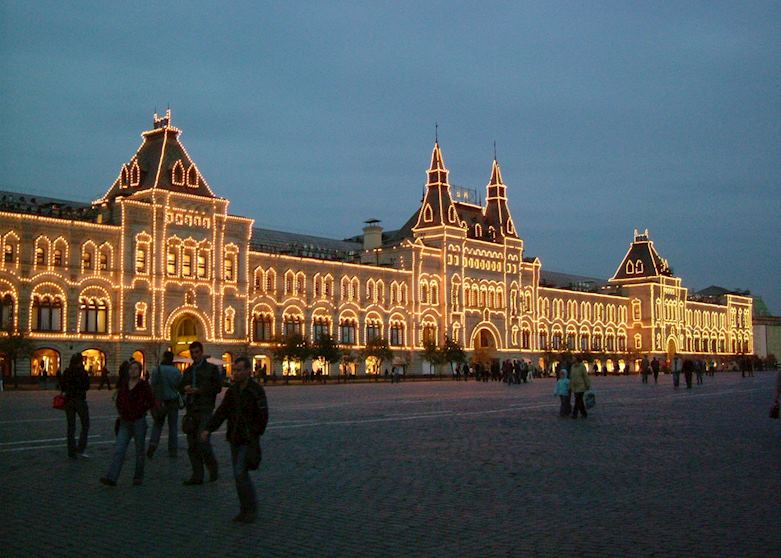 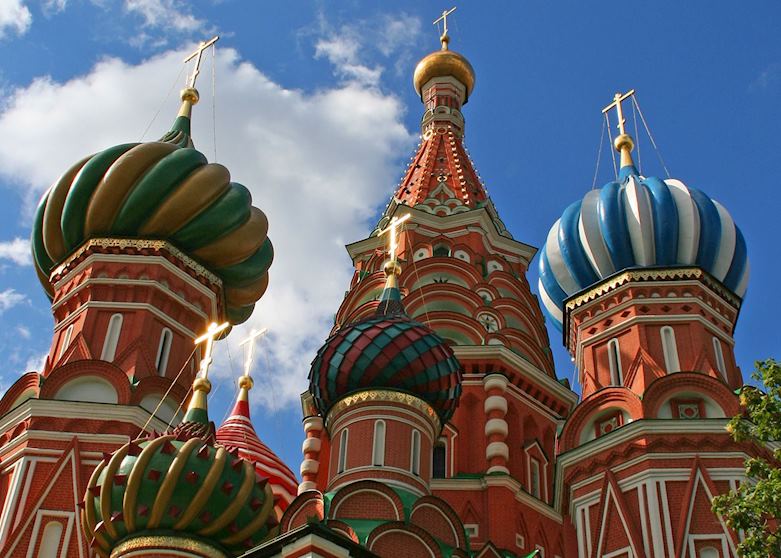 Go slow in Moscow and St Petersburg: experiences worth lingering over Family holidays in Russia River cruises in Russia