In high summer (June to August), it’s sapphire-blue and almost balmy. In winter (October to April), it’s strewn with lumps of blueish ice and swept by a watery sun and chilling winds. But, for us, this is really what Lake Baikal is about — a piece of raw Siberia, a Russia that’s far removed from the metropolises of Moscow and St Petersburg that most visitors gravitate toward. Completely ringed by mountain ranges, its shores are dense with Trans-Baikal conifer, taiga (boreal) and pine forest, save for a few small towns. Beyond all this lies utter wilderness.

Tour Lake Baikal with any guide, and you’ll find that the statistics come thick and fast: at 1,637 m (5,370 ft) it’s the world’s deepest lake, containing a fifth of the world’s fresh water. It shelters over 2,000 animal and plant species, most of which only inhabit the lake and its surrounds. It’s larger than Belgium and has water of such crystal clarity that visibility extends to a depth of 40 m (131 ft).

Impressive as these facts are, you can get a more visceral appreciation of the lake’s scale by taking a boat trip out onto it. Land fades from view and you soon become swallowed up by the lake’s enormity: it’s like you’re adrift on an ocean. 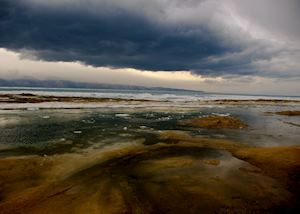 In winter, usually at the beginning of January, you can be driven across the lake (which, at this point in the year, is often frozen a solid 2 m (almost 7 ft) thick). The lake water turns a deeper blue, and great streaks of white form criss-cross patterns across the surface while in other places, the ice is a bright turquoise. You can sometimes see right through the ice to the lakebed below: setting foot on it is like walking over a glass viewing platform.

You can take hydrofoil trips from Irkutsk (the capital of Siberia that sits next door to Lake Baikal) across the water to Bolshie Koty. This small, former mining settlement makes a quiet alternative to Listvyanka, a more commercial and nondescript lakeside town. Despite being busier, Listvyanka is still a good jumping-off point for boat tours.

Look out for nerpas (Baikal seals) as you explore the lake ― an endemic freshwater seal only found in Lake Baikal. On dry land, the forested and mountainous lake shores contain elk, bears, wolves and lynx. They’re extremely wary of humans, so you’re unlikely to see them, but you’ll see signs warning of their presence.

Baikal has been home to various ethnic groups for millennia, and the shamanistic Buryat people still reside in settlements of wood cabins around the lake shore. You can sometimes see their homes from the water, or if you visit Olkhon ― one of the many islands peppered on Lake Baikal.

Olkhon has its own lakes and its terrain includes steppe, forests and mountains, making for varied and stimulating hiking. It’s also a good spot for a dip in Lake Baikal. The water is icily invigorating — to put it mildly…

You can visit Lake Baikal via a five-and-a-half hour flight from Moscow to Irkutsk, or by taking the Trans-Siberian Railway to Irkutsk. For a more luxurious journey, consider the Golden Eagle train.

We recommend avoiding the large tour groups and summer crowds and visiting in winter (October to April, though the lake can be icy even in May). This is when you’ll experience the lake at its most atmospheric and quintessentially Siberian — in our experience the cold is manageable as long as you dress appropriately.

Our itineraries will give you suggestions for what is possible when you travel in Lake Baikal, and they showcase routes we know work particularly well. Treat them as inspiration, because your trip will be created uniquely by one of our specialists.

We’ve selected a range of accommodation options for when you visit Lake Baikal. Our choices usually come recommended for their character, facilities and service or location. Our specialists always aim to suggest properties that match your preferences. 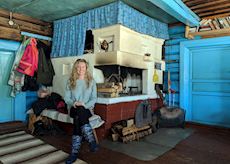