Whether you're a Vietnam War veteran or a history buff, visiting the sites of significant battles in Vietnam can be educational and emotional. Setting foot on the land that once saw brutal combat is a humbling and unforgettable experience, and our Country Specialists have compiled some of the most significant Vietnam battle sites to guide your next historical tour.

While it's a common misconception that the Cu Chi Tunnels near Saigon were built specifically for the Vietnam War, these tunnels were actually originally dug during the French-Indochina conflict in the late 1940s. During the Vietnam War, this network of over 250 kilometers of secret underground passages were used by the Viet Cong as hiding spots and the location of many military campaigns. At least 45,000 men and women are reported to have died defending these tunnels over the course of the war, and following the fall of Saigon in 1975, the Vietnamese government preserved the tunnels and turned them into a war memorial park.

Today, the tunnels are a popular tourist attraction as a half day excursion. Visitors can crawl through some of the safer areas to see for themselves where command centers, booby traps, and living quarters once existed. 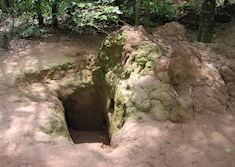 The Vinh Moc Tunnels are located on the border of North and South Vietnam. During the Vietnam War, these tunnels were built to shelter families from the bombing of the surrounding county. These tunnels were ultimately a success and people were able to stay safe inside them. Today, they are still intact and a popular tourist attraction.

The Citadel was built in 1804 by Emperor Gia Long, and though it served as the Emperor’s living quarters for quite some time, it was also the site of some of the toughest fighting of the Vietnam War. Much of the original structure was destroyed during the Tet Offensive in 1968, but its majestic architecture has been gradually restored with the help of UNESCO funding. 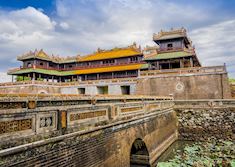 Crossing to the north bank of the Perfume River, you will enter the imposing moated Citadel, built by Emperor Gia Long in 1804.

About three or four hours down the coast from Hoi An, the My Lai war memorial lies near the country town of Quang Ngai. The memorial is for the people of the My Lai village, over 500 of whom were massacred during the Vietnam War in one of the war's most gruesome events. The memorial is set in a park and surrounded by the graves of the victims, buried in family groups among the trees and rice paddies. Visitors walk among the memorial on brown concrete pathways that are imprinted with army boots and bare feet to represent the chaos of the massacre.

The DMZ was an important battleground demarcation during the Vietnam war, separating the North Vietnamese territory from the South Vietnamese. A visit to the DMZ area takes travelers to many important Vietnam War battle sites.

One of the most popular of these sites is the area of the battle of Khe Sanh. Located in South Vietnam near the Laotian border, the battle of Khe Sanh began in January of 1968 and lasted for 77 days. As one of the bloodiest battles of the Vietnam War, this site is often visited today and even has small museum with old photographs and reconstructed bunkers. Other possible battle site visits include the Rock Pile, Camp Carol, Dakrong suspension bridge, and Lan Vay special force camp.