An insider’s guide to the districts of Paris

Like many European cities, Paris began as a small settlement which has slowly expanded over the centuries, gradually swallowing up the surrounding communities. These enclaves, known as quartiers, retained their own discrete personalities and architecture. Baron Haussmann went on to codify the quartiers when he created the system of arrondissements in the 19th century.

Whenever I visit, I spare some time to explore these distinctive districts, aimlessly strolling through their streets, browsing in the many small shops, and pausing for a cup of coffee at the intimate cafes. Away from the tourists that throng around the major attractions, the pace slows down and it’s easier to slip into a languorous French attitude.

Districts of Paris to include in your visit 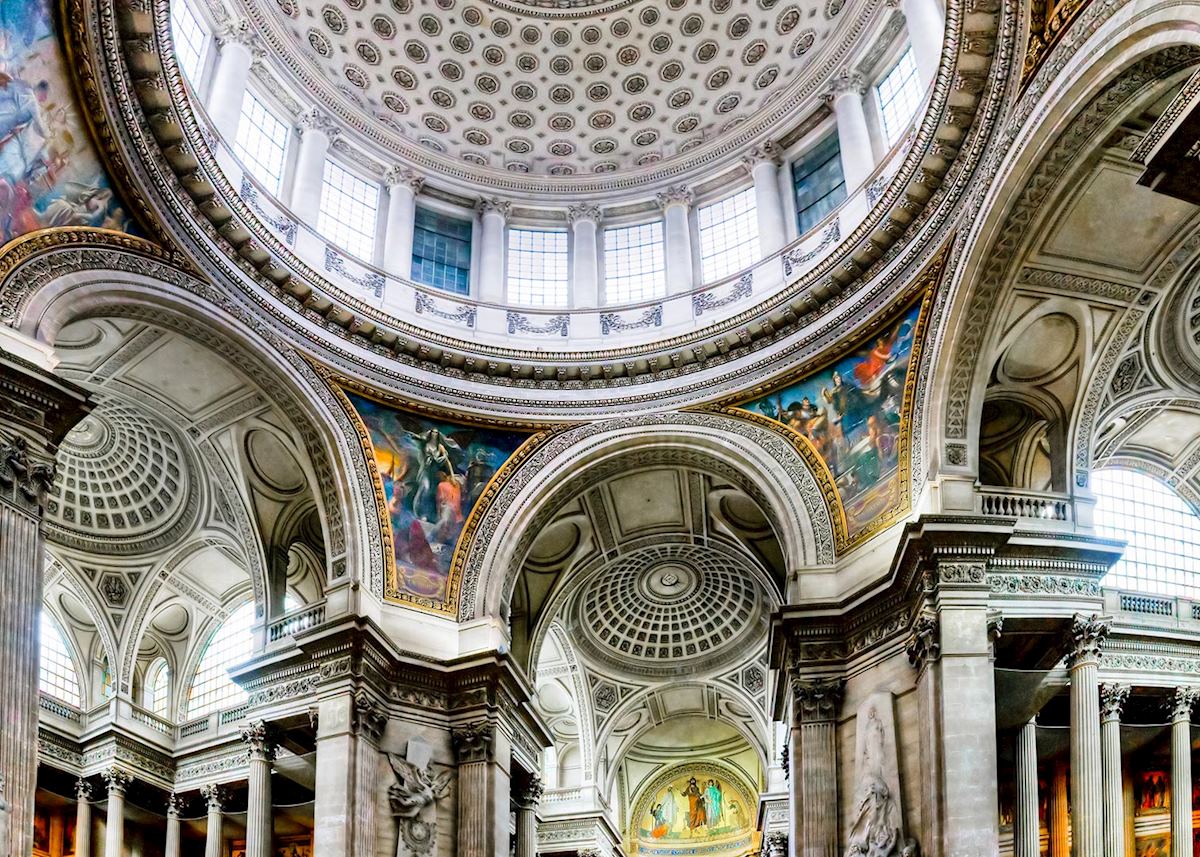 Located in the 7th arrondissement on the Left Bank, the Quartier Latin, or Latin Quarter, is home to the University of Paris, commonly known as the Sorbonne. The quarter derives its name from the fact that the students here communicated primarily in Latin, at least until the French Revolution.

Thanks to the students from the Sorbonne, as well as several other universities in the area, the area hums with youthful energy at all hours of the day and night. The streets are lined with bars and excellent but affordable restaurants. In fact, I had one of my most memorable French meals at the tiny Restaurant Au Port du Salut on the Rue Saint-Jacques, a dish of perfectly tender braised lamb.

The Latin Quarter is also home to the Panthéon, a church-turned-mausoleum that contains the tombs of some of France’s greatest thinkers, including Voltaire, Rousseau and Hugo.

As an American and a student of the French Enlightenment, I’m fascinated by the influence that these great philosophers had on our own Founding Fathers and the American Revolution. I’m also wryly amused at the fact that Voltaire and Rousseau — bitter rivals — are buried across from one another in the crypt, sentenced to glare at each other for eternity.

Natural philosopher and physicist Léon Foucault used his enormous pendulum to prove the rotation of the Earth here, too. Today, a modern recreation of the ground-breaking experiment swings ponderously under the soaring dome.

Apart from its historic role, the Panthéon is also a masterpiece of neoclassical architecture. It features vaulted ceilings that are decorated with rich murals and pierced with high windows that let in streaming sunlight that reflects off the marbles floors inlaid with bold geometric designs. The exterior features Corinthian columns and a bas-relief pediment that depicts allegorical representations of the fatherland, history and liberty. 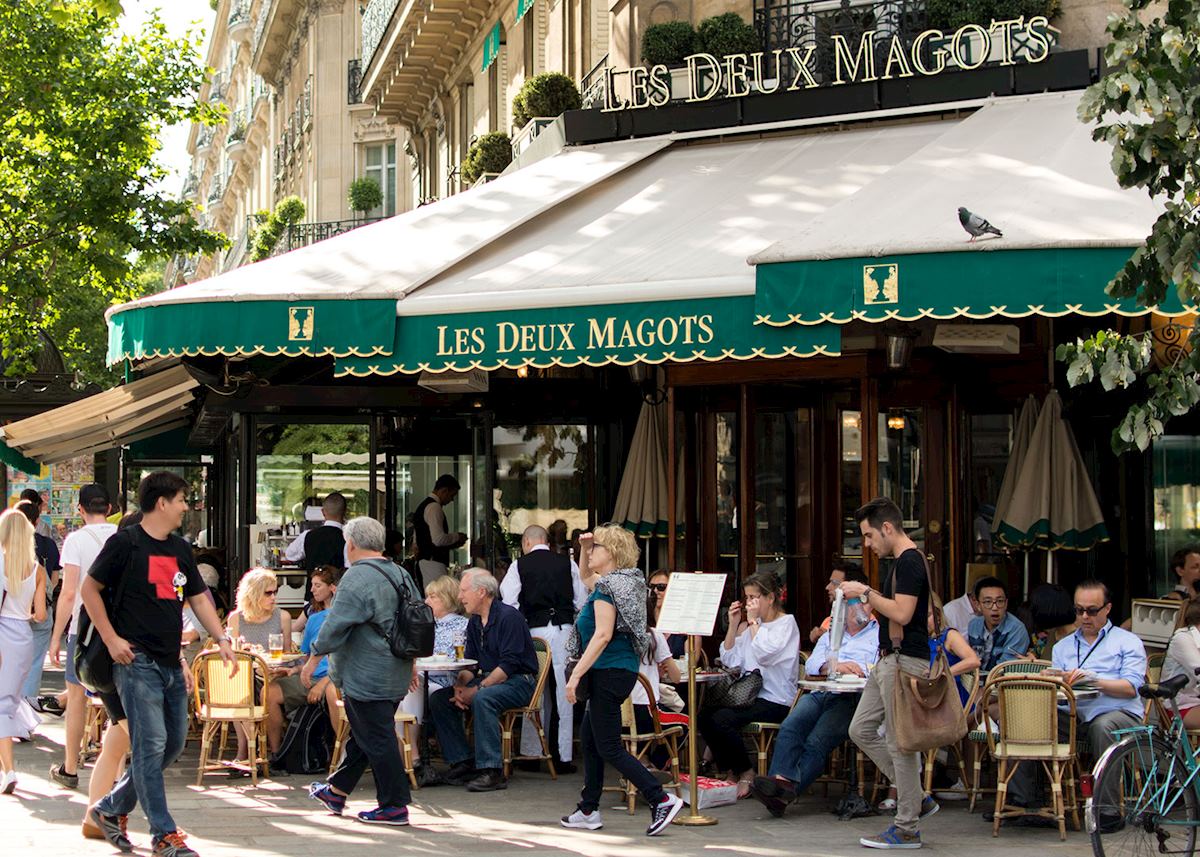 When locals want to see and be seen, they come to Saint-Germain-des-Prés in the 6th arrondissement. Also located on the Left Bank, the district is the heart of Paris’s cafe culture and boasts much of its extraordinary literary history. For me, it’s the most essentially Parisian quartier.

The district takes its name from the city’s oldest church, which dates back to the 6th century and houses the tomb of philosopher René Descartes. Also named after the church, the Boulevard Saint-Germain runs parallel to the river through the district and is home to two of the best-known cafes in the city, Café Les Deux Magots and Café de Flore.

I always make a point to spend a few hours at one of the tiny tables that spill out from one of these storied cafes. To me, there’s nothing more French than whiling away an afternoon sipping coffee and watching the endless parade of people — harried tourists, chic women in mile-high heels, distracted businessmen staring at their phones, and the occasional celebrity drawn by the area’s reputation.

Tradition dictates that it’s perfectly acceptable to linger at a table for hours, which sometimes means there’s a bit of a wait to get a seat. But the waiters here, in their long white aprons, have always been charming and accommodating. My last visit was during a family trip, and our waiter joked gently with my grandmother and fetched a clean copy of the placemat for her to take home as a souvenir. 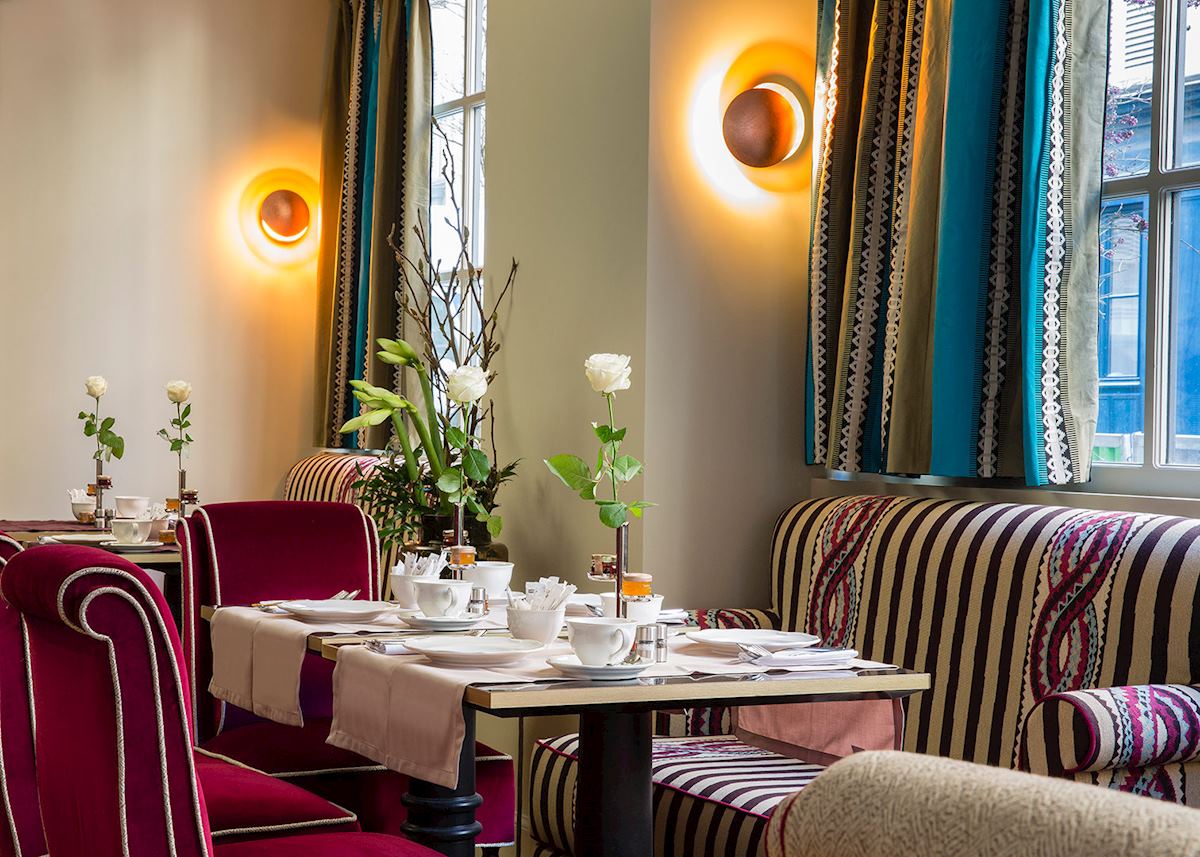 The area is also awash with small shops that offer a wide range of sweets and treats. Last time I visited, I took a guided tour of the patisseries and chocolate shops of the Latin Quarter. Among other things, you learn the long and complicated history of how croissants came by their shape and the origin of financiers (springy almond cakes).

I also like to wander through the narrow backstreets, away from the boulevard, and window shop at the designer boutiques. The haute-couture clothing, handmade shoes and elegant cosmetics are unlike anything I ever see in the United States. You can find big names like Armani, Dior and Lauren, as well as avant-garde shops by the likes of Sonia Rykiel. The oldest department store in the city, Le Bon Marché on Rue de Sèvres, sells a wide selection of the city’s crème de la crème in one spot.

Where to stay in Saint-Germain-des-Prés

On a quiet street in the heart of the district, Le Saint is an unassuming hotel tucked behind a classic white limestone façade. The lobby wall is filled with floral arrangements, and guests are invited to choose one for their room when they check in — mine was a simple bunch of white and pink roses. The hotel also has its own scent, custom blended by one of the local perfumers, which permeates the entire building. 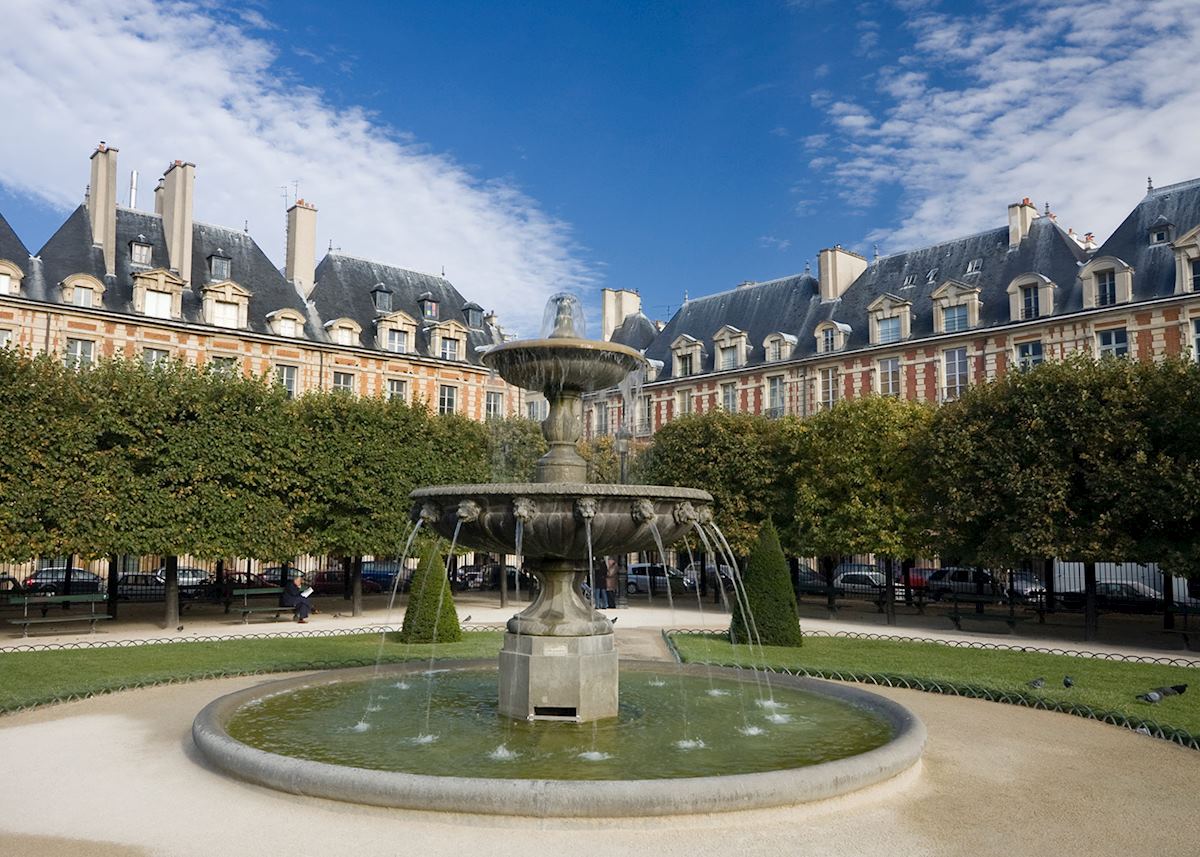 Across the river from Saint-Germain-des-Prés and spread out over both the 3rd and 4th arrondissements, Le Marais wasn’t swept up in Haussmann's 19th-century transformation of the city, leaving the area with a more medieval feel than the rest of Paris. Instead of white limestone apartment buildings, the quartier boasts a jumbled collection of modest historical homes and hôtels particuliers (17th-century aristocratic urban mansions).

The narrow streets house some of the city’s most popular art galleries, restaurants and boutiques. Unlike shops in the rest of the city, some of the stores here open on Sunday, drawing lively crowds.

The boutiques aren’t limited to selling just clothing or shoes. I recently took a guided tour of confectioners in the district and was struck by the combination of cutting-edge innovation and respect for tradition. 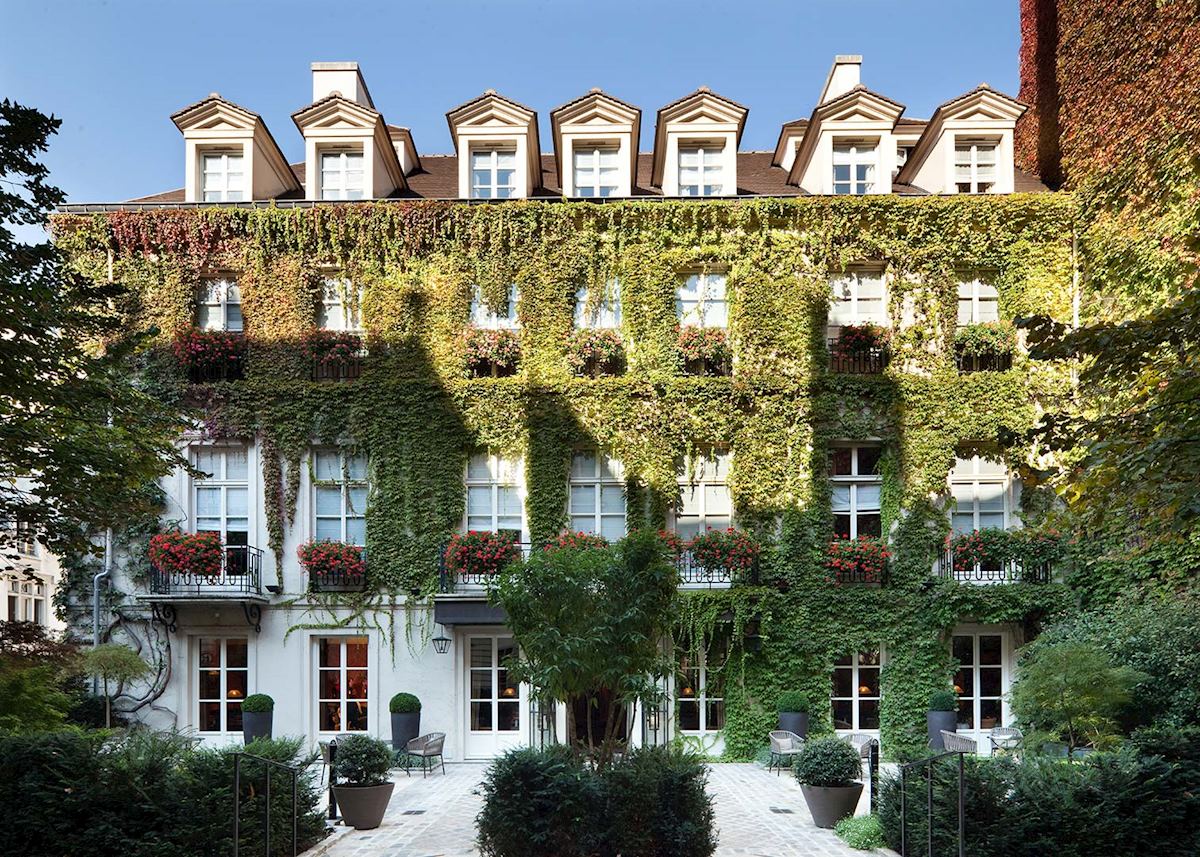 At one chocolatier, the shop keeper provided a unique tasting experience. I was with several friends and she demanded to know how adventurous (or not) each of us felt. Then she chose a selection of truffles and arranged them carefully on a small white plate, tailoring each sample to our self-admitted audacity. (I admit, I was somewhere in the middle.) My first bite was dark chocolate with the crunch of almond, a classic combination.

Madame squinted at us, judging our reactions as we finished our first options. She must have decided I was more daring than I’d let on because my next sample was spiked with Japanese whisky. It was an unusual combination, the golden lightness of the whisky practically evaporating on my tongue as the dark smooth chocolate melted down my throat.

Where to stay in Le Marais

Le Pavillon de la Reine is a boutique hotel located on the Place des Vosges, the oldest planned square in Paris. The gabled building is thickly covered in ivy and the courtyard formally arranged with abstract topiaries and tidy grass lawns. Inside, the rooms are lushly appointed with touchable textures — flocked wallpaper, plush carpets and velvet couches — which muffle the noises of the city. 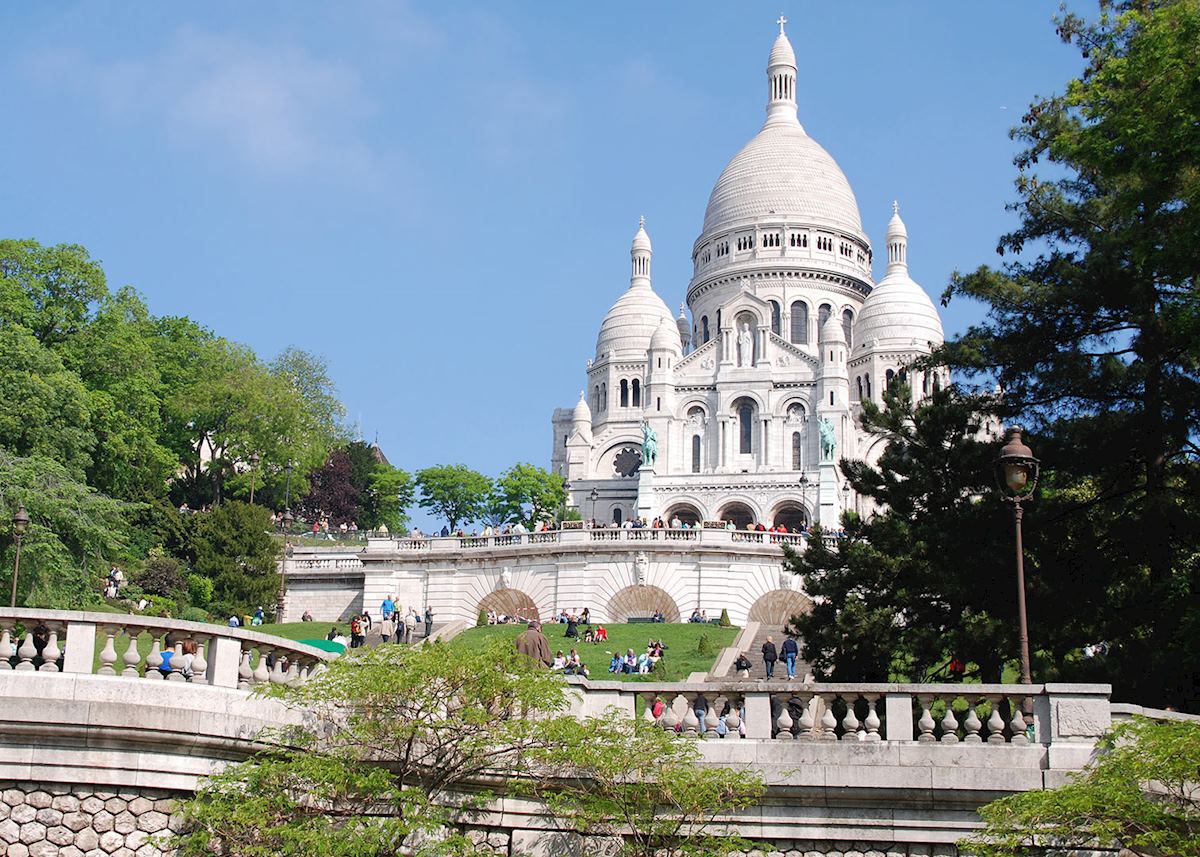 More than almost any other district in Paris, Montmartre retains an identity as a place apart. Located in the 18th arrondissement, high on a hill in the northern part of the city, the quartier was originally filled with vineyards that have, for the most part, been overtaken by urban sprawl. Just one small vineyard remains.

At the turn of the 19th century, many of the Belle Époque’s most renowned artists lived and worked here, including Van Gogh, Monet, Renoir, Toulouse-Lautrec, Mondrian and Picasso. They came for the cheap rents and sweeping views, both provided by the butte (hill) that underlies the area. Their artistic legacy lives on in the Place du Tertre. The cobbled square hosts dozens of artists every day, some of whom set up their easels and work en plein air and others who simply display their work for sale. Strolling through the forest of paintings, caricatures and sketches, you can see the multifarious ways that different artists interpret the same scene. One may draw Notre-Dame with draftsman-like precision while another creates a multihued Impressionistic painting.

There are also silhouette artists at work. In just a few minutes, using nothing more than a pair of scissors, a piece of black paper and a discerning eye, an artist I was watching cut out remarkably detailed portraits of passers-by. I wouldn’t have thought you could distinguish someone just from les portraits-ombres (literally ‘shadow portraits’), but the subjects were instantly distinguishable. A brief walk away from the Place du Tertre, the Sacré-Coeur Basilica reigns over Montmartre from Paris’s highest point. You can spot its shining white domes from almost anywhere in the city. 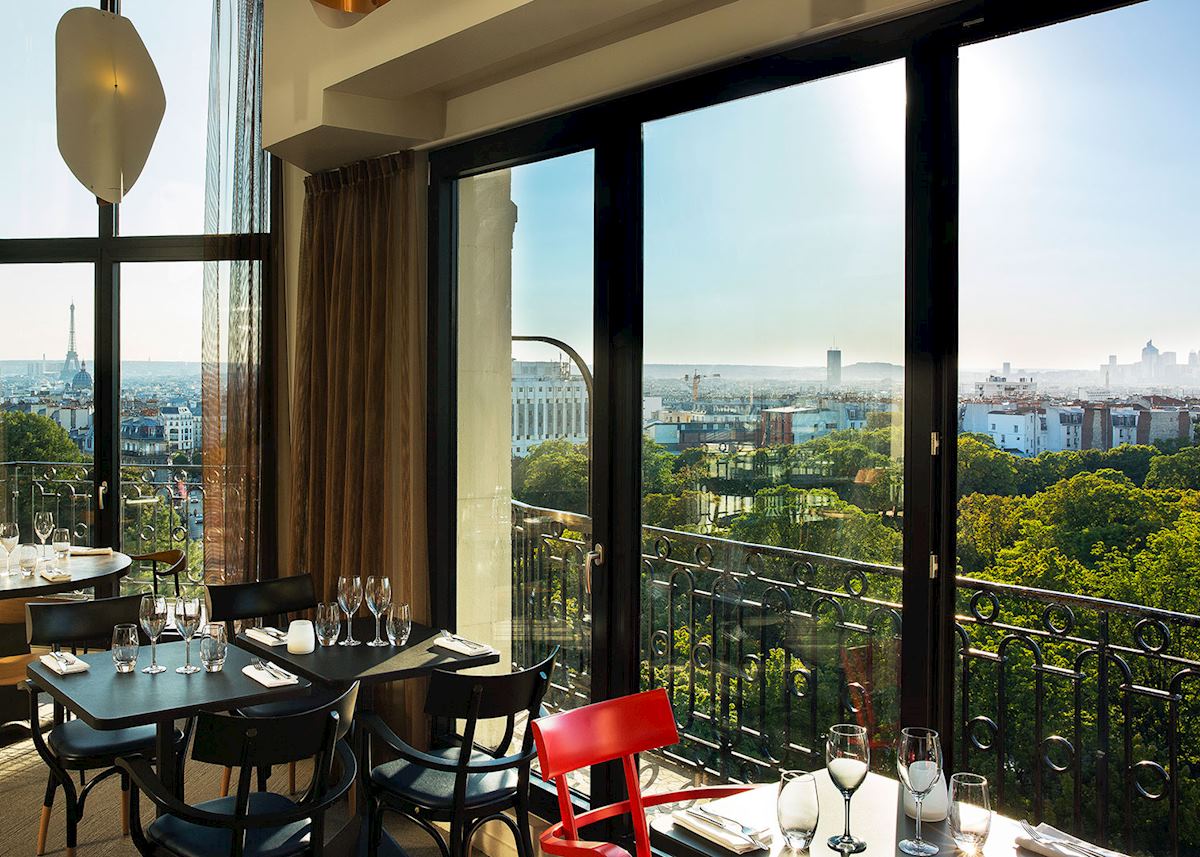 The church was inspired by Byzantine architecture and building started in 1875, intended as penance for the country’s loss of the Franco-Prussian War. It was finally consecrated after World War I, in 1919, and its conservative Catholic roots provide a stark contrast to the secular bohemians who’d settled in the surrounding streets.

A steep spiral staircase leads to the top of the dome, offering a panoramic view of the city that includes the Eiffel Tower in the distance. But even the front steps of the church offer views of Notre-Dame, the Pompidou Centre and the Panthéon.

Where to stay in Montmartre

The rooms at the Terrass” Hotel are chic and modern, but they aren’t the reason why this is one of my preferred places to stay in the city. Instead, it’s the hotel’s namesake rooftop restaurant and terrace, which give you views comparable to those from the Sacré-Coeur. There’s also a bike share station (called Vélib’) across the street, which provides a low-effort way to get down the steep hill.

Start planning your trip to France 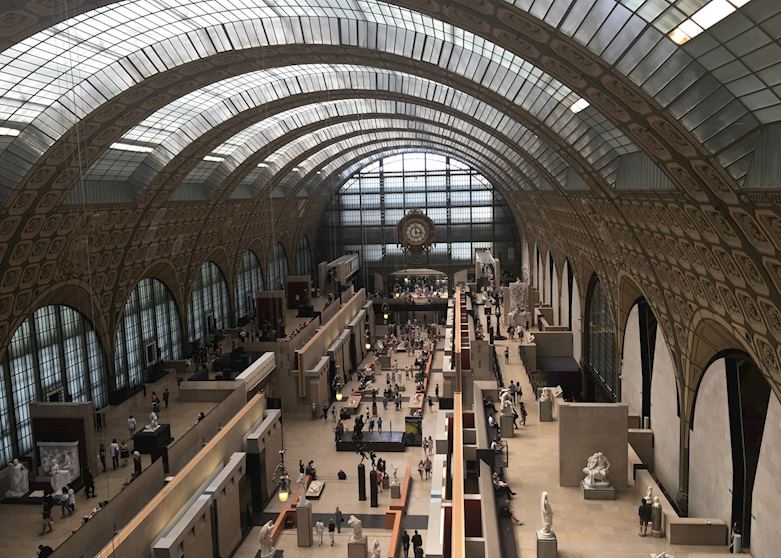 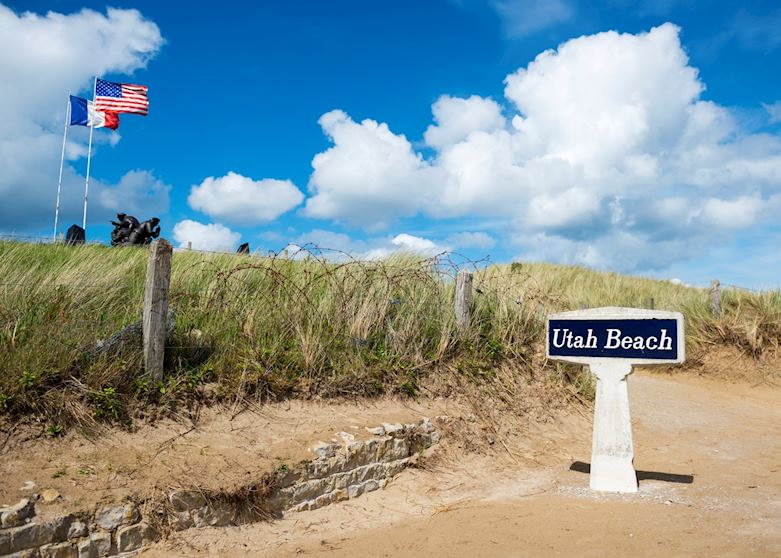 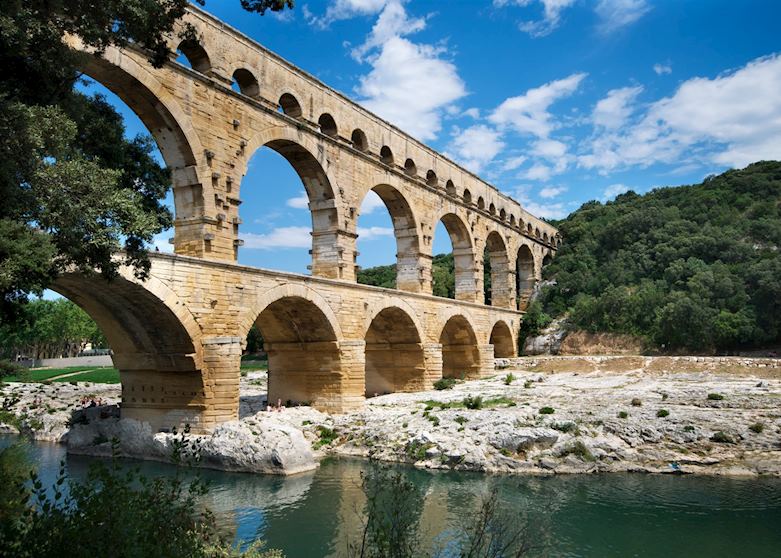 Monuments and museums of Paris Food highlights of France