Greece means different things to different people. For some, it’s beaches, boat trips and islands. But for me, it’s about the fact that this was the cradle of Western culture and the starting point for a continuous thread of history that spans millennia.

Athens’ many museums trace that thread from the earliest days of Cycladic art through the dynamic bronzes of the Golden Age to the glittering mosaics of the Byzantine Empire. If, like me, you’re compelled by Greece’s role in European art and architecture, then I suggest spending at least four full days in Athens to explore these five museums.

The sheer scope of Greece’s history is mind boggling and the National Archaeological Museum is the best place to get a good overview. The exhibits here depict the sweep of centuries from the Neolithic to the Classical and Late Roman periods.

The museum is a grand villa with yellow walls, soaring marble columns and four enormous statues perched on the high roofline. Inside, the galleries are vast and often busy with cruise ship crowds. We’ll try to plan your visit around the ships’ schedules, but regardless, I suggest planning your visit early in the morning or in the late afternoon.

As you might imagine from a collection of 11,000 items that spans millennia, a private guide is imperative. Not only can they provide the context you need to understand what you’re looking at, they can help steer you towards the items that catch your interest, whether that’s Archaic-period sculpture, Golden Age vases or glittering gold Mycenaean ornamental pieces. Additionally, the museum is a bit loud and the rooms echo, so a private guide is easier to hear.

A list of just the most significant pieces would be enormous but one of the best known is the Artemision Bronze, a striding statue that depicts either Zeus or Poseidon, depending on who you ask.

Few bronzes survive from the Classical period — they were often melted down for their metal — but this one was preserved beneath the waves in a shipwreck. We’re lucky to have it because it perfectly embodies the style of the period.

The god’s body is exquisitely balanced, with an emphasis on the long strong limbs that represent ancient Greek ideas about the perfect human form and the Golden Mean. The imposing, dynamic pose, about to hurl a lightning bolt or trident, draws my eye every time I see it.

It also represents a dramatic evolution from the stiff, rigid limbs of the Archaic period, which you’ll see in the kourus (boy) statues from that period. That same evolution was recreated centuries later, when art moved from two-dimensional representation in the Middle Ages to illusionary naturalism during the Renaissance.

Other significant pieces include Mask of Agamemnon, a golden death mask that dates from about 1550–1500 BC. (The poetical name is inaccurate since it predates the Trojan War by centuries). Be sure to look for the small holes under the ears, intended for the string that held the mask onto the face of the deceased. You can also see a large Ptolemaic Egyptian collection and restored frescoes from the excavation at Akrotiri on Santorini.

Visit the matriarchy at the Museum of Cycladic Art

For many people, Cycladic art is a revelation on many levels. The clean white marble and minimalistic, almost abstract lines could easily feature in a Guggenheim gallery, rather than from a culture that thrived from 3000 BC to 2000 BC. What’s more, the predominance of pregnant women motifs implies that the society on the Cycladic Islands during this period was matriarchal.

The National Archaeological Museum does have a good-sized collection of Cycladic art, but there are other things to see there. Instead, I suggest visiting the Museum of Cycladic Art. Set in a century-old mansion in a residential area, this is an intimate museum with few visitors.

The bottom floor focuses primarily on the female idols, which are all very similar. You’ll see just the suggestion of features on the elongated faces over the stiff, minimalist bodies — arms are folded above the slight curve of a pregnant belly, legs are straight and perfectly aligned. It’s a primal figure and I find it compelling enough that I keep a reproduction sitting my desk at work. The displays include everything from small, palm-sized versions to one that’s almost life-sized.

A guide is useful here, since most people who haven’t studied archaeology or early art history don’t know much about the Cycladic culture. (Though, to be honest, there are no surviving written records, so no one knows much.) If you have a high tolerance for museum fatigue, you can see this right after the Archaeological Museum for an interesting contrast, but you might also want to save it for a separate day.

The jewel in the crown: the Acropolis Museum

Even more than the Archeological Museum, the Acropolis Museum is the jewel of Athens’ crown. Located at the foot of the Acropolis, its light-filled galleries showcase the surviving treasures from the Parthenon and associated temples.

I strongly suggest seeing this and the Parthenon together, one right after the other — the museum was intended to be seen in conjunction with the site and the pair together make a remarkable tour. (I also plan to spend the rest of the day doing something much more relaxed — the crowds at both locations can be a bit overwhelming.)

Built in 2009, this is a gleaming glass-and-concrete museum that houses almost 4,000 items, from the remaining original friezes to votive offerings to Athena and even the four of the five surviving caryatids (female figures that support a structure). The construction uncovered an ancient Athenian district, which has been preserved under glass for visitors to see as they enter.

There is much to see, but if you have limited time, be sure to leave the bulk of it for the extraordinary top floor, known as the Parthenon Gallery.

Offset from the rest of the building’s footprint, the atrium perfectly replicates the alignment of the Parthenon and provides a glorious setting in which to examine the temple’s friezes. You can stroll along the pieces, examining them at much closer range than the ancient Athenians once did — these were intended for the goddess’s eyes, not her worshippers, and were located at the very tops of the columns.

The floor-to-ceiling windows flood the room with sunlight, picking out the detail wrought into the honey-toned marble. The stark-white pieces, interspersed with the original marble, are replicas of the Parthenon Marble, looted from the site in 1801 by Lord Elgin. The whole gallery was intended to be a suitable display space should the British Museum bend to constant requests from Greece and return the originals.

Frescoes and mosaics at the Byzantine & Christian Museum

Set in an elegant Florentine-style villa, the Byzantine and Christian Museum examines Greece’s evolution from ancient polytheism to Christian traditions. Located just a three-minute walk from the Museum of Cycladic Art, the museum is small, often quiet and worth a stop if you’re interested in the post-classical world of Greece.

Arranged chronologically, the exhibits chart the period from the 3rd century AD, when Constantine became the first Roman emperor to convert to Christianity, to the 20th century. The earliest exhibits focus on small, everyday items that individuals could afford to own, like pots and charms for necklaces.

Once Christianity gained strength, many of the classical temples, including the Parthenon in the 5th century, were converted into churches and basilicas and you can see mosaics and carvings from these buildings.

The rest of the exhibits include Gutenberg bibles, original vestments, delicate frescoes and a staggering collection of icons (paintings of saints and the holy family, usually done on wood).

Folk art and icons at the Benaki Museum of Greek Culture

Based on the private collection of a wealthy merchant named Antonis Benakis, the Benaki Museum is eclectic and wide-ranging, with exhibits that span the centuries from the Bronze Age until World War II. It’s smaller and necessarily less comprehensive than any of the others that I’ve mentioned, but each item was chosen by someone with a master’s eye. Set in the family’s neoclassical mansion, it’s deliberately intimate and much less crowded than its better-known counterparts.

One of the highlights is the extensive collection of regional Greek folk costumes. The many-layered outfits are densely embroidered, often with glittering gold thread, and richly dyed in deep red and dark blue, with occasional splashes of yellow or orange.

You can also see two re-created sitting rooms from 18th-century Greek mansions and a large display of Byzantine icons, though they were collected for their beauty rather than as a complete representation of the many different styles that flourished during the 1,000-year empire. And the rooftop cafe offers views over the city and the national garden.

Read more about trips to Greece 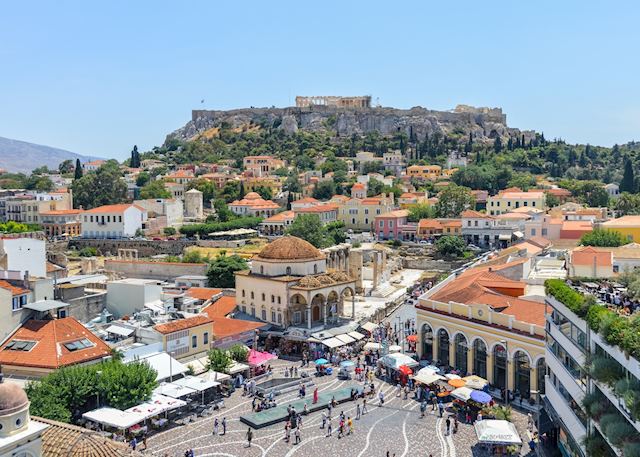