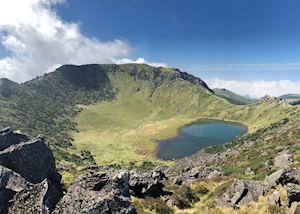 The island’s hotels are clustered in three areas: Jeju city, its biggest urban hub which is on the north coast; Seogwipo city, a more secluded spot on the south coast; and the Jungmun resort area which has large, family-friendly hotels and access to some of the best beaches on the island with good snorkeling and swimming.