Vast, empty and Arctic, Lapland has a near-mythical quality. This enormous swathe of northern Sweden seems to embody the very spirit of winter — home to huge herds of reindeer and seemingly endless frosted pine forests, as well as the dancing northern lights and a snow-dazzled landscape where the Snow Queen might raise up a mighty ice palace.

But, don’t discount a visit during the summer, which has its own draw. You can roam among the pine-clad mountains and raging rivers by the light of the midnight sun, go foraging with the Sámi population and hike through nature reserves that boast some of the richest wildlife left in Europe.

For all its remoteness, the region is easy to reach thanks to a network of local airports, and we can help you explore this last, still-wild corner of the continent. Unsurprisingly, the population of this fragile, pristine area is deeply committed to ecologically sustainable practices. The region’s also home to some of Sweden’s most interesting and innovative ecolodges.

Things to see and do in Swedish Lapland

The Sámi have lived in Lapland since prehistoric times and their way of life is remarkably unaffected by the passage of millennia. Many still make a living herding reindeer. Their culture and language are deeply entwined with the land they call Sápmi, a region that stretches over Norway, Sweden, Finland and the Kola Peninsula in Russia. There are more than 300 words for snow in the Northern Sámi language, for example, and eight seasons in the year.

We can arrange for you to learn more about this resilient people by meeting guides and exploring the wilderness with them. You’ll hike through mountains and learn their Sámi names, meet the reindeer herds, go fishing in lakes and forage for wild cloudberries, as well as cook a traditional meal.

Visiting Lapland is like catching a glimpse of primordial Northern Europe. Wide-antlered elk and reindeer roam through slender birches, grazing placidly on cloudberries and deep-green moss. Brown bears lumber alongside mirror-like lakes and russet foxes dart through stands of wildflowers. Sweden’s largest and oldest national parks are located here and offer some of the most pristine hiking on the continent.

If you’d like to explore this rich wilderness, we can arrange a wide variety of activities that will help you learn more about Lapland. Take guided hikes, go fly-fishing in rushing rivers, mountain bike down snow-gentled slopes or kayak across placid lakes.

The northern lights and the midnight sun

Thanks to its northerly latitudes, Lapland is one of the best places to enjoy the northern lights. Abisko National Park’s Aurora Sky Station offers a comfortable base for glimpsing the elusive cosmic light show. It’s located 250 km (155 miles) north of the Arctic Circle and has virtually no light pollution. There’s a warm café where you can wait for the phenomenon to occur, and a chairlift and watch tower for the best views. To truly indulge in the Arctic atmosphere, we can also arrange for a dinner on the ice under the strobing sky.

It’s also an excellent base for visiting in June. You can hike under a sky that’s glowing gold and red, lit by a sun that hovers on the horizon all night but never dips.

In this land of ice and snow, the options for winter sports are seemingly endless. For the souls who love winter sports, we can arrange for a wide array of outdoor activities that take advantage of the deep freeze. You might try your hand at dog-sledding, skimming through the countryside pulled by a team of trained huskies, or embrace modern convenience with a chance to explore by snowmobile. Ice fishing has long been an important source of food for the Sámi and you can have a go yourself at this meditative sport.

The deep freeze also means you can visit the ICEHOTEL Winter, a structure made entirely from ice and snow. Rebuilt every winter for the past three decades, it’s an ever-changing exhibition of art and hospitality in the far frozen north.

Sweden’s Lapland is known for its abundance of local foods, many wild-caught or foraged. The culinary culture is greatly influenced by Sámi foodways, with a focus on reindeer, moose, fish and roe, wild mushrooms and berries, and cheese. Despite its sparse population, the area boasts a number of exceptional restaurants that serve Lapland cuisine, especially in cities like Luleå, Kiruna and Umeå, and boutique hotels like Treehotel.

If you’d like to get really hands-on with your food, consider a foraging walk with a Sámi guide. You’ll gather ingredients as you walk, learning more about the traditional ways that the Sámi still eat, before helping to prepare a meal to share.

With four wildly different seasons, Lapland is a year-round destination, depending on what you’d like to do. The northern lights are at their peak November to March. Snow falls as early as August, but the best time to experience winter sports is between December and March.

Hiking enthusiasts can count the long days and twilight nights of the midnight sun, which begin in late May and end in mid-July. The mountain hiking season typically lasts from June through to September, although this is slightly longer in Abisko National Park.

August, September and early October are often overlooked by visitors, but the changing foliage makes it a lovely time to visit.

Our itineraries will give you suggestions for what is possible when you travel in Swedish Lapland, and they showcase routes we know work particularly well. Treat them as inspiration, because your trip will be created uniquely by one of our specialists.

We’ve selected a range of accommodation options for when you visit Swedish Lapland. Our choices usually come recommended for their character, facilities and service or location. Our specialists always aim to suggest properties that match your preferences.

Our specialists seek out authentic ways to get to know the places that could feature in your trip. These activities reflect some of the experiences they've most enjoyed while visiting Swedish Lapland, and which use the best local guides. 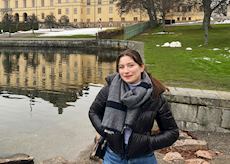