It was with great anticipation at the prospect of new experiences that I boarded a flight to Vietnam. It was to be my ninth time back to Vietnam but this time, my mandate was to inquire about, unearth, experience and enthuse on all that is new and innovative in the country.

Vietnam has been a wonderful destination to us at Audley Travel, being the primary destination that our Founder Craig Burkinshaw chose to lead tours to in 1996. Some 17 years later it is contrived to say much has changed, given the scale of growth and economic prosperity enjoyed throughout the region in that time. However, Vietnam has benefited tangibly and more so than some of her neighbors, thanks to relaxed international trading regulations.

While I appreciate that all of the above may be cause for groans and angst from the traveler seeking ‘paradise lost’, dusty tracks and homestay living, it is in this context that Vietnam’s traveling experiences have broadened considerably also. More money, relaxed Government stances on foreign investment and a genuine desire to spread the wealth via sustainable, community-based tourism underpinned much of what I was about to indulge in.

Hoi An, considered the 'jewel' in Vietnam's tourism crown, was to play host to two such new experiences. While Hoi An remains charming and beautiful in a quaint village kind of a way — the pretty fishing village is UNESCO protected — it is very popular and popularity brings its own problems.

The following day I was to experience a day's farming, as part of a new agri-tourism project based in the countryside that skirts Hoi An. I was more than happy to participate — on the promise of rice pancakes and a gentle bike ride, we set off into the countryside in search of our small farming community.

We were ushered into the farmer's kitchen for a cup of tea and a brief face-pulling session with the small army of children that the farmer’s wife cares for, while the other villagers are at work. My guide outlined the mornings activities and no sooner than my cup of tea was finished, I was swiftly adorned with ubiquitous conical hat, farming smock and waders. I was soon to become closely acquainted with that half acre of mud!

The next three hours were a blur of laughter, buffalo plowing, buffalo riding, laughter again, planting and harvesting rice, grain sifting, more laughter, fish trapping (the biggest chuckle coming from the farmers as I kept dropping the slippery little critters — catch and release, no fish were harmed in the making of this activity) rice grinding to produce rice milk and then finally — cooking and eating rice pancakes.

I learned about one of the longest standing farming techniques in the world, gained an understanding of the pitiful wages generated and controlled by the Government for rice farmers (roughly $300 a year), laughed hard and made friends with two strangers and ate the most delicious, well-earned Vietnamese feast. I will certainly never look at a grain of rice in the same way again. One of the most inclusive and enjoyable experiences this traveler has enjoyed anywhere in the world.

Next I traveled to the new city of Ho Chi Minh City. ‘New’ in that much of Ho Chi Minh City has been rebuilt since the war and more city expansion plans are afoot on the eastern banks of the Saigon River, that runs through the heart of the city. It's fair to say that the ‘secret alleys’ trip that I did in Ho Chi Minh City was a more somer experience than the rice growing day in Hoi An, but no less interesting for it. The day started early (for me, standard for Vietnamese) at 6am where I was met by my ever-cheery guide.

After 15 minutes of traffic weaving and narrowing streets we stopped, got out and looked at… nothing. That’s because I had been taken to a very local, very hidden, fresh, daily market down a number of alleyways and tight lanes. From the main road and it was almost impossible to notice anything discernibly resembling a market. I have visited a myriad of markets traveling and they can slightly start to lose my interest, but this one was different because I was the only Western, fair skinned, blue-eyed, camera-wielding traveler on the plot. I had in fact become their attraction!

A thousand eyes, hundreds of smiles and the odd hand absorbed my presence and I loved it. Fish being gutted, vegetables being washed, commuters picking up breakfast, housewives engaged in their daily barter, all great scenes in abundance as we muddled our way along the tight alleys.

Sat on small plastic stools, marveling at the locals drinking beer (at 9am!) we sipped on strong, sweet and gluey Vietnamese coffee and plotted the second stage of the morning tour. We were to visit a secret ammunition house that had been covertly used by the Viet Cong during the Vietnam War. The house is not open to the public on a permanent basis, so a call to the curator was made and a time was agreed where he would come and open the house up for us.

The curator; a former officer serving with the commandos who occupied it, let us into (on the surface of things) what looked like any other Vietnamese home. Skinny, tall and rather bland at first glance. However, as the curator started talking, with my guide translating, the ground floor started to come to life in my mind with images of spies pretending to be a family of tailors. Going about their business.

The market and secret weapons house was fascinating, moving, mysterious and hugely enjoyable — a great way to start a day’s excursions in Ho Chi Minh City. Mind how you go with the coffee and fortune-tellers though! 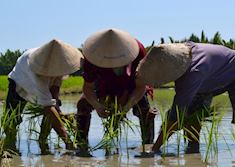 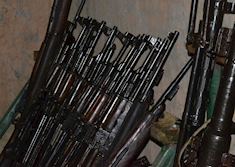 This tour of Ho Chi Minh City’s alleys will give you an authentic insight into the daily lives of those that reside and work in this particular district of the city. It finishes at a previously covert location that was used during the war to store weapons.