What to do in Cambodia: our highlights guide

Angkor Wat remains the biggest pin in the map for most travelers to Cambodia. Of all the temples of Angkor, it's the focal point but just one of over 1,000 temples spread across some 154 sq miles.

At the times of day when Angkor Wat buckles under the footfall of visitors, other temples – such as the delicately carved Banteay Srei – are near-deserted. And, as well as being peppered with ancient temples, Cambodia is skirted by white sandy beaches and swathed in pristine jungle.

Yet, for me, it's the Cambodians themselves that leave the biggest impression on you. They’re exceptionally hospitable, and post the despotic reign of Pol Pot’s Khmer Rouge in the 1970s, gladly welcome visitors.

The roofs of the National Museum

Of the many markets in Phnom Penh, the Russian Market – so called because in the 1980s it was only the Russians who came to Cambodia – is the best. Its warren of alleyways overflows with stalls selling everything from CDs to woodcarving, Buddhist religious paraphernalia to ‘sampots’ (the local sarong) in every conceivable color.

The Foreign Correspondents’ Club, or FCC, is open to all and is a very busy colonial-style hotel, bar and restaurant, with ceiling fans and wooden roller blinds. Its large terrace bar overlooks the Mekong and is very popular for sundowners. The river from here is memorable, but I tell people to turn 180 degrees to face the better view of the delicate silhouette of the National Museum’s many roofs.

The city’s architecture is beguilingly varied: from grand French colonial to intricate Buddhist. We can arrange a tour led by an architect graduate of the striking Vann Molyvann (a disciple of Le Corbusier) buildings that dot the city.

It’s easy to visit Phnom Penh and be unaware of the Khmer Rouge atrocities, but a visit to the Killing Fields (where the regime executed over a million of its citizens) and the Tuol Sleng former prison, reveal the regime’s extraordinary depravity.

Just 18 km from Phnom Penh is Kien Svay, a place I’d strongly recommend visiting to experience a slice of daily life, as locals escape the city at the weekend.

It’s a riverside picnic area, which despite its proximity to the city sees few foreign visitors.

There are bamboo huts by the river in which to picnic, and a small market selling fresh produce for anyone arriving without their own food. The atmosphere is delightfully convivial; so don't be surprised if locals practise their English on you.

Explore Angkor Wat and the temples of Angkor

Built between the 9th and 15th centuries, Angkor Wat is the largest religious building on the planet still in use. Overgrown and largely forgotten, it was ‘discovered’ by Frenchman Henri Mouhot in 1860.

The temples of Angkor are a representation of the God’s abode and capital of the ancient Khmer Empire, and they are exactly everyone’s idea of what an ancient jungle temple should look like.

Siem Reap is the surprisingly lively tourist town just a few kilometres from the entrance to the temples, and with visitor numbers growing each year, getting the most from your visit involves some planning.

Experience one of Angkor's smaller temples

As one of the smaller temples of the Angkor complex, Banteay Srei isn’t grand in scale, rather its beauty is in the sharpness and detail of the carvings that smother almost all of its surfaces.

Banteay Srei translates as ‘citadel of women’ (hence its smaller and more delicate form) and the intricate carvings depict Apsara dancers, women carrying lotus flowers and scenes from the Hindu epic tale of the Ramayana.

Banteay Srei is 40 km from Siem Reap, surrounded by the jungle, and I’d say a great option for anyone who wants to venture away from Angkor’s main temple complex.

Combining a visit here with Ta Prohm, another temple, captures the best of each. Begin early in the morning at Ta Prohm before you head out into the Phnom Kulen National Park – where you’ll have a waterfall almost to yourself, and lunch sitting by it. The tour loops back to Banteay Srei to catch the temple at its deserted best, in the late afternoon when the red sandstone flushes pink in the dipping sun.

Battambang makes a good stopping point for anyone who prefers not to fly between Phnom Penh and Siem Reap, the closest town to Angkor.

A former French colonial town on the sinewy Sangker River, it became a Khmer Rouge stronghold in the 70s and has yet to recover its vim.

Therein lies its charm, and with little traffic and no hills, riding past its dilapidated colonial-era villas and occasional temple ruin on a bicycle is a good way to experience the city.

Visit elephant conservation in the hills

Elephants at the ELIE project, Mondulkiri

In the lush and remote hills of Sen Monorom, a six-hour drive from Phnom Penh, there’s an excellent conservation project called the Elephant Livelihood Initiative Environment, or ELIE.

It rescues Cambodian domestic elephants from lives of work and abuse and encourages the indigenous Bunong people to protect wild elephants.

You can stay for a few days and enjoy time with the animals — including visiting a nearby waterhole where you’ll get to know some of the herd and help the mahouts wash their elephants.

This is very much an education, rather than the usual traveling experience of just riding the animals.

This startling temple contains over 11,000 carved figures and 216 stone carved faces. The symmetry and dense jungle setting are what makes this in my eyes one of Angkor’s most impressive temples. And, it’s now thought that all of the likenesses are of the extremely vain King Jayavarman VII.

The Bayon bass reliefs include massed figures in a naval battle scene, a military procession, and a victory parade. There’s also a section showing a circus coming to town, complete with a strongman and tightrope walkers.

Bayon is another contender for a dawn viewing, as it's off most people’s radar and away from Angkor Wat itself, but it’s impressive at any time of the day.

Stay floating on the river in the Cardamom Mountains

Nothing can quite prepare you for the 4 Rivers Floating Lodge, built on a river deep in the Cardamom Mountains. Despite the remote and unspoilt location, you’re well looked after and sleep in one of 12 safari-style tents on floating pontoons.

Arriving involves some effort, but it’s well worth the four-hour drive from Phnom Penh and 30-minute boat ride.

Swimming in the slow-flowing river from the private landing stage in front of my tent still stands out. One late afternoon I swam in a torrential downpour and then fished with a simple rod and hook while the water reflected the pink skies.

Cambodians live alongside Vietnamese on the ‘floating villages’ of Tonle Sap, the largest freshwater lake in Southeast Asia. It’s an important bird-watching area - with several rare species to look out for – but my highlight is exploring the communities that have settled on the lake.

The ‘floating villages’ are built on stilts, but appear to be floating when the lake is deepest – between July and February. With a longtail boat you can visit several of them, to see the curious sight of ‘floating’ post offices, chemists and restaurants.

Tonle Sap is distinguished from other lakes as the water flowing out reverses direction when there is heavy snowmelt from the Himalayas. This phenomenon bloats the lake to almost six times its dry-season size.

The best time for bird-watching is in the dry season from March to June, and the Prek Toal Biosphere is the place to head for.

The villages are less photogenic at this time of year, being marooned on the dry lakebed, but you’ll have a better chance of seeing water birds like the spot-billed pelican, lesser adjutant and black headed ibis.

Some of the species of storks and cranes, especially the sarus crane, are depicted on bass reliefs at the Angkor temples.

Relax on the coast

An ideal place to kick back and relax at the end of a trip is the small coastal town of Kep. Once the preserve of French colonial rulers, and latterly the Cambodian elite, few foreign visitors come here, yet it has charming faded villas, good seafood markets and the white-sand beaches on Rabbit Island.

Apart from watching the locals going about their daily lives on the little main street, for something a little different you should pay an early morning visit to the crab market and pick up some ingredients for lunch. Then get a local to ferry you in a boat to Rabbit Island.

It would only take 40 minutes to walk around the island, but I’d say opt to relax on the beach, get a local chef in one of the huts to prepare the seafood for you, and then picnic looking out to sea.

Welcome the dawn at Ta Phrom

Many travelers make a beeline for sunrise at Angkor Wat, but if you were to choose only one temple sunrise experience, I’d strongly recommend heading to Ta Phrom instead.

The temple stands out from others as it’s been left in the state in which it was found, with giant creeper tree roots entwined with the masonry.

With luck, you may even have daybreak here to yourself when the dawn mist clears and darkness fades to reveal the atmospheric tangle.

It’s an early start – arriving at the park by about 5:45am, but you’ll be back at your hotel in time for breakfast.

Plan your trip to Cambodia 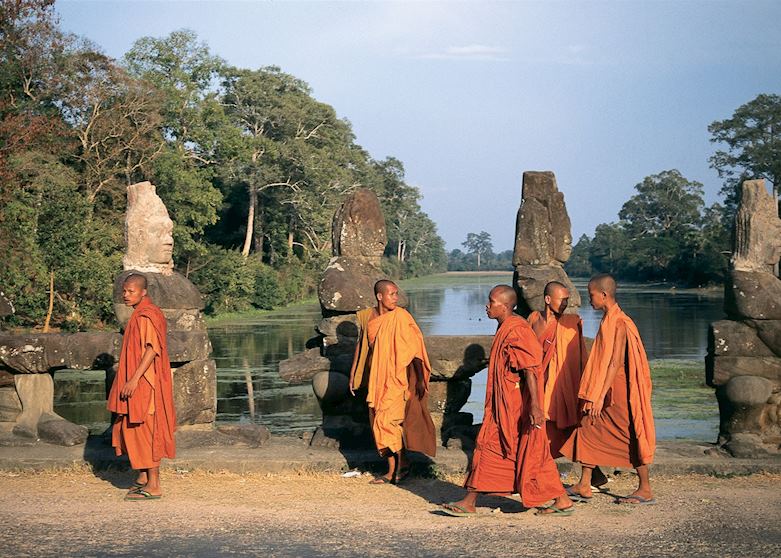 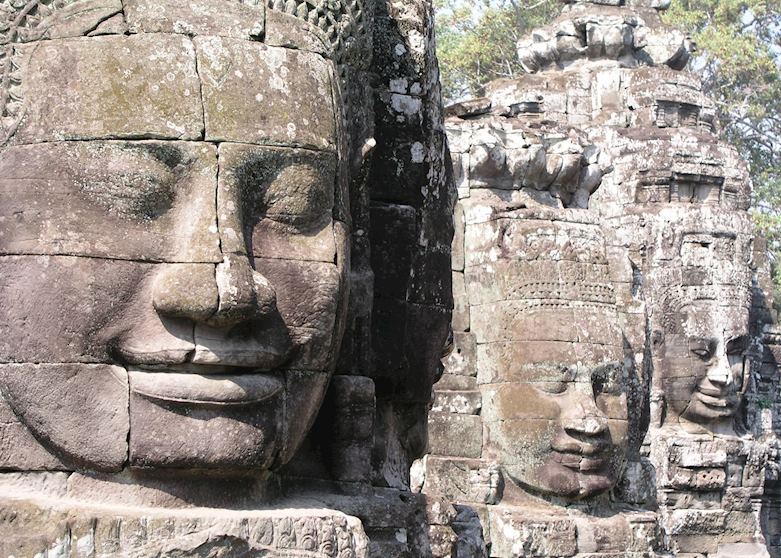 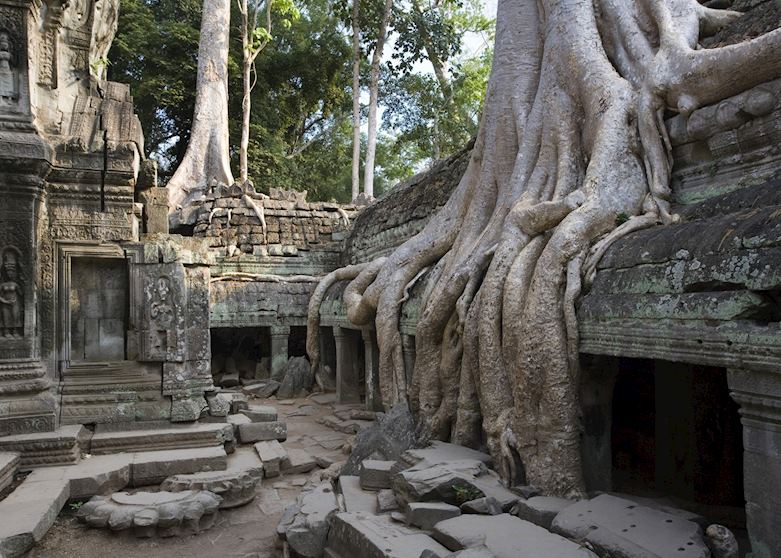