Tang-era Buddhist art, camel rides on golden dunes, and the westernmost outpost of the Great Wall, all in the Gobi Desert

Sweeping, sere, and filled with shifting golden sands, the Gobi’s trackless depths are some of the most forbidding on the planet. The desert, which stretches across both China and Mongolia, was one of the most daunting legs of the Silk Route and still remains opaque to casual visitors.

However, modern high-speed trains have made the journey quick and easy, and knowledgeable guides can unlock this vast and enigmatic region, allowing you to glimpse the remnants of the merchants, caravans, cultures, and empires that once thrived here. You can see caves packed with Tang-era Buddhist art, climb up the pagoda-roofed fortress that guarded the western edge of China’s empire, and soak in the sun-baked dunes and distant horizons of the desert landscape itself.

Things to see and do in the Gobi Desert

Jiayuguan Fort and the Great Wall

When you visit Jiayuguan, you’re standing on the eastern edge of the Gobi and the westernmost outpost of the Chinese empire. The main sight for you to visit here is Jiayuguan Fort, a forbidding fortress that cuts an arresting silhouette with its three-tiered pagoda roof standing sentinel over a faceless wall and gate. Known as the ‘Impregnable Defile Under Heaven’ when it was first built in the early 1300s, it guards the narrow pass through the surrounding snow-kissed mountains.

Nearby, you can climb atop a watchtower of the Great Wall that dates from two centuries later. The wall itself was reconstructed in the 1980s (with slightly unfortunate results), but the view of the rolling desert and distant mountains is worth the 55-step climb.

As you head west through China, the arid mountains seem full of ‘1,000 Buddha Caves’, but if you have limited time, we suggest the ones located just outside the remote oasis town of Dunhuang. Also known as the Mogao Grottoes, this massive complex of almost 500 caves houses one of the most important collections of Buddhist art in the world.

With your guide, you’ll get to explore a seemingly endless array of Buddhas and bodhisattvas — huge, small, sitting, reclining, painted, and carved. You’ll also learn about the Tang dynasty, when the caves were home to 18 monasteries. The earliest artwork shows evidence of traditional Indian styles and techniques, with central stupas and slim figures, while later pieces reveal Tang and Tibetan influences.

Play in the sand

With its sweeping expanse of soft, shifting dunes, the Gobi is a massive playground where you can indulge in all sorts of desert fun. Tear around in a fat-wheeled dune buggy, kicking up huge rooster-tail plumes of sand. Mount a camel and imagine you’re a 14th-century trader heading out on a caravan to make your fortune. Or, just take off your shoes and slip-slide down the steep slopes.

The autumn month of September is probably the best time to visit the Gobi. Temperatures are still warm, but have fallen dramatically, making travel more comfortable. It’s also usually before snow falls in Kyrgyzstan's high passes, making it an excellent time to visit if you want to include the desert as part of a larger Silk Route adventure. 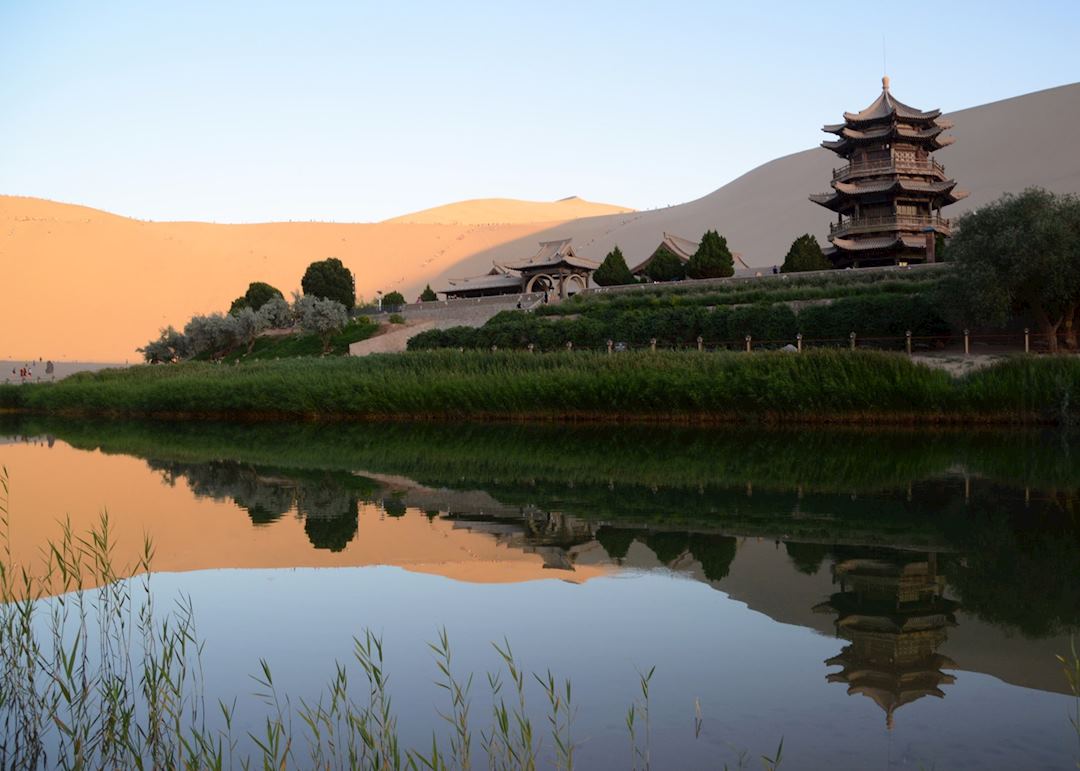 Start planning your trip to The Gobi Desert

Map of the Gobi Desert

Our expert guides to exploring the Gobi Desert

Written by our specialists from their own experiences of visiting the Gobi Desert, these guides will help you make the most of your time there. We share both our practical recommendations and the best ways to appreciate the Gobi Desert at its best.