China’s sheer otherness — its size, politics, language, culture, food and tumultuous modern history — can intimidate. At the very least, it can seem like a destination to approach with caution, somewhere you really need to do your homework on. But — while we’d always encourage you to learn a few words of the local tongue and read up on where you’re planning to visit — China needn’t be foreboding for first-time visitors. We’ve enlisted our specialist Cheryl to debunk common preconceptions, and answer very plainly some of the most commonly asked questions about travel in China.

Q: I’ve heard public bathrooms are a force to be reckoned with in China…

A: Ah, you’re thinking of squat toilets. Like many places in Asia, these are common in China (and they’re actually healthier, in several ways, for the body. For example, they’re more hygienic, as you’re not coming into physical contact with a seat that has been used by others.) But, increasingly, you’ll find Western throne-style toilets almost everywhere — including on the high-speed trains. Tip: the type of toilet is sometimes depicted on the cubicle door, and it’s a good idea to bring your own toilet paper.

There’s only one bathroom-related ‘hack’ to be aware of as a first-timer. Unless you’re very comfortable with sharing your personal space, I’d avoid the public bathrooms in Beijing’s hutongs (they’re communal squat toilets with no dividing cubicles).

Q: I’ve heard that China’s cities are quite dirty: what can I expect?

A: Don’t believe everything you hear: streets are swept and there’s not really a culture of littering. In fact, China’s cities are dotted with manicured parks and green spaces.

In the northern cities — and especially during their winter months — you'll see people wearing face masks to help combat the effects of pollution, which is often worse in these areas of the country, and at this time of year. The Chinese may also wear face masks if they have a cold: they're trying to avoid spreading germs.

China has, admittedly, developed a bit of a bad rep for people spitting in the street, but this has been clamped down on. While we can’t promise that you won’t see (or hear) it, in reality it’s a dying habit.

Q: What’s the public transport like? Is it chaotic?

A: Not at all. China prides itself on an efficient, clean and increasingly high-tech public transport service. The high-speed intercity trains, for example, are a dream to travel on, while the subway systems in Beijing, Shanghai and Hong Kong are convenient and user-friendly. On both the subway and intercity trains, you’ll always have to put your belongings through an airport-style scanner before going down to the tracks.

It’s also worth pointing out that lots of other aspects of life in China are refreshingly straightforward. In the cities, you’ll find ATMs everywhere, and it’s easy to change currency. Credit cards, however, are less commonly used: always carry cash.

Q: I’m worried about the food. Is it like Chinese food in Europe and the US?

A: No — but in a good way. It’s much, much better. Ingredients are ultra-fresh, tastes more subtle and complex. And, the diversity is staggering: most of the Chinese food you find in the West is derived from the Cantonese school of cooking (such as sweet and sour dishes, and dim sum). In China, you’re exposed to a whole gamut of regional cuisines, from fragrantly spiced Sichuan dishes to Shanghainese xiaolongbao (soup dumplings) containing a rich, meaty broth.

Now, I’d be lying if I said China doesn’t have dishes which, to Western eyes, can seem very discombobulating. Offal of all kinds, for example, is widely eaten. While there’s plenty of scope to be extremely adventurous (scorpions on a stick, anyone?), there are also lots of everyday dishes that are scrumptious and ubiquitous. Alongside more outlandish fare, you’ll find a huge range of dumplings, noodles, soups, hotpots, succulent braised and barbecued meats, fish stews, tofu and bean curd, and plates of steamed or lightly stir-fried vegetables.

Try to stay as open-minded as you can, and ask your guide for recommendations on where’s good and what’s fresh. Don’t discount humble-looking hole-in-the-wall or ‘working man’s’ restaurants, food courts (which are light years ahead of Western ones) or street-food vendors. Personally, I have a real weak spot for jianbing — Beijing pancakes, cooked right in front of you on a street-side hotplate and stuffed with a variety of fillings.

One of the best ways to experiment and stretch your palate is on a food tour with a bilingual guide. I think these tours are brilliant, as they allow you to sample a range of new dishes without having to commit to a plateful in a restaurant. There are options throughout the country, from Chengdu to Shanghai. Ask your specialist to recommend their preferred tour.

Bear in mind, too, if you’re interested in trying new foods but not too much of any one thing, that it’s customary in China to order several dishes and share them.

Wine is generally more expensive than beer, but it’s becoming more popular. The Chinese will often drink hot (boiled) water alongside their meal. Tea — and the whole culture of tea drinking — is a pleasure to be relished.

Q: I really can’t use chopsticks. Am I doomed?

A: Not at all. Ideally, try to get some practice in before you go (and don’t be surprised if you develop cramp in your hand at first, it usually means you’re holding them properly). Even if you think you’ve nailed your technique, well-meaning locals might genially correct your grip. Watch, listen and learn... and, if all else fails, there’s usually cutlery on offer.

You might even find yourself preferring chopsticks by the end of your trip. As Carlyle (a young Beijinger who runs cooking classes in the capital) once explained to me, chopsticks came into use because they’re a sign of peace and neutrality. At mealtimes, soldiers would customarily lay weapons aside. Carlyle even commented that, to Chinese eyes, knives and forks seem a little aggressive-looking.

Q: I’m terrified of committing some faux pas around manners. How can I prepare?

A: In a word: relax. The Chinese are a very laid-back people. Theirs isn’t a society governed by strict etiquette (this is more a feature of Japan), and you’re extremely unlikely to offend anyone, ever. I particularly love the fact that ‘slurping’ noodles is considered a compliment to the chef.

If you’re dining at someone’s home (which we can arrange for you), the usual good manners apply (and, a little Mandarin goes a long way). But, you certainly won’t be expected to eat everything that’s put in front of you. It’s customary for hosts to show their generosity by serving you much more than you could ever (healthily) eat. It’s polite to accept alcohol, if it’s offered — but no one will be remotely bothered if you decline.

If you’re spending time in more rural provinces, you’re likely to attract attention as a Westerner: expect stares, and to have your photograph taken. This works both ways, though. Many Chinese are at best delighted and flattered, at worst indifferent to having their photograph taken (though we always recommend asking first).

It’s a travel cliché, I know, but the Chinese are genuinely some of the friendliest people I’ve met. They’re also deeply generous and welcoming. Don’t be surprised if you’re invited into people’s homes or to take part in communal dances in a local park (no one cares if you don’t know the steps).

Q: What about everyday dress codes in China?

A: Despite seeming a conservative society (you won’t, for example, see many public displays of affection, even between young couples), there’s no need for you to dress conservatively (though again, if visiting temples or spiritual sites, common sense applies). Shorts, T-shirts, vest tops and sandals are acceptable everyday wear.

Q: Are you conscious of being in a Communist country?

A: This is a funny one. In major cities, the signs aren’t always obvious, give or take the odd propaganda display in bookshops or statues of Marxist figures. In the countryside, Western influences diminish, and you might come across propaganda murals depicting Mao. And, Buddhist temples aside, religion isn’t really visible in day-to-day life, unsurprisingly.

For Westerners, perhaps the most blatant reminder of China’s politics is Internet censorship. Although everyone uses smartphones, many Western sites (including social media networks and apps) are blocked by what’s sometimes cunningly referred to as the ‘Great Firewall of China’. There’s no legal way around this — and, in fact, it can even be a nice excuse to have a bit of a digital detox. 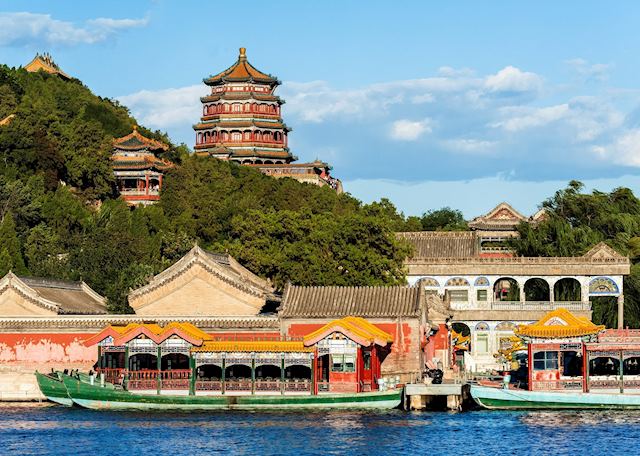