A highlights guide to Croatia

Stretched along the Adriatic, Croatia boasts thousands of rugged limestone islands and seemingly endless miles of pebbled coast, all lapped by the crystal-clear cerulean sea. However, there’s more to this Balkan destination than just beachy pleasures. You’ll also find historic cities, unspoiled national parks and a cuisine that takes advantage of the Mediterranean climate.

It’s a hugely diverse country and you could easily return several times to explore just the Dalmatian Coast or to delve deeply into the country’s culture. But for the first-time visitor, I suggest these five highlights.

The city walls of Dubrovnik

One of the best-preserved medieval walled cities in Europe, Dubrovnik was Croatia’s biggest draw even before Game of Thrones decided to film scenes from King’s Landing here. Since then, it’s been one of the most popular cities in the world, with fans flocking from far and wide to see the setting for their beloved show.

It’s easy to understand why visitors and location scouts are drawn here. Located at the southern tip of the long, narrow country, Dubrovnik absolutely earns its nickname the Pearl of the Adriatic, with pebbly beaches, crystal-clear blue waters and imposing medieval walls.

A private city walking tour offers a good introduction to the tightly packed snarl of narrow cobblestone streets. My guide, Katica, pointed out the Franciscan monastery that houses one of Europe’s oldest pharmacies, as well as the elegant Baroque Jesuit Staircase, where Cersei Lannister took her walk of shame. (For serious Game of Thrones fans, I suggest a themed tour lead by a crew member who worked on the show.)

The literal high point of the tour is a stroll around the soaring city walls. I suggest going in the evening, after the large tour groups have left, when you can enjoy the walk in relative solitude. Built in the 1400s to defend from the Ottomans, they’re wide enough for several people to stand abreast and offer sweeping views of the city.

You’ll notice that the terracotta tile roofs are a motley mosaic, some aged to a dark brown and others still vibrant orange. According to Katica, the brighter tiles date from the war in the 1990s, when the city was shelled, and more than half of the houses had to be rebuilt.

The city is also a good base for exploring the much less crowded countryside in southern Croatia. You could have a traditional peka lunch at a private home or take a guided cycling trip through the area’s vineyards and fields.

In 305 AD, Emperor Diocletian commissioned a sprawling palace where he could live out his twilight years planting cabbages and enjoying the finer things in life. Today, that complex is almost completely intact and makes up the historic core of the city of Split. Modern residents live in the same apartments where Diocletian once mused about his gardens.

My guide to the city, Maja, explained all this to me as we strolled through the subterranean halls that once housed servants and workers — today, it’s a shopping area and was another filming location for Game of Thrones. In Diocletian's mausoleum, she pointed out the elaborate capitals on the columns and surviving ceiling with its detailed carving. It’s more than 1,700 years old.

Diocletian styled himself as a son of the god Jupiter and in a temple to the king of the Roman gods, you can see a bronze statue of John the Baptist by Croatia’s premier 20th-century sculptor Ivan Meštrović. You can also visit his summer villa outside the city, now converted to a museum that showcases his works.

It’s easy to see why Diocletian chose Split — the water here is glass-clear and a startling shade of vibrant aquamarine. Last time I visited it was in early autumn and still warm and sunny to my New England sensibilities. I went swimming several times, to the locals’ consternation (they thought it was far too chilly to swim). Something about the mineral composition of the Adriatic is different to what I’ve encountered elsewhere, and the briny water quickly dried on my arms to a faintly white salty crust.

Glitzy Hvar is probably the most popular of Croatia’s 1,200 islands, but I admit I prefer Korčula. It’s quieter and more laid back, but still lively enough to warrant visiting for several days. It’s also easy to reach via ferry from either Split or Dubrovnik.

Located on the northern tip of the island, Korčula Town was once a major trading port under the protection of the Venetian Republic. Its small historic heart is bounded by 14th-century walls that rear up from the deep-blue waters of the Adriatic. They enclose a warren of tightly packed cobblestone streets and restored Venetian-style Renaissance buildings built out of a distinctive pale-gold stone. There’s also a waterfront promenade lined with cafes and restaurants where you can take an evening stroll or drink.

If you enjoy history, a guided tour can help you get some sense of the small town’s important role in Renaissance trade, as well as its most famous son, Marco Polo (a claim disputed by Venice). However, it’s also just a pleasant place to wander by yourself. Lines of laundry crisscross the narrow lanes, which are framed by archways and punctuated by bright splashes of flowers in overflowing window boxes.

City residents are proud of their history and I once stumbled on a sword dance performance in the main square. Dancers in traditional costumes played out a mock battle, their swords clashing in regular rhythm to the accompanying music.

Outside of the main town, you can take a guided kayaking tour to explore the island’s many beaches, which are tucked into tiny coves, and a handful of tiny islets scattered just off the coast. My guide, Damir, wore his curled hair in a ponytail and boasted the deep, weathered tan of a man who has spent most of his life outdoors. He led me across the improbably clear sound, where I could see the sandy sea floor below me, to the tiny island of Vrnik.

It doesn’t take long for you to explore the islet, which is just a small scrap of land in the sea. You can have lunch at the schoolhouse-cum-restaurant and art gallery, and visit the abandoned quarry that supplied Korčula’s distinctive stone.

Walking through the waterfalls of Plitvice National Park

Located about two and a half hours’ north (and inland) from Split, Plitvice National Park is a sprawl of deeply forested hills pockmarked with dozens of lakes in a shocking shade of turquoise blue. The park is laced with trails and boardwalks that take you past hundreds of waterfalls that cascade down moss and fern-covered cliffs, earning it a designation as a UNESCO World Heritage Site since 1979.

The boardwalks are there to protect the delicate balance of minerals that keeps the lakes so radiantly blue. You can learn more about the singular ecosystem on a guided walk through the park. My guide, Sondra, explained that the limestone landscape here changes constantly as the flowing water erodes the soft stone in one place only to deposit it as travertine dams elsewhere. Surrounded by a wealth of flowers and the sound of tumbling water, it was hard to imagine a more peaceful place.

However, Sondra explained that the park wasn’t always so tranquil. This was the site of one of the first battles in the war in the 1990s. It took years to remove all the landmines seeded throughout the grounds — officials warn there might be a few left undiscovered in the untrammeled depths of the park, a fact that convinced me to stay on the well-tended paths.

The Italian-style joys of Istria

Once a walled island city, Rovinj’s streets retain the maze-like layout of a medieval city crammed inside limited space. The town has a distinctly Italian feel, with marble paved alleyways that suddenly turn into stairs, sleepy squares and tall Venetian-style townhouses. This isn’t surprising — nearby Venice once ruled here and many of the residents still grow up bilingual, speaking both Croatian and Italian.

Today, the town is connected to the mainland and offers a bounty of seaside pleasures, including restaurants, cafes and gelaterias, as well as plenty of beaches for swimming. The waterfront bars here are a particular treat — you sit on cushions scattered on the rocky shore, so you can enjoy your drink with the clear waters of the Adriatic lapping at your toes as you watch the sun set.

Outside the city, the Istrian countryside reminds me strongly of Tuscany — a deep-green patchwork quilt of forests, farms and vineyards, laid over gentle hills and bathed in mellow golden sunshine. You’ll find the same sort of food and farms here, too, including olive oil, wine and truffles.

A gourmet driving tour of the region includes a truffle hunt (read our guide to Croatian food for more details), as well as a stop at a small family-run olive orchard, a hilltop artistic town and a visit to the Kobola winery. Dating back to 1891, this historic winery is known for its practice of fermenting and aging wines in terracotta urns.

One of the giant urns (called amforas in Croatian) stands in front of the wide stone building, its earthy orange contrasting with the sky-blue wooden shutters. After a tour of the facility, my hostess led me out to a table overlooking the vines for a tasting. Of the five bottles, I liked the rosé best. Dry and easy to drink, its strawberry and raspberry notes complemented the sunny, summery day.

Read more about trips to Croatia 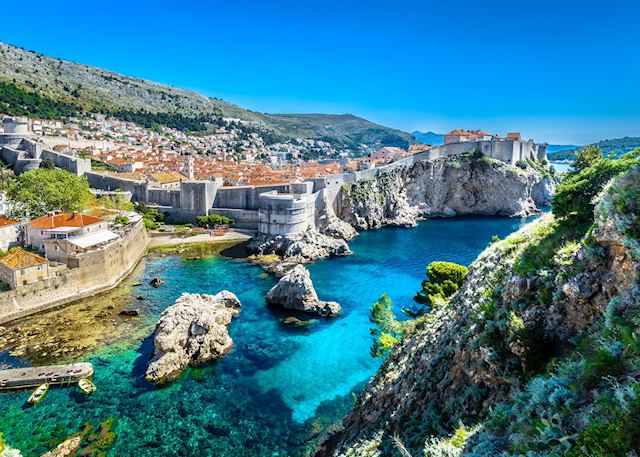