One of the Mediterranean’s most endearing cities, Split marries tradition with cosmopolitan exuberance. It’s Croatia’s second largest city, and home to the Diocletian Palace, a 1,700-year-old UNESCO World Heritage Site. The city now buzzes with thriving bars and restaurants in a living testament to the endurance of the city and its people.

Backed by coastal mountains and looking out over the turquoise Adriatic, Split’s setting is equally impressive. With a string of nearby islands to explore, a host of museums, and a large forest park, there’s plenty to keep you entertained.

Split might be crowded, but it’s for an excellent reason. Diocletian’s Palace is simply amazing — how often do you get to wander through a Roman imperial palace? It’s also a great base for visiting the glitzy islands of Hvar and Korčula.

Things to see and do in Split 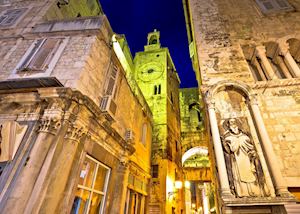 Established in the 3rd century BC as a Greek trading settlement, Split became an obsession for Roman Emperor Diocletian, who built an elaborate fortified town and imperial residence here in 295 AD. Diocletian’s Palace, as the complex became known, contains a warren of narrow streets and courtyards and over 200 buildings, which have been transformed to serve more modern purposes.

The imperial apartments became medieval tenements, Diocletian’s mausoleum is now the cathedral, and the Temple of Jupiter became a baptistry. Today, the palace remains central to Split society with shops, cafés, bars, restaurants and small apartments giving it an atmosphere quite unlike any other Roman ruins you may encounter.

Roman emperor and Christian persecutor Diocletian was interred here in 311 AD, but in the 5th century his mausoleum was converted into a church dedicated to one of his victims. An arcade of 24 columns still encircles the octagonal building, now the Saint-Domnius Cathedral, while a Romanesque bell tower stands beside it.

Inside, many details date to the 13th century such as the pulpit, choir seats, and most impressively, the detailed carvings of the life of Christ on the wooden doors. You can climb the bell tower for views over the city, descend into the crypt, or view the manuscripts, robes and icons in the cathedral treasury.

Opposite the cathedral is another of the palace’s most significant buildings, the Temple of Jupiter. A beheaded Egyptian sphinx made from black granite guards the door of the temple, which was converted into the cathedral’s baptistry in the 6th century. The building remains largely intact with intricate decoration around the doorways and on the coffered barrel vault inside.

Although the statue of Jupiter is long gone, it has been replaced by a modern bronze of Saint-John the Baptist by Croatian sculptor Ivan Meštrović. Nearby is a baptismal font made from stones taken from the cathedral’s altar screen.

Set in a Gothic-Renaissance mansion in the northeast corner of Diocletian’s Palace is the City Museum of Split. The building was once home to the respected Papalić family and now explores the history of the city state between the 12th and 14th centuries and its time under Venetian rule in the 15th and 16th centuries.

Along with Romanesque sculptures from the cathedral and weapons used to defend the city, there’s a gallery dedicated to Emanuel Vidović, one of Croatia’s most important modern painters. Perhaps more interesting though, is the 15th-century interior of the house itself with the dining room furnished as it would have been when it was a family home. 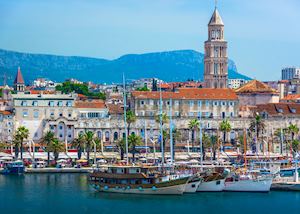 Enclosed on three sides by a deep red, neo-Renaissance building known as the Prokurative, Republic Square is a large colonnaded space that acts as a meeting and cultural performance space. The square is open to the waterfront on the fourth side with sweeping sea views and is decorated with stone reliefs on the west side.

The lack of motifs on the eastern side is attributed to the architect missing his native Venice so much that he returned home before finishing the project. Running along the south of the square is the Riva, Split’s vibrant seafront promenade which is lined with palm trees, shops and cafés.

For an overview of the city and its port, take a hike up Marjan Hill to the west of the city. Pine forests offer shade from the heat and when you reach the summit at 178 m (584 ft) you’ll be rewarded with panoramic views of the city, coast and nearby islands.

Also on the hill is the 13th-century St Nicholas’ Chapel, a 6th-century Jewish cemetery and caves once inhabited by Christian hermits. Return to the city on the pathway toward Kašjuni beach and you can cool off with a dip in the sea.

Split is an appealing year-round destination but is at its finest between April and June and September and October when warm, sunny days and quieter streets facilitate leisurely meandering. In July and August, the weather can be very hot and the streets are crowded with visitors, while between November and April many of the water-based activities are closed.

Our itineraries will give you suggestions for what is possible when you travel in Split, and they showcase routes we know work particularly well. Treat them as inspiration, because your trip will be created uniquely by one of our specialists.

Our expert guides to exploring Split

Written by our specialists from their own experiences of visiting Split, these guides will help you make the most of your time there. We share both our practical recommendations and the best ways to appreciate Split at its best.

We’ve selected a range of accommodation options for when you visit Split. Our choices usually come recommended for their character, facilities and service or location. Our specialists always aim to suggest properties that match your preferences.

Our specialists seek out authentic ways to get to know the places that could feature in your trip. These activities reflect some of the experiences they've most enjoyed while visiting Split, and which use the best local guides.