The oldest and largest national park in Croatia and the star of many international marketing campaigns, Plitviče Lakes National Park is the country’s most popular destination. The park protects 16 crystalline lakes linked by a series of waterfalls that wind their way through forest and a limestone karst landscape. With miles of scenic walking, boat tours, great plant diversity and the presence of endangered wildlife, the park makes an engaging destination on many levels. 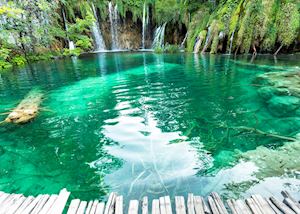 Set in the mountainous karsts of central Croatia, the Plitviče Lakes have a naturally scenic setting, but it was the unusual sedimentation of chalk in the forest that made this place a UNESCO World Heritage Site. With the chalk forming travertine barriers that grow progressively in size, the lakes, which are all part of one water system, are separated by unusual terraces of soft rock.

There are two clusters of lakes in the park. The 12 larger upper lakes have gently sloping shores, while the four lower lakes are smaller but more dramatic, with deep canyons and steep walls.

Winding boardwalks and footbridges meander through the park, linking the lakes and their waterfalls in a series of scenic trails that make for leisurely hiking with rewarding views. The constantly changing light and mineral levels in the lakes contributes to their reputation for ephemeral hues, with the waters changing from emerald to green, gray and blue depending on the time of day or year.

The deep Kozjak Lake is the largest in the park and the lowest of the upper lakes. Around its edges the waters appear turquoise while its heart is sapphire and pierced by a bosky islet. Small boats depart from the pier here and take visitors to the upper and lower lakes.

These boats, as well as free shuttle buses, reduce the amount of walking needed while still allowing you to see the most scenic parts of the park on foot. To see all the lakes from the trails you’ll need to plan on spending about six hours walking. 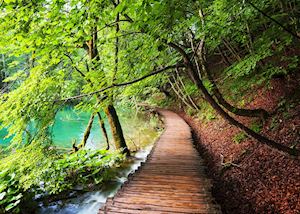 Getting out onto the quieter trails on foot, though, affords a greater chance of seeing some of the park’s elusive wildlife. Walking through the beech, spruce and fir forests, you’ll notice a range of plant life. The many microclimates, mineral deposits and altitude changes support a variety of species, including 55 different orchids.

Near the end of the lower lakes is Veliki Slap, which, at 78 m (256 ft) is the highest waterfall in the county. Cascading over the sheer drop, the waterfall is at its most impressive in winter, when it freezes into a giant ice sculpture, and in spring, when the winter run-off ensures the water is at its most thunderous.

Although cycling is not allowed in the park itself, there is a series of managed cycling trails around its edge that offer sweeping views of the park and the karst landscape of the region.

Barać’s Caves, 15 km (9 miles) northeast of the park, make a good destination for cyclists. Set in the same karst limestone landscape, with prehistoric stalagmites and stalactites, the four caves opened in 1892 and contained the remains of a prehistoric cave bear and a bronze bracelet dating back to 7th century BC.

The Plitviče Lakes are a year-round destination. They’re popular during Croatia’s summer months, so it’s best to avoid visiting between July and September. Between April and June, the forest’s vibrant greenery makes it a good time to visit. The changing shades of the leaves in late September and October, as well as the winter snows, can be striking to see.

Our itineraries will give you suggestions for what is possible when you travel in Plitviče Lakes, and they showcase routes we know work particularly well. Treat them as inspiration, because your trip will be created uniquely by one of our specialists.

Written by our specialists from their own experiences of visiting Plitviče Lakes, these guides will help you make the most of your time there. We share both our practical recommendations and the best ways to appreciate Plitviče Lakes at its best.

We’ve selected a range of accommodation options for when you visit Plitviče Lakes. Our choices usually come recommended for their character, facilities and service or location. Our specialists always aim to suggest properties that match your preferences.

Our specialists seek out authentic ways to get to know the places that could feature in your trip. These activities reflect some of the experiences they've most enjoyed while visiting Plitviče Lakes, and which use the best local guides.

Speak to a certified Croatia specialist to start planning your tailor-made holiday...