Known as one of Croatia’s most fashionable destinations, Hvar island offers far more than shimmering blue waters and top-notch restaurants. Along with its lively port town of the same name, you’ll find quiet fishing villages, Gothic and Renaissance palaces, and some of Croatia’s best wineries.

The island’s interior remains little changed since the ancient Greeks cleared heavy rocks to create arable terraces for olives, grapes, and lavender. Hiking, cycling or driving around the island gives you a good sense of how it would have looked in previous centuries.

Just 90 minutes from Split by ferry, Hvar and its offshore islands offer plenty of cultural interest as well as an array of isolated beaches and hidden coves.

When I lived in Hvar town, I loved the glamorous bustle of the cafés, restaurants and boutiques. But really, to appreciate the island I think you need to get out of town and visit the wineries.

Things to see and do in Hvar 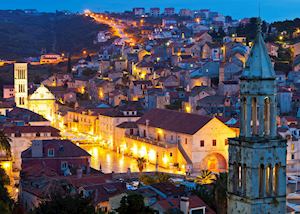 The island’s hub and its liveliest spot, Hvar town has a well-preserved historic core and a reputation as a stylish hang-out for celebrities and the well-heeled. Thirteenth-century walls surround winding, traffic-free streets lined with elaborate 16th-century palaces, but the town’s most imposing building is the Spanish fortress built high on a hillside to defend this strategic natural port.

Hvar’s main square, the Pjaca, is home to several of the town’s grandest buildings including the Cathedral of Saint-Stephen and the Bishop’s Palace. Beyond the old town, you’ll find white pebbly beaches and secluded coves.

With a more leisurely pace than Hvar town and a scenic setting on a deep inlet, Stari Grad sits on Hvar’s northern coast and was founded by the Greeks in 384 BC. Its name means ‘Old Town’ and many of its buildings date back hundreds of years.

Set along narrow lanes leading away from the waterfront, its notable buildings include Tvrdalj, a fortified house built by local aristocrat Petar Hektorović in the 16th century. Its showpiece is a well-maintained Renaissance garden.

Stari Grad Plain, the agricultural region around the town, is a UNESCO Cultural Landscape whose stone walls and terraces were laid out by the ancient Greeks. They’ve changed little since.

Set on the north shore of Hvar and surrounded by thick pine forests, the little fishing town of Vrboska fans out on two sides of a long, narrow bay. Fishing boats bob in the clear water overlooked by the Renaissance and Gothic-style houses that flank either side of the inlet. Their reflections glitter between the little stone bridges that link the opposite sides of the bay, while fishermen tend nets and pull their catch to shore.

The town has a small fishing museum, but its greatest cultural treasures are in the Church Fortress and the 15th-century Church of Saint-Lawrence which houses some fine Renaissance and Baroque artworks. 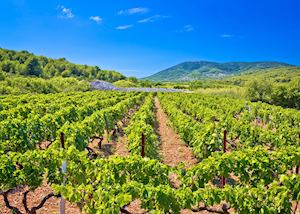 Wine production on Hvar dates back more than 2,000 years to the ancient Greeks who used the port at Jelsa as a trade hub. Although production is more limited today, the quality of the wines is impressive.

A visit to one of the local wineries, some of the best in Croatia, reveals a little of the history of the island. The Tomić winery has Romanesque-style cellars producing high-quality reds, whites and rosés, and is well known for its prošek, a traditional Dalmatian dessert wine, while the boutique Dubokovic winery offers more intimate wine tastings in a candlelit cellar.

Stretching out across the bay in front of Hvar town, the Pakleni Islands are a string of wooded islands where you’ll find hidden beaches, stone cottages and calm lagoons surrounded by clear sapphire waters.

The largest island is Sveti Klement, best known for its horseshoe bay at Palmižana. Marinkovac has a series of quiet coves and beaches, while Jerolim is known as a popular spot with naturists. Boat and kayaking trips around the islands offer the chance to visit deserted beaches and lagoons and peer down deep into waters renowned for their clarity.

Hvar is at its best between April and June and September and October. The peak summer months of July and August can be very hot and the towns get very crowded, while many of the hotels and restaurants close down between November and March.

Our itineraries will give you suggestions for what is possible when you travel in Hvar, and they showcase routes we know work particularly well. Treat them as inspiration, because your trip will be created uniquely by one of our specialists.

We’ve selected a range of accommodation options for when you visit Hvar. Our choices usually come recommended for their character, facilities and service or location. Our specialists always aim to suggest properties that match your preferences.

Our specialists seek out authentic ways to get to know the places that could feature in your trip. These activities reflect some of the experiences they've most enjoyed while visiting Hvar, and which use the best local guides.